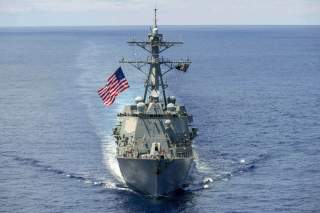 While Russia has employed “Little Green Men” surreptitiously in Crimea, China uses its own “Little Blue Men” to support Near Seas claims. As the U.S. military operates near Beijing’s artificially-built South China Sea (SCS) features and seeks to prevent Beijing from ejecting foreign claimants from places like Second Thomas Shoal, it may well face surveillance and harassment from China’s maritime militia. Washington and its allies and partners must therefore understand how these irregular forces are commanded and controlled, before they are surprised and stymied by them.

China has long organized its civilian mariners into maritime militia, largely out of necessity. Recent years have seen a surge of emphasis on maritime militia building and increasing this unique force’s capabilities; however it is difficult to ascertain who or what entity within China’s government has ordered such emphasis. One can point to Xi Jinping’s visit to the Tanmen Maritime Militia in 2013, after which maritime militia building oriented toward the SCS has seen growth in places like Hainan, Guangdong, and Guangxi. Yet local militia training and organization plans prior to this date had already emphasized the training of maritime militia units.

China’s militia has two major subcomponents: an “ordinary” reserve of registered male citizens akin to the U.S. Selective Service pool, and a “primary” force more readily mobilized to respond to various contingencies. The primary force receives dedicated resources, troops demobilized from active duty, and training. Within the primary force, maritime militia units—formed solely at the tactical level of organization—are smaller and more specialized on average than their land-based counterparts. Within the maritime militia, a small but growing elite set of units are the ones most likely to be deployed on more sophisticated operations that involve monitoring, displaying presence in front of, or opposing foreign actors. They do so in part by supporting China’s navy and coast guard in such efforts. Some cities with large mobilization potential—i.e., a large maritime industry or fishing community—will form battalion-sized units. Most localities create company-sized units, however. These companies are divided into platoons and squads, with the smallest grouping based on each individual vessel.

It must be emphasized that maritime militia command authority resides within multiple entities, including both the local military organs (MD, MSD, PAFD) and their government/party counterparts. This is referred to as “双重领导” in Chinese, connoting the “dual-leadership” system by the local military and government’s principal leaders. It is thus common to see a city party secretary acting in his role as first-party secretary of the local military party committee overseeing the PAFD’s efforts at managing the maritime militia. An easily visible example: Sansha City’s mayor/party secretary Xiao Jie and his military counterpart Commander Cai Xihong both attended the founding ceremony of Sansha City’s Maritime Militia Company. “Dual-leadership” is further reinforced by the fact that local governments fund militia construction.

Since both military and government leaders are involved in local armed forces building, the National Defense Mobilization Committee System (NDMC) established at each corresponding level plays the critical role in binding them into one decision-making body. The NDMC brings together these leaders to organize, direct, and coordinate nationwide national defense mobilization, ensuring that national resources can be rapidly mobilized for defense or emergency needs. Local NDMCs can also establish civilian-military joint command structures facilitated by national defense mobilization communications networks. As a militia force, the maritime militia would need a specified duration to mobilize and gather in the area designated by their superiors. Localized mobilization orders transmitted to the maritime militia could originate from a variety of sources. Regardless, they would be sent down the chain and delivered to the maritime militia via the PAFDs managing them.

While county-level PAFDs are manned by active duty PLA officers, grassroots-level PAFDs are manned by civilian government cadres. Training and education efforts target a “select group of militia cadres” (专职人民武装干部), units’ leaders (company, platoon, and squad) and “information personnel” (信息员). This group of personnel forms the backbone of the maritime militia and helps implement party control, command and control, and maintain unit cohesiveness. Essential to successful command and control of the maritime militia are the “boat captains”—often termed “船老大”—and the information personnel, which provide dedicated personnel for onboard leadership, identification, and communications. This is further facilitated by increasing incorporation of satellite communications technologies into the fishing fleet and thereby into the maritime militia.

Although maritime militia are built out of the regular command structure of coastal military organs, they also serve naval and maritime law enforcement forces (MLE). The command relationships for the maritime militia may vary with the mission they are employed in. For example, maritime militia reconnaissance detachments report their findings directly to MD Headquarters, while another detachment summoned to assist with maritime law enforcement would be commanded by the Chinese Coast Guard (CCG) “in cooperation with their MD.” Similarly, support detachments serving roles for China’s navy would be under the command of the PLA Navy in cooperation with the detachment’s MD. It is clear that the maritime militia are controlled by their land-based local military organs, an arrangement flexible enough to serve a variety of supporting roles for the Chinese Navy and MLE forces. Many Chinese sources use a phrase that succinctly states such arrangements: “the military organ expresses its requirements, the NDMC coordinates, and the government implements” (军事机关提需求、国动委搞协调、政府抓落实), referring to the cooperation that occurs between civilian and military leaders in building the maritime militia.

More than One Way to Tie the Knot:

Organization and command of maritime militia likely varies by locality. This stems largely from a given locality’s maritime industry and its influence on militia composition, requiring local leaders to plan maritime militia missions from what is available. Making command and decision making arrangements based on local conditions is critical to the proper functioning of such a force. Many ad hoc leading small groups are formed to handle a certain issue area, or provide temporary guidance for certain missions. The multiple organizations supporting maritime militia building (e.g., the CCG, Fisheries Bureau, and Maritime Safety Administration) are likely to enter these command structures in some fashion.

The 300,000-troop reduction that Xi announced at Beijing’s September 3 military parade will likely send additional personnel to the maritime militia, and could even further shape their command and control. Specifically, efforts to streamline the current long reporting chain through land-based forces might ensue. All the more reason that it’s vitally urgent to understand how China’s “Little Blue Men” get their sailing orders, and what those orders might be.