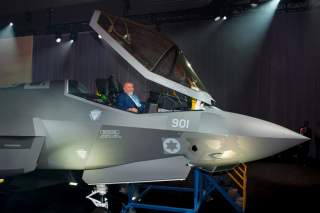 Lockheed Martin has rolled out the first Israeli F-35A Joint Strike Fighter at its plant in Fort Worth, Texas. The stealthy new fighter—which will be called Adir in Israeli service—will afford Tel Aviv a potent new deterrent capability against potential foes in the region—especially as advanced new Russian and Chinese-built surface-to-air missiles proliferate in the area. Iran, for example, is set to receive the powerful Almaz-Antey S-300PMU-1 series air defense system any day now.

“Israel is proud to be the first country in the area to receive and operate it,” said Avigdor Liberman, Israel’s Minister of Defense in a statement. “The F-35 is the best aircraft in the world and the choice of all our military leadership at its highest level. It is clear and obvious to us and to the entire region that the new F-35, the Adir, will create real deterrence and enhance our capabilities for a long time.”

The Israeli Air Force—which will be the Israel Defense Forces component responsible for operating the F-35—is looking forward to accepting the new stealth fighter into its fleet.  “As a pilot who has flown more than 30 years in a great variety of aircraft, I had the privilege of flying the F-35 simulator in Fort Worth and it was like holding the future in my hands,” said Brig. Gen. Tal Kelman, Israeli Air Force chief of staff said. “The unique combination of split-edge technology, lethality and the amazing man-machine interface will lead the world to the fifth generation.”

Tel Aviv’s aircraft will be modified to incorporate various pieces of Israeli hardware such as indigenous weapons and electronic warfare apparatus. The exact nature of the alterations remain murky—but an earlier impasse over the F-35’s source codes seems to have been solved through the addition of a plug-and-play feature which enables new capabilities to be incorporated without U.S. assistance. The United States, however, will not release the F-35’s source codes to anyone—including Israel.

“We’re honored to partner with Israel and help strengthen the deep and lasting partnership between our two nations,” said Marillyn Hewson, Lockheed Martin chief executive officer. “The F-35 will help Israel remain a beacon of strength and stability in the region and support a safe and secure homeland for generations to come.”

Israel has committed to buying 33 F-35A through the U.S. government’s Foreign Military Sales (FMS) vehicle and it has the option to buy 17 more jets. But it is not clear how many more jets Tel Aviv will eventually buy—Israel paid for the first batches of F-35 through generous U.S. military aid packages. In earlier years, Israel had considered a total purchase of as many as 75 of the expensive new stealth fighters.

More recently, however, Tel Aviv has expressed misgiving about the cost and capability of the stealthy new jet. Indeed, in recent months, Israel has inquired about the purchase of additional Boeing F-15I Strike Eagles—thus it is unclear if the Middle Eastern nation will buy more of the stealthy single-engine jets in the immediate future.

Lockheed Martin has delivered more than 170 F-35s to the U.S. military and allies around the world, which have flown a total of more than 60,000 flight hours.