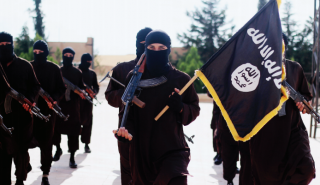 A small explosion in a Jakarta shopping center late last month has Indonesian authorities concerned that local radicals may be adopting tactics from ISIS. The explosion in ITC Depok, a tech shopping center in the Greater Jakarta area, came from a poorly made device consisting of batteries, paint tins and wires inside a cardboard box. The homemade bomb, left unattended in a men's bathroom, appeared not to have detonated properly, and no one was hurt. But what has alarmed police and anti-terror forces is that the device contained a substance known to be used by ISIS: chlorine gas.

Indonesia's National Police, like terrorism expert Sidney Jones, see the use of chlorine gas in the failed attack as a warning that ISIS influence could pose a threat to Indonesia's security, especially with the possible return of ISIS supporters from the Middle East. Police say 514 Indonesian ISIS supporters are known to have left for Syria and Iraq, though this number could be outdated, since it has remained the cited figure since the end of last year. Other reports show a growing number of Indonesians attempting to join ISIS.

Indonesian media this month has been focused on the disappearance of sixteen Indonesian nationals who joined a tour group to Turkey in January. Three families—including men, women, children and infants—separated from their tour group at the Istanbul airport, saying they wanted to stay with family members in Turkey for a few days before rejoining the tour. They kept in contact with the tour guide for two days before disappearing. Earlier this month, Turkish authorities detained sixteen people believed to be Indonesian nationals (several did not carry passports) as they attempted to cross the Syrian border. Strangely enough, Turkish and Indonesian authorities have confirmed that these were not the same sixteen who went missing in Istanbul. The group also consisted of families, including children.

Assuming that the arrested Indonesians were attempting to cross into Syria to join ISIS, the fact that they were traveling with their families lends weight to the theory advanced by Princeton University Professor of Near Eastern Studies Bernard Haykel in an interview with The Interpreter's Sam Roggeveen last week. Professor Haykel argued that those leaving their home countries to join ISIS see it as a permanent relocation, which is why they tend to bring their families along. In contrast to Al Qaeda supporters, it would appear that ISIS supporters have no intention of returning to their home country as trained terrorists.

Also unlike Al Qaeda, the struggle of ISIS has been described as a “war within Islam” between extremist Sunnis and moderate Muslims of various creeds. It's no wonder this ideology has found little support among Indonesia's majority-moderate Muslim population. Though the number of ISIS supporters is growing, it remains a fraction of the total population of 250 million, even smaller than the fraction of the Australian population joining the foreign ranks of ISIS. Public notices rejecting ISIS have been displayed in Jakarta neighborhoods since last year. The central government has officially denounced the group, as has ASEAN.

The question now being asked in Indonesian media is whether those found to have joined ISIS should have their Indonesian citizenship revoked. The Republic of Indonesia has a long history of rejecting groups that want to establish an Islamic state in its territory, a struggle that predates the country's independence. Supporters of ISIS are viewed in a similar way to separatists that threaten the unity of the state, a position that is not tolerated.

Nonetheless, the use of chlorine gas in Depok and the arrival of Indonesian citizens on the Syrian border show that the ISIS ideology remains a cause for concern in relation to Indonesia's security.

Catriona Croft-Cusworth holds degrees in Arts and Asian Studies (with a specialisation in Indonesian studies) from the Australian National University, and works as a media professional in Jakarta. This article originally appeared on the Lowy Interpreter, here.