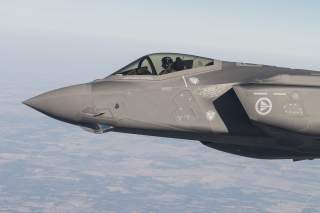 Japan is responding to North Korea’s ballistic missile and nuclear weapons programs by adding air-launched cruise missiles to its arsenal.

“We are planning to introduce the JSM that will be mounted on the F-35A as ‘stand-off’ missiles that can be fired beyond the range of enemy threats,” Japanese defense minister Itsunori Onodera told reporters.

The addition of the new medium range air launched cruise missiles is a break with Japan’s traditional post-World War II defense policy. Previously, Tokyo has limited itself to purchasing mostly weapons designed to defend itself against ships and aircraft with ranges of less 186 miles. Japan has not previously purchased offensive long-range precision strike weapon since the end of the Second World War.

Tokyo insists that its planned purchase of the JSM, JASSM-ER or its anti-ship AGM-158C Long Range Anti-Ship Missile (LRASM) derivative does not constitute a change in Japanese defense policy. Despite its proposed cruise missile purchases, Tokyo insists that the weapons will be used strictly for defense—strikes on enemy territory will be left to American forces. “Our way of thinking has not changed at all,” Onodera said.

Onodera insists that the missiles will be used to protect Japan Maritime Self-Defense Force Aegis destroyers from enemy attack. The Japanese defense minister also suggested that the weapons could be used to defend the Japanese islands with standoff a defense by engaging enemy forces far offshore. “Dealing with enemy surface forces or landing forces before they get close,” Onodera said.

However, despite Onodera’s insistence, the JASSM-ER and the F-35/JSM combination offers Japan a formidable offensive capability to strike not only against North Korea but also Russia and China, which are both next door. With a pair of JSM missiles onboard and a full load internal fuel, the F-35A would be able strike at targets 900 nautical miles away—or more with aerial refueling.

The JASSM-ER combined with the F-15’s huge payload and range offers similar standoff offensive capability. Thus, while Japan might deter North Korea to some extent, Tokyo might also raise the level of anxiety in Beijing, which eyes the pacifist nation with suspicion due to its wartime atrocities in China.

Onodera is likely deliberately playing down the offensive role that the JASSM-ER and JSM might play in Japan’s arsenal for domestic political reasons. Japanese prime minister Shinzo Abe’s nationalistic Liberal Democratic Party government, which has favored a more muscular foreign policy, is likely to face stiff resistance in the Diet to the proposed missile purchases from opposition politicians who are not in favor of watering down Tokyo’s pacifist constitution.