Beware, North Korea: The Air Force is Preparing the F-22 for 'War' 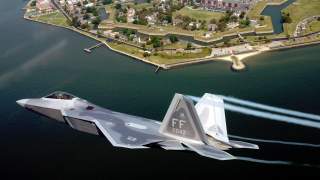 Current operational testing of the F-22 is focused upon a 3.2B software upgrade for the fighter, allowing it to quickly integrate weapons upgrades, Air Force officials said.

"The F-22 Increment 3.2B program is a hardware and software upgrade to enhance the lethality of the F-22 through the employment of the AIM-120D and AIM-9X missiles.  Recent testing enabled the program to complete developmental flight test and enable its entry into the Initial Operational Testing and Evaluation (IOT&E) phase of the program.  During this phase, tests are conducted on production representative aircraft to determine whether the upgrade is operationally effective and suitable for intended use by pilots and maintenance personnel.  The results of IOT&E will support the decision to proceed into full rate production," Capt. Emily Grabowski, Air Force spokeswoman, told Scout Warrior.

The most recent contract award was to Raytheon Missile Systems as the prime contractor in Sep 2017, for software upgrades that will continue to improve the performance of the AIM-120D in an electronic attack environment, Grabowski said.

"The AMRAAM program continues to increase capability through planned software upgrades to ensure the family of missiles remains viable against ever-evolving threats,"  Grabowski added. "As the most recent AMRAAM missile for the Air Force, the AIM-120D, was operationally fielded in 2015, as a small, light, fast missile with improved capabilities against very low and high-altitude targets in an electronic attack environment.