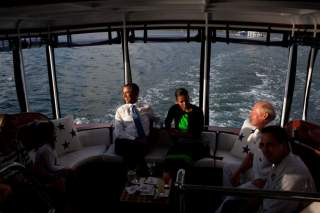 The Obama administration yesterday announced its intention to designate a vast portion of U.S.-controlled areas of the Pacific Ocean as a nature preserve.  Although packaged as part of the president’s second-term push to enact environmental regulations using his executive powers, the plans also have sizable implications for U.S. foreign policy in the Asia-Pacific.

Specifically, Obama is considering expanding the existing boundaries of the Pacific Remote Islands Marine National Monument (MNM), a marine reserve created by George W. Bush just days before leaving office in January 2009.  At most, Obama could extend the marine reserve’s boundaries up to 200 nautical miles from the coastline of the U.S. islands contained within the conservation zone: Baker Island, Howland Island, Jarvis Island, the Johnston Atoll, the Palmyra Atoll and Wake Island.  Doing so would make the Pacific Remote Islands MNM the biggest marine reserve in the world.

Protecting ocean environments is argued to be essential for the long-term health of the planet.  Few dispute this, although in the past MNMs have been lambasted for being mere “paper parks” in which fishing can still take place in practice—more intended for public consumption than true environmental conservation.  Instead, criticism of the plans has focused upon the administration’s use of executive powers.  Republican law-maker John Fleming, for example, already has accused Obama of acting like an “imperial president” for refusing to go through Congress.

Yet beyond these debates about technicality about procedure there are other implications of vast marine protection zones that warrant consideration.  Symbolically, the creation of environmental protection zones in the Central and Western Pacific is a powerful signal of America’s long-term commitment and presence as a Pacific power.  While not as provocative as China’s designation of an Air Defense Identification Zone in the East China Sea, Washington’s marine protected areas do fulfill a similar—albeit non-military—purpose by pronouncing, formalizing and entrenching U.S. territorial pre-eminence in the world’s biggest ocean.

Moreover, it should be noted that many of the islands contained with the MNM system are current or former military bases: Wake Island and the Johnson Atoll both rest within the existing boundaries of the Pacific Remote Islands MNM, while other MNMs cover Midway Island (the Papahānaumokuākea MNM) and Guam (the Mariana Trench MNM).  The Pacific conservation zones thus have military implications.  Active bases are given an additional layer of seclusion while mothballed installations are guarded against conversion to civilian use.

This logic of military conservation works on land as well as at sea.  Wildlife refuges cover 17.5 percent of Guam and all of Midway Island, for example.  Written into the environmental regulations are provisions that, should protected land ever be required for military purposes, then the security interests of the U.S. will predominate and the Pentagon will be given authorization to (re)convert territory for military use.  This is currently salient in the case of Guam, which stands to receive thousands of additional U.S. troops owing to the downsizing of bases in Okinawa and thus will likely need to reclaim refuge overlay in order to house the influx of personnel.  Other (former) U.S. bases on Midway, Wake and the Johnston Atoll could similarly be resurrected in the event of a worsening geostrategic environment in the Asia-Pacific.

Whatever the environmental benefits of establishing marine protected areas in the Pacific, then, there are several political and military implications that are worth considering.  That President Obama can even consider 782,000 square miles of ocean into a conservation zone is testament to how expansive and deep is the U.S. presence in that part of the globe; that so many current, former and future military installations operationally benefit from the conservation is a reminder that only one country boasts the real estate to establish effective maritime control there.

America’s marine national monuments are monuments to the country’s gargantuan geopolitical and territorial standing in the Central and Western Pacific as much as anything else.