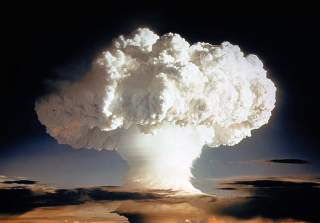 Recent reports of collapse at the North Korean nuclear test site under Mt. Mantap provide a sobering reminder of the sheer power of nuclear weapons. North Korea’s sixth (and final?) test had a likely yield well above one hundred kilotons, enough to corroborate the regime's claim of thermonuclear capability.

Really big nuclear explosions require the lightest elements rather than the heaviest. Fission explosions rely on the energy released by splitting heavy atoms of uranium or plutonium into lighter elements, and require lots of fissionable material. Fusion explosions release vastly more energy than fission blasts by fusing together lightweight hydrogen nuclei into slightly heavier helium. However, getting hydrogen to fuse requires immense temperatures and pressures, which only a fission explosion can readily generate.

Both the United States and the Soviet Union saw fusion or thermonuclear weapons as the vital next step in trumping each other's nuclear arsenals. In pursuit of weaponizing the power of the sun both nations created the largest artificial explosions yet witnessed by humans. Edward Teller, who along with Stanislaw Ulam conceived the successful H-bomb concept, began thinking about “the Super,” as it became known, even as the Manhattan Project struggled to build a working fission bomb.

As the Korean War flared both the United States and USSR accelerated their nuclear programs. Despite serious reservation by some in the nuclear weapons community, President Truman launched the U.S. thermonuclear effort in 1950. Soviet scientists pursuing a different design had access to ideal fusion fuel—the chemical compound of the lightest metal, lithium, and a heavy form of the lightest gas, hydrogen. This powdery substance, lithium deuteride, itself came in two "flavors," one incorporating the Lithium-6 isotope and another incorporating Lithium-7. The Soviets swiftly built facilities for manufacturing Li-7 deuteride while the Americans, lacking sources of Li-7 focussed on liquid deuterium.

By late 1952 the Soviets had tested their first fusion-driven device with limited success. After an immense investment the Americans succeeded in producing abundant liquid heavy hydrogen (deuterium) and an eighty-ton science experiment to use it. Not in any sense a weapon, the Mike (for "megaton") shot of Operation Ivy yielded 10.8 megatons of explosive force when detonated November 1, 1952. Ivy Mike proved the Teller-Ulam design by leaving a mile-wide hole in Eniewetak Atoll.

And yet, Ivy Mike was only the fourth biggest U.S. nuclear test.

Operation Ivy’s other test puts Mike in perspective. Weapons designer Ted Taylor thought the H-bomb to be overkill and to prove his point designed the biggest pure-fission bomb ever tested. Ivy King (for “kiloton”) yielded five hundred kilotons at the cost of four critical masses of uranium alloy—so much fissile material that the weapon had to be transported with chains of neutron-absorbing boron and aluminum to prevent a premature chain-reaction. Ivy King worked, but wasn't the future.

By early 1954, hot on the heels of the Korean conflict, the United States had new H-bomb designs ready to test. The six-shot series of Operation Castle would prove these new designs at Bikini Atoll. As with Operation Ivy, an armada of ships and an army of people shipped out the Central Pacific to dredge islands, build test equipment and ready bunkers.

The bombs prepared included a weaponized version of the Ivy Mike device—the liquid-fueled EC-16 hydrogen bomb, along with others trying out the new American dry fuel made of mixed Li-6 and Li-7 hydride. Scientist thought Lithium-6 was far less reactive to neutrons thrown from fission primaries and thus expected yields of six to ten megatons.

The size of the explosion resulted from Li-6's previously-unknown affinity for neutrons; the supposedly regular-gas bomb fuel turned out to be premium hi-test. Nature wasn't involved in another factor, the wind: despite warnings from meteorologists Test Director Alvin Graves ordered the shot fired. Graves, who had survived near-lethal radiation exposure, had little patience with those urging caution.

Despite the disaster the U.S. military carried on with Operation Castle, and conducted two of the other three biggest American tests. Unlike the land-based and heavily instrumented Castle Bravo test, Castle Romeo tested a weapon in its bomb casing mounted aboard a barge afloat in Bikini’s lagoon. The first test destroyed most of the test equipment on Bikini, and big test were blowing holes in Bikini’s reef. Because it used pure Li-6 hydride the Romeo shot was almost canceled; it became the third biggest American test at eleven megatons yield.

Castle Yankee was the second biggest American test at 13.5 megatons. As the fifth test of Operation Castle, Yankee again used a bomb casing on a barge, and again used the Li-6/Li-7 mixed fuel used in Castle Bravo. The 13.5 megaton blast produced a fireball four miles wide; 2.5 megatons of the 13.5 came from pure fusion alone.

The Castle Bravo, Romeo and Yankee tests proved the H-bomb design that became the first U.S. “city-killers”: high-yield thermonuclear weapons capable of completely destroying a target even if the weapon missed by miles. These Mk17 and Mk 24 bombs looked the part—nineteen feet long, five feet wide, ten tons heavy—big enough for a cowboy to ride into Armageddon.

Weapons development moved fast during those years. Only four years after Operation Castle, Operation Hardtack came to Bikini and Eniewetak Atolls as American weaponeers raced to test refined H-bomb designs before an unofficial testing moratorium announced by President Eisenhower. Hardtack Poplar, the fifth biggest American nuclear test, yielded 9.3 megatons from a bomb that would become the biggest ever deployed by the United States: the Mk-41 twenty-five-megaton three-stage device.

Hardtack Poplar tested only the first two stages, resulting in a very “clean” explosion—one with far less fallout. The third stage of the operational weapon was a internal casing of fissile uranium containing the first two stages; the immense neutron flux from the second-stage fusion explosion causes the third stage to fission and produce huge amounts of energy and radioactive waste. In Poplar the uranium casing was replaced with an inert lead one.

After Operation Hardtack the moratorium on testing delayed new designs, and when US testing resumed in 1962 no tests greater than four megatons are conducted. The United States turned to underground tests at the Nevada Test Site which is unable to contain megaton-class shots. The last known U.S. multi-megaton shot was Cannikin—a five-megaton blast a mile beneath Amchitka Island in the Aleutians.

Really huge nuclear weapons fell out of favor in America as missile accuracy increased. More accurate delivery platforms mean less need for big explosions to kill a target (and smaller delivery vehicles—a big warhead needs a big missile or plane or sub). But historian Alex Wellerstein notes that American bombs could have gotten much, much more powerful without growing bigger:

Could there have been a five-ton fifty Megaton bomb? It’s just as well that it was never (knowingly) explored. After all, the genie, however great, never stays in the bottle.