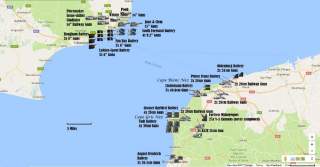 One hundred thirty-six people out of 625 aboard Sambut died.

The Royal Navy sank the flaming wreck with a torpedo. Then on July 24, the German guns damaged the freighter Gurden Gates and hit the Empire Lough, killing the captain and a second crew member, and forcing the ship to ground itself on Dover. The Third Reich’s monster guns failed to sink another ship.

Hitler also screwed up. Even after D-Day, he believed the real Allied invasion force would land at a Calais, not Normandy, causing the heavy guns to remain in place there. Had the Germans got wind of the Allies’ real plans, history might’ve been quite different.

Germany actually continued to strengthen its Calais gun batteries. Engineers began construction of a new underground fortified complex in the village of Mimoyecques, south of Calais. This was to house 25 V-3 Cannons firing from behind sliding armored doors to bombard the city of London 100 miles away.

In late July 1944, American troops broke through German lines in Normandy in Operation Cobra, routing the Wehrmacht field army in Northern France. By the beginning of September, the German garrison around Calais was surrounded.

Most of the Calais guns were incapable of swiveling around to fire inland, so they instead unleashed everything they had at Dover, trying to expend their remaining ammunition on the only target within reach. On Sept. 3, a protracted gun duel hammered the Wanstone Battery, leaving the British guns untouched but leveling many of the surrounding buildings.

The town was getting hit harder than at any earlier time in the war.

The Grosser Kurfurst Battery was the only heavy battery able to fire at the Allied troops in France — which it did to some affect — so it was accorded special attention by over 400 British heavy bombers as well as the British coastal guns.

Then on Sept. 25, the 3rd Canadian Infantry Division launched Operation Undergo to subdue the German garrison around Calais. Though most gun batteries were incapable of firing, they were still defended by machine gun nests, barbed wire and minefields, making their capture no simple matter.

The Canadian 8th Brigade roared toward the batteries at Cape Blanc Nez in armored Kangaroo vehicles, accompanied by the unconventional “Funny” tanks of the British 79th Armored Division.

On Sept. 29, the 9th Canadian Brigade assaulted batteries at Cape Gris Nez. As they approached, the doomed coastal guns fired 50 shells on Dover in a last blaze of destruction, killing five. A 63-year-old woman in a shelter 38 feet underground was the last victim of the Calais guns when a massive shell pierced through a tombstone, collapsing on top of her.

The British guns responded with a counter bombardment greater than any that had come before. The high tempo of fire wore down the barrels of both side’s guns, and British spotter planes had to provide correction for each successive shot.

Finally, the 15-inch Clem landed a killing blow against the №2 gun at the Calais emplacement.

By then, Canadian troops had smashed their way into Cape Blanc Nez. Churchill AVRE tanks flung enormous 290-millimeter demolition charges at concrete casemates, but could not penetrate them. However, the concussions so rattled the gun crews that many eventually surrendered.

One casemate gun swiveled around to fire a final three shots towards Dover before the Highland Light Infantry of Canada swarming on top of it blew the gun up with hand-placed charges.

Those were the last shells fired at Dover in World War II. Afterward, the 3rd Division’s commander sent the German flag from Todt Battery to the mayor of Dover.

With the liberation of the region around Calais, the Dover coastal guns ceased to have much purpose. Winnie and Pooh were dismantled in October and their gun barrels dispatched for use in the Pacific, and the Royal Marine Siege Regiment disbanded.

Jane and Clem lingered on into the 1950s before the British military dissolved its Coast Artillery branch, rendered obsolete by advances in missile technology.

The cross-channel guns at Dover and Calais were among the last behemoths of their kind in a new era of mobile warfare.

They scored few successes despite the vast expense and manpower poured into them.

However, their impact is harder to quantify than mere count of vessels sunk, as the threat they posed forced their adversaries to deal with them or avoid them entirely — at least from a frontal approach.

Today, the concrete fortifications that housed the monstrous guns around Calais and Dover are still partially intact, hardened remnants of a war thankfully long passed.