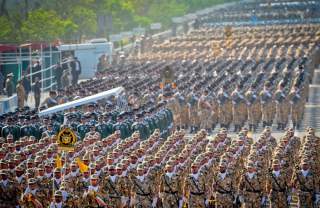 The coming campaign to retake Mosul from ISIS and the increasing instability in Iraq’s government –and the role Iran’s allies and proxies are playing in both situations -- are bringing to light the current state of Tehran’s policies towards its western neighbor. Iran’s investment keeps growing, but the challenges keep mounting. Is Baghdad still on a path to be firmly under Tehran’s influence? Or has the Islamic Republic finally begun reaching the strategic limits in its ability to shape Iraq’s direction?

The state of Iran’s proxy forces in the country, under the direction of Islamic Revolutionary Guard Corps’ (IRGC) Quds Force, is a good place to start. In 2014, Iran may have felt its efforts to create an Iraqi buffer state that could prevent the resurgence of any native Sunni power or the return of an American military presence on its western border had been a relatively great success. The Islamic State proved that wrong, of course. To conduct the anti-ISIS campaign, Iraqi leaders had to raise the huge Popular Mobilization Forces (PMF), with about 100,000 total militia fighters and let the US military back in to augment the inadequate Iraqi army.

Iran was able to keep a strong hand on the process, though. Iran’s most important proxy, the Badr Organization, is deeply integrated into all levels of Iraq’s military and law enforcement. Badr’s commander, Hadi al Amiri, has been given overall control of the PMF on behalf of Iraqi Prime Minister Haider al Abadi. The IRGC reportedly supports about 80,000 of the PMF in some form, including a Badr Organization now doubled in size to 20,000. Iran’s elite unconventional warfare and terrorism groups, Khata’ib Hezbollah and Asa’ib Ahl al Haq are swollen from about 1,000 to 10,000 each. This represents a near tripling of Iran’s direct proxy force in Iraq in the past two years, with another 40 to 60,000 fighters posing a latent threat Iran could call upon if needed.

The PMF cannot win the fight against ISIS alone. The Iraqi Army and Special Forces units, the Kurdish Peshmerga, and US airpower are all needed for that. But the Iranian leadership is working to ensure the PMF becomes a new pillar of Iraqi security and politics.Once Mosul is retaken, Hadi al Amiri looks to make the militia groups a permanent government force, although one under Badr’s supervision, rather than the control of Iraq’s army or law enforcement. Tehran may even aspire to turn the PMF, at least the parts that can be considered true proxies, into an Iraqi-style IRGC or Lebanese Hezbollah, though Iran likely recognizes the size and diversity of Iraqi Shia groups makes creating a singular body like that quite difficult.

Iran is also encouraging the PMF “heroes” from the fight against ISIS to pursue political office. Many militia leaders are expected to run in the provincial elections next spring and to eventually play significant roles in the pan-Shia political blocs in Baghdad.

Iraq’s national-level politics, though, continue to be a huge headache for Tehran. Reform protests by Sadr’s followers (complete with two stormings of the Green Zone), deep internal fractures within the Sunni, Kurdish, and Shia blocs, and a practically absentee parliament have brought governance in Baghdad to a virtual standstill in 2016. Iranian leaders have had to intervene to help resolve, or at least deescalate, these crises at a regular clip. The reform protests, which were developing an anti-Iranian tone, died down after Sadr was called back to Tehran for talks with the leadership and his funding possibly threatened. In August 2016, and Iranian delegation flew in to mediate a growing rift within the Patriotic Union of Kurdistan (PUK), the Kurdish political party most closely aligned with Tehran.

Subsequently, after meeting with Iranian Supreme Leader Ayatollah Ali Khamenei in early September, the parties of the National Alliance (the pan-Shia bloc that holds a majority of the seats in parliament) suddenly resolved longstanding disputes and elected Islamic Supreme Council of Iraq (ISCI) party head Ammar al Hakim as their new collective leader for a one-year term. Iran created what is now ISCI by coordinating with Iraqi Shia exiles in the 1980s, and it represents the Islamic Republic’s most familiar and trusted Iraqi political partner.Although Hakim’s presidency will likely last only through the next election cycle, ISCI’s return to a potential position of strength is undoubtedly reassuring to Tehran after years of escalating Shia tensions between the more powerful Sadrist and Dawa parties, the latter of which is itself deeply divided between the faction led by former Prime Minister Nouri al Maliki and that led by current Prime Minister Haider al Abadi.

Since 2003, Iran’s leadership has always tried to prevent Iraq from becoming either too strong and independent or too weak and chaotic.Tehran will continue trying to make Iraq a vehicle to project its regional power and deter the United States, its allies, or Sunni extremist forces. Some of the byproducts of Iran’s recent interventions, such as the PMF and the newly brokered political deals, may form the basis of a more secure anchoring of Iraq within the Islamic Republic’s sphere, or they may prove to be inadequate yet again.  These are not unfamiliar lessons for Tehran, especially after five and half years of inconclusive escalation in Syria.

The Islamic Republic has likely recognized it may indeed be hitting the upper limits in how much it can control and shape Iraq, never mind Syria, Lebanon, Yemen or Afghanistan for that matter. Iran’s achievements in Baghdad, though, may be enough for its political and security agendas. But the continuing resistance and challenges show there remains significant room -- and desire – for Iraqis to chart a course independent of Tehran. Those are aspirations the United States should champion, or at least not discourage.