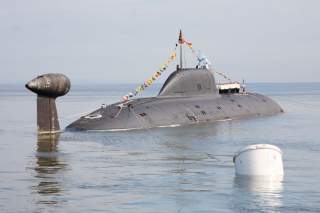 The most daunting threats to the United States Navy and the NATO alliance fleet in Europe comes from Russia’s powerful submarine force and its new anti-access/area-denial (A2/AD) bastions in Kaliningrad and beyond. These tools are part of an overall Russian strategy to prevent U.S. and NATO intervention in Eastern Europe should tensions ever escalate into all-out war.

“The Russians are building a number of stealthy hybrid diesel-electric submarines and deploying them around the theatre,” Vice Adm. James G. Foggo III, who is simultaneously commander of the U.S. Navy’s 6th Fleet, Joint Force Maritime Component Commander Europe and NATO’s Naval Striking and Support Forces NATO, told The National Interest. These submarines are a component of the over Russian A2/AD strategy. “A2/AD bubbles also include stealthy submarines,” Foggo said.

Alarik Fritz, a senior analyst with the Center for Naval Analyses who serves as Foggo’s advisor, said that Russian submarines are some of the most dangerous threats the U.S. Navy faces anywhere on Earth. “The submarine force that they have is essentially their capital ships,” Fitz said. “They’re a concern for us and they’re highly capable—and they’re a very agile tool of the Russian military.”

The Kremlin has invested huge sums into modernizing its undersea fleet to challenge the U.S. Navy and NATO in the North Atlantic. And in many respects, the Russian Navy has caught up to Western capabilities. One Russian design that has caught the U.S. Navy’s attention is the Project 885 Yasen-class submarine, the first of which—Severodvinsk—is already in operational service. “It’s a very impressive submarine,” Foggo said. “If you look across the design of the Russian Federation Navy, where they have put their resources and their research and development efforts has primarily been in the undersea domain and in the submarine force.”

To retain its lead, the United States must push the technological edge in submarine development and craft advanced anti-submarine warfare capabilities if it is to prevent Russia from gaining an advantage. “We can’t allow that to happen, so we need to continue R&D and we need to continue to make our ships quiet and capable and technologically superior,” Foggo said. Fitz agreed: “If we want to continue to deter them, we have to meet those challenges.”

But U.S. Navy and NATO can’t just focus on submarine-versus-submarine combat; the West has to take a holistic approach to dealing with the resurgent Russian fleet. That holistic approach has to include submarines, surface ships and aircraft. “Finding another submarine with a submarine can be difficult—can be like a needle in a haystack,” Foggo said. “You need other resources to help—and those are marine patrol aircraft.”

Foggo extolled the virtues of the Boeing P-8 Poseidon anti-submarine maritime patrol aircraft. The P-8—which Foggo said is unmatched in its capabilities—will be a vital component of the U.S. and NATO response to the Russian submarine activity. The key capability the P-8 brings is the ability to cover vast areas and pinpoint Russian submarine activity so that other assets can take care of the threat. “We should have P-8s here in this theater by the end of the year,” Foggo said. “I’ve been in a P-8, it is just superb.”

The surface navy, too, has a role to play in hunting Russian submarines. While surface ships have traditionally been at a disadvantage fighting against submarines, new technological developments have changed the nature of anti-submarine warfare (ASW). Foggo said that new multifunction—and highly capable—towed-array sonars allow destroyer like the Arleigh Burke-class to become excellent submarine hunting assets. “We’re very fortunate here in Europe to have four forward deployed Burke-class DDGs—multimission ships—in Rota, Spain, that perform a variety of missions throughout the theatre, one of which is ASW,” Foggo said. “We have to continue to train and hone our ASW skills so that we can be better than any potential adversary.”

But it’s not just submarines—Russia has developed “bubbles” of anti-access/area-denial capabilities that make it difficult for the U.S. and allied forces to operate. These zones include the Baltic—where the Russian exclave of Kaliningrad has become heavily fortified bastion—Crimea in the Black Sea, and another zone in the East Mediterranean around the Syrian cities of Tartus and Latakia.

While Russia frames their deployment of advanced surface-to-air, anti-ship and surface-to-surface weapons as defensive, Fritz said that Moscow could—and often does—use those forces offensively.  “The air control capability that Putin’s A2/AD systems afford him, could easily be used to threaten the airspace of all the Baltics,” Fritz said. “That gets at the very issues of NATO security and sovereignty over those countries. So we need to keep in mind that it’s an offensive as well as defensive capability.”

In Kaliningrad and Crimea, for example, Russia has setup coastal radars which could be used to cue K-300P Bastion-P shore-based mobile anti-ship missile batteries that can launch Mach 2.5+ supersonic sea-skimming P-800 Oniks missiles at targets as far as 300 kilometers (186 miles) away. “An A2/AD capability and strategy is asymmetric, but that I mean it’s fairly simple,” Foggo said. “You have coastal defense radars and the ability to target shipping with those radars using—you could have inexpensive anti-ship cruise missiles that are available on the open arms market or you could have very sophisticated systems like the Russians use called the Bastion system.”

While advanced surface-to-air missiles like the S-400 defend the air and powerful anti-ship weapons like the Bastion attempt to keep the U.S. Navy and NATO at bay, the Russians are also deploying advanced sea mines. Indeed, mines have sunk or damaged more U.S. Navy warships since the end of the Second World War than any other kind of weapon. “Additionally, one should not discount mines or unmanned underwater vehicles or smart mines, which are easy, covert to sow and limit access to an area,” Foggo said.

Indeed, NATO forces—operating under Foggo’s command—recently practiced countering an anti-access/area denial threat during the BALTOPS 2016 exercise. The first step is to establish air and maritime superiority—using fighters, ships and submarines. While Foggo would not discuss the tactics or techniques the Navy would use, aircraft carriers and naval aviation play a significant role in countering the Russian A2/AD bubbles. Closer in—to counter the threat of sea mines—the NATO fleet deployed mine counter-measures ships to clear the seas before the Marines went ashore. “Obviously, there couldn’t be any mines if we want to put Marines ashore,” Foggo said. “That also required air superiority overhead.”

Meanwhile, the U.S. Navy and NATO continue to operate in zones defended by Russian A2/AD capabilities—including the Baltics, Syria and near Crimea in the Black Sea. “These are all areas that we continue to conduct both NATO—with the United States as part of NATO, one of the 28—and on occasion U.S. Navy unilateral operations or bilateral operations with allies in all those waters to exert our ability to conduct freedom of navigation despite the A2/AD threat,” Foggo said.

Both Foggo and Fritz were careful to state that NATO and the United States are at peace with Russia. While NATO and the United States have to deter Russian forces, the current situation is not a revival of the Cold War—and the West does not face an existential threat from Moscow. “This isn’t the Cold War,” Fritz said. “We have an interest in integrating Russia into the European order. It’s a balance not a war.”