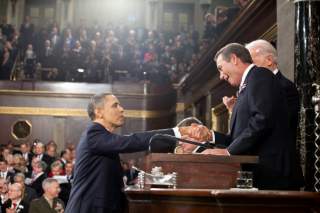 Depending upon who you speak to, both partisanship and bipartisanship can be dirty words in U.S. politics, including when it comes to foreign policy.  In a way, it is appropriate—not to mention quintessentially American—that there is such dissensus over whether a bipartisan foreign policy is necessary or even desirable.

Perhaps the real question, though, is whether the presidency and the Congress ought to agree on foreign policy, for it is these two organs of government—each allocated by the constitution certain powers over foreign policy—through which the political parties exercise their influence.  It is only in the context of political relations within and between the presidency and Congress that partisanship and bipartisanship become operative concepts.

Realist scholars of international relations from George Kennan to Henry Kissinger to Stephen Krasner have long argued that Congress is ill-suited to foreign policy-making.  Individual congressmen are responsible to narrow constituencies of electors, perennially up for re-election and thus hopelessly short-sighted.  Against the wishes of the Framers of the Constitution, the Seventeenth Amendment ensures that the Senate is little better than the House: members of both chambers often seem more interested in their own careers than in defending truly national interests.  Why allow the partisan muckrakers in Congress a say in foreign policy when their branch of government is so badly designed for it?

Instead, realists tend to believe that foreign policy should be the preserve of the president.  As a unitary actor, the presidency does not have to compromise with itself as does Congress.  Moreover, presidents are dependent upon achieving a decisive hunk of the national electorate, not a paltry slice of it; they thus have incentives to cater to the nation at large in words and in deeds.  At least in theory, the office of president carries with it the legitimacy to remain aloof from short-term partisan bickering.  Given that he (one day she) symbolizes and embodies the entire nation, surely the president should be allowed to conduct foreign policy as he sees fit?

Seen from this perspective, bipartisanship means a dilution of the national interest and the triumph of politics over hard-headed calculations.  In fact, though, broad consensus between the presidency and the Congress—or, more accurately, the two parties controlling these institutions—is extremely important for U.S. foreign policy.  As Charles Kupchan and Peter Trubowitz reminded readers of Foreign Affairs in 2007, the issue at stake is (in Walter Lippman’s words) one of “political solvency.”  That is, the nation’s ambitions on the international stage must tally with the stomach of its political representatives.  When foreign policy is solvent—when goals and objectives do not exceed domestic appetite—then presidents can rely upon the political foundations necessary to carrying out the business of promoting the national interest.  When foreign policy is insolvent—when chief executives try to punch above or below the weight expected of them by domestic actors—then presidents will find themselves constantly looking over their shoulders, hamstrung in undertaking international diplomacy.

Today, President Obama’s foreign policy looks politically insolvent.  Some Republican law-makers criticize the president’s agenda of downsizing the military’s overseas footprint while others from both sides of the aisle argue for greater economies in defense spending.  Just in the last few weeks, divisions have emerged over the appropriate tools with which the United States should fight insurgents in Iraq.  More broadly still, it is unsettled whether the Greater Middle East (Afghanistan, Iraq, Syria), East Asia (the East and South China Seas) and Eastern Europe (Ukraine) constitute core areas of strategic concern.

Interestingly, the general public often is more united when it comes to foreign policy.  Partisan differences are evident in public opinion polls, but they are modest.  The problem is that Congress and the political parties that control it are much more able to torpedo Obama’s foreign policy agenda than “the people” are able to buoy it.  Even withstanding the presidency’s considerable powers over foreign policy, Congress constitutes a formidable backseat driver.  It is therefore Congress that needs to be assuaged if the nation’s external relations are to be placed on a sound footing.  And in an era where no party reliably can command a permanent majority in either chamber, this must mean bipartisanship.

Vigorous debate over foreign policy is essential in a democracy.  But a stable and practicable foreign policy is also to be valued.  For better or worse, and despite the well-worn obstacles to its realization, bipartisanship still offers the best route to this outcome.  It might be too late for President Obama, but his successors should take note.