Bombs Away: Russian Air Strikes Reveal Bankruptcy of US Policy in Syria 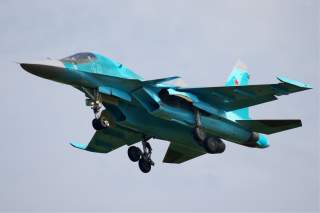 Just what Syria needed—another military actor on the battlefield.

Russia launched the first round of air strikes by hitting eight targets in the northern countryside of Homs and Hama which it claimed were ISIS locations, just hours after President Vladimir Putin's request to use military force was approved by the Russian parliament. The Russian claim was immediately thrown into doubt. The areas around Homs and Hama are not ISIS hotspots. In fact they are known as a bastion for the U.S.-backed moderate rebel forces and an important strategic gateway to Assad's Alawite coastal heartland.

Within an hour of the strikes occurring, the leader of the Western-backed anti-Assad opposition group on the ground claimed the strikes had killed at least 36 civilians.

US Secretary of Defense Ash Carter told reporters in Washington that the strikes occurred “where there probably were not ISIS forces.” He said the move was effectively “throwing gasoline on the fire” in Syria and that without efforts to replace Assad, it could “inflame the civil war in Syria.” The Wall Street Journal reported U.S. officials as saying that the targets had in fact been rebel forces backed by the Central Intelligence Agency.

The strikes could lend credence to claims by Syria's opposition that, after promising for years to support the rebel cause, the U.S. has abandoned them to effectively side with Iran and Russia and preserve Assad's power. This could push more rebels to embrace ISIS, the al-Nusra Front and their allies as the only forces genuinely engaged in battle against Assad's forces.

With the U.S. already conducting strikes in Syrian airspace, Russia's involvement also opens up the possibility of a military incident between American and Russian warplanes.

Russia's initiative will undoubtedly buoy Assad ahead of any renewed diplomatic initiative and negotiated political transition. The US has consistently said that Assad cannot have any future role in Syria. But with the emergence of ISIS as a priority for the U.S., there have been signs that Washington may be more willing to capitulate on Assad's role in any future transition. Despite repeated condemnations of Assad, the Obama Administration has made clear it will not do very much to dislodge him. Washington's half-hearted and ill conceived US$500 million program to build a moderate rebel force of 5000 fighters is collapsing; just 54 vetted rebels graduated the program, only for their equipment to be taken by al Qaeda upon arriving in Syria. Russia's military presence will also most certainly serve as leverage in any transition discussion.

Unfortunately, all of these possibilities would just add another chapter to the horror in Syria, which is snowballing into the greatest humanitarian crisis since World War II.

The most immediate consequence of Russia's actions can be found in the timing of the move, which exposed the bankruptcy of American policy on Syria in the most deliberately brazen and embarrassing way possible.

Just hours after the strikes began, U.S. Secretary of State John Kerry appeared in what can only be described as a bizarre joint press conference in New York for the closing day of the UN General Assembly session, where the two superpowers have signaled a confluence of interest in destroying ISIS but traded potshots over who is to blame for its rise.

Kerry said the U.S. would have “grave concerns” if Russia strikes “areas where ISIL and al Qaeda-affiliated targets are not operating...Strikes of that kind would question Russia's real intentions fighting ISIL or protecting the Assad regime.” To strike the U.S.-backed rebels as talks were continuing in New York is defiant, to say the least. Yet there was Kerry, still saying he was willing to work with Russia on “deconfliction” in Syria and warning against escalation.

As the U.S. continues it's diplomatic rhetoric, Russia is not even pretending to hide its real intentions. More than at any other time in the conflict, Washington's tentative Syria policy calls to mind the fable of the emperor with no clothes. Russia, meanwhile, is holding all the cards.