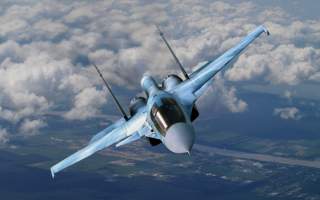 The Russian air force in Syria seems to be generating close to the theoretical maximum number of sorties possible for thirty-two fixed-wing combat aircraft. That’s of course assuming the Russians are providing factually accurate information about their operations in Latakia.

While there might be some dispute over whether the Russians are hitting ISIS targets versus other Syrian rebel groups opposed to the Assad regime, if the sortie generation number is accurate—it is an extremely impressive feat. That would put the Vozdushno-KosmicheskieSily Rossii on par with the U.S. Air Force and U.S. Navy in terms of turning aircraft. But while the Russian forces might be able to surge their sortie generation rate up to eighty-eight per day, it remains to be seen if they can maintain that pace for long.

The most optimistic U.S. military officials had predicted that the Russian forces would be able to generate a theoretical maximum of ninety-six sorties per day—but most officials dismissed that as wildly optimistic. “With thirty-two on the ramp, I think they'll probably be able to fly twenty-four jets per day,” one recently retired U.S. Air Force fighter pilot told me. “Depending on sortie duration and whether they're flying at night, they may get between two and four sorties per jet, per day. So I think the range is probably between forty-eight and ninety-six sorties per day.”

But several U.S. Air Force, Navy and Marine Corps official had noted that Russian jets are extremely “rugged” and could be surprisingly reliable—especially since Soviet aircraft often have a lot of common parts. “They have more interoperability between their planes and they were designed to be easy to work on,” another Air Force official had said.

As with their surprise Caspian Sea cruise missile raid from last week —which was launched from tiny corvettes and a small frigate—Russian forces continue to demonstrate a level of capability that seems to have caught some off guard. Eighty-eight sorties per day is not far off from the maximum theoretical predicted number of ninety-six per day. This seems to demonstrate that the Russian forces have recovered from their near complete implosion in the mid-1990s in the immediate aftermath of the Soviet collapse. Certainly, it demonstrates that the Russian forces in Syria are well trained and well supplied. But the question remains—how long can they keep it up?