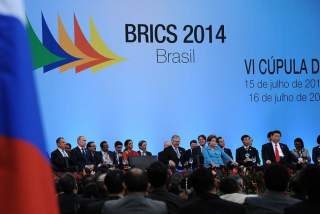 This week’s BRICS summit in Brazil largely has been overshadowed by the violent exchanges between Israel and Hamas, yet the summit’s keynote announcement has managed to make headlines: the agreement to create a global financial institution to rival the IMF and World Bank. Upon inspection, however, even this highly conspicuous and grandiose diplomatic move probably will mean less than its architects intend.

The deal signed in Fortaleza by the leaders of Brazil, Russia, India, China and South Africa was to create an international fund (rumored to be titled the New Development Bank) capable of issuing major infrastructure loans to developing countries.  Such an institution, of course, would be in direct competition with the World Bank (as well as regional institutions like the U.S. and Japanese-led Asian Development Bank and China’s Asia Infrastructure Investment Bank).

Reports also suggest that the new bank will engage in financial bailouts, with a $100bn fund being put at its disposal in order to insulate the BRICS—and any other countries which may choose to join the new financial institution—from reliance upon the IMF in times of crisis.  All of this has led some to suggest that the BRICS are seeking to replace the western-centered international financial system.

At face value, the creation of a “BRICS bank” does indeed appear like a serious challenge to the U.S.-led order.  But there are several reasons for skepticism.  First, organizations set up to rival western-led international institutions have a history of failing to meet expectations (or even materializing).  In Latin America, the so-called Bank of the South was created in 2009 (at the chief behest of Venezuela) for similar reasons to those touted in Fortaleza this week: to free developing economies from reliance upon the IMF and, by extension, the United States.  Yet five years later that institution only exists on paper.

Even attempts to rival the west spearheaded by the BRICS themselves have left much to be desired.  Russia’s much vaunted Eurasian Economic Union, for example, which is set to come into being in January 2015, took around 20 years to get off the ground.  Even so, analysts doubt whether the Union—argued to be more a political move than a serious plan to integrate national economies—will have much of an impact.  In the security realm, too, the Shanghai Cooperation Organization, which includes both Russia and China, has failed to grow into a real counterweight any western-led security organization or alliance.

Second, the BRICS bank will be hamstrung by its relatively small initial capitalization ($50bn) and the fact, as Daniel Drezner points out, the bank will be limited to expanding in size only so far as its weakest link (South Africa) can afford because of the BRICS countries’ preoccupation with equality (in this case, in terms of making contributions to the fund) and consensual decision-making.

This latter point leads to a third and final reason to doubt the durability of BRICS efforts to undermine the international status quo.  Although they are united by a common desire to hasten the general trend in world politics towards greater multipolarity, the BRICS actually have relatively few specific interests in common.  In important areas, the BRICS are actually at odds with one another on the world stage; a common vision of what should replace the U.S.-led international system certainly is lacking.  Movement beyond this week’s bombastic announcement, then, is destined to be slow and piecemeal—at best.

Together, the BRICS do have the potential to rival the United States and its allies in world politics and economics—mostly, it has to be said, because of China’s immense economic power.  But the BRICS rarely do work together.  While this week’s announcement is of real symbolic value, and may prove to be a meaningful bargaining chip vis-à-vis negotiations over the future of the IMF and World Bank, a BRICS-centered world order is not yet in sight.