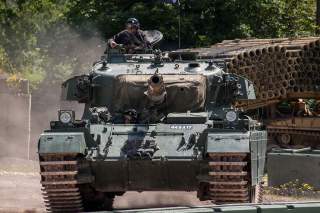 When someone mentions a list of the best tanks in history, the names are always the same: Tiger, T-34, M-1 Abrams. And always from the same nations: Germany, Russia, America.

But great tanks from Great Britain? Though the British were the ones to develop armored fighting vehicles in World War I, British tanks of the Second World War can generally be described in one word: awful.

There were tanks that could barely move without breaking down. Tanks that were fast but too thinly armored, or heavily armored but too slow. Tanks with radios that didn’t work. Tanks with guns that could shoot armor-piercing shells at other tanks, but not high-explosive rounds at infantry and antitank guns.

The British had some successes here and there: the heavy Matildas that tore through lighter Italian armor in 1940, the Crocodile flamethrower tanks whose very presence terrified German troops into surrendering, or the “Funny” engineering tanks that proved invaluable at D-Day. But on the whole, British tanks like the Crusader proved a disappointment.

There were reasons behind the failure. British railroads were too narrow to transport big vehicles the size of the German Tiger. British tactics were faulty, favoring gallant charges by tanks acting without infantry or artillery support. The British tank corps of World War II was schizophrenic, caught between those who wanted fast, light cruiser tanks that were essentially cavalry horses on treads, and those who wanted heavy, slow infantry tanks to help the foot soldiers breach enemy trenches. In the end, many British units were equipped with Lend-Lease American Shermans, a mediocre vehicle that at least was reliable.

British armor had been roughly handled in North Africa, yet the Normandy campaign in the summer of 1944 was the real nightmare. British and American crews dreaded coming to grips with the heavily armored German Panthers and Tigers, whose powerful cannons inflicted huge losses on Allied armor.

And then in 1945, the British got it right. The Centurion may have been the best tank overall during the 1950s and 1960s. Though fielded just a few months after World War II ended, the Centurion proved such a good design that it is still in service today with the Israeli and other armies.

The Centurion began life in 1943 as a proposed cruiser tank, but one that incorporated the harsh lessons of World War II. It had to be reliable, have good armor and mount a high-velocity cannon. It didn’t have to be the fastest tank, but it did need good cross-country mobility. And, because British railways couldn’t accommodate large vehicles, it couldn’t be more than ten feet eight inches wide.

The Centurion Mk 2 that went into production in November 1945 actually weighed in at forty-five tons, quite a bit lighter than the sixty-eight-ton German King Tiger it was supposed to take down. The Mk 2 mounted a seventy-seven-millimeter cannon (that had proven capable of knocking out thickly armored German tanks in Northwestern Europe), and a V-12 engine with a six-hundred-horsepower V-12 engine.

But it was with the Mk 5 model that the Centurion made its name. The Mk 5 featured the legendary British L-7 105-millimeter cannon, probably the best tank gun of the Cold War.

The Centurion was a better tank than its contemporaries, the American M-48 Patton and Soviet T-54 and T-55. The Patton was faster, had a better combat fuel range, and was more maneuverable, with a maximum speed of thirty miles per hour versus twenty-two for the Centurion. But the Centurion’s flat plate armor was tougher than the Patton’s cast armor, and its 105-millimeter gun was much better than the Patton’s ninety-millimeter gun (so much so that the Israelis replaced the ninety-millimeters on their Pattons with the L-7). The more compact T-55 made a smaller target that was more difficult to hit, but poor ergonomics hampered crew efficiency. The T-55’s low height made it more difficult for the vehicle to assume a “hull-down” position, where the hull of the tank is protected by a hill or embankment, with just the turret and gun peeking out.

The Centurion was a British tank, but it earned its laurels fighting in other nation’s armies. It was used by some nineteen nations, including Australia, Canada, Denmark, Jordan, Sweden and Switzerland.

Two armies used the Centurion with particular effect. In the 1965 India-Pakistan War, Indian Centurions faced Pakistani M-48 Pattons. At a cost of just twenty-nine tanks, India destroyed 144 Pakistani tanks, including numerous Pattons. So many tanks were destroyed at the Battle of Khem Karan that the site was known as the “graveyard of the Pattons.”

However, who really made the Centurion famous was the Israeli army, which received them in the 1960s (before Britain imposed an arms embargo after the 1967 war). The Israel Defense Force adored its Centurions, “whose firepower and armor protection were greatly admired and appreciated,” writes author Simon Dunstan in Centurion vs T-55: Yom Kippur War 1973. “Many parents of sons entering the IAC [Israeli Armored Corps] demanded that they be assigned to Centurion units, as it was believed that they would have a greater chance of survival in battle.”

As is the Israeli habit, they customized their imported weapons to suit IDF needs, turning the Centurion into the Sho’t (“whip”). While Israeli Pattons got Centurion guns, Israeli Centurions had their gasoline-powered Meteor engines replaced with the Patton’s diesel-powered engines, which used less fuel and were less prone to catching on fire in combat.

The Centurion saw action in the 1967 war, but it was the 1973 October War that they achieved lasting fame. While Israel’s M-48 Pattons were sent to duel with the Egyptians in the vast expanses of the Sinai desert, the Centurions were sent to fight the Syrians in close-range combat among the hills and rocks of the Golan Heights.

The two Israeli armored brigades in the path of the initial Syrian surprise offensive were badly outnumbered. Stories are legion of what the Centurion crews performed, the most famous being that of Zvika Greengold, the Israeli tank commander whose Centurion single-handedly knocked out as many as forty Syrian tanks. (To view lots of video of Centurions in action, see Kippur, the 2000 Israeli drama of the 1973 October War, which features actual Israeli Centurions driven by reservists.)

At one point, Jordan half-heartedly entered the war, sending a brigade of its Centurions to fight a desultory engagement with Centurion-equipped Israeli Centurions, which captured forty-four Jordanian vehicles.

The Americans moved from the Patton to the M-1 Abrams, the Soviets to the T-72 and even the Israelis developed the Merkava. But still the slow, steady Centurion clanked on through the 1990s in the Israeli army, appropriately upgraded with better fire-control systems and reactive armor to detonate antitank rounds.

Even now, the Centurion lives on. The Israelis removed the turret from the Sho’t and turned the tank’s hull into the Nagmachon armored personnel carrier. Because if infantry go into battle, why not give the armored protection of a tank? The Puma is a Sho’t converted into an armored combat engineer vehicle.

Not bad for a seventy-year-old tank.