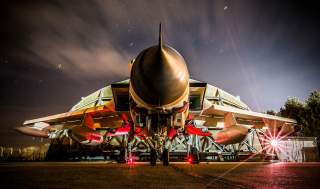 In December 2016, British Prime Minister Theresa May ruffled Iran’s feathers. At a summit of the six Gulf Cooperation Council member states earlier this month, she announced Britain’s desire to “make a more permanent and more enduring commitment to the long-term security of the Gulf.”

This would consist of a £3 billion investment — $3.7 billion in U.S. dollars — in the defense spending of the region over the course of the next decade, she said.

The British prime minister went on to add that she was “clear-eyed” about the Iranian threat to the region and vowed to counter what she called Iran’s “aggressive regional actions.”

This was music to the ears of most of the Gulf Cooperation Council, a regional political and economic bloc that comprises Saudi Arabia, the United Arab Emirates, Kuwait, Bahrain, Oman and Qatar. Officials in Tehran bitterly denounced the statements as an aggressive stance on the part of their counterparts in London.

Britain’s stated desire to become a force in the Gulf in cooperation with the region’s Arab monarchies is nothing new. In recent years, the United Kingdom has signaled it was working to reverse its east of Suez pullback.

Dating to the early 1970s, that policy came about after a series of military cutbacks. The British military could no longer afford to maintain a large force in the region.

Fast forward to 2016 and Britain’s military is in a state of decline, the Royal Navy is a shadow of its former self, as is the Royal Air Force. Nevertheless, Britain continues to profit handsomely from its sale of arms to these regional powers.

Despite the declining strength of its military, the United Kingdom has shown tangible signs of reestablishing a noticeable military presence in the Persian Gulf region. In September 2014, officials in London voiced their intention to establish three new bases in the Gulf, ostensibly just to fight Islamic State.

Before that, there were clear signs that the British military was diverting a substantial amount of forces to the region. The RAF has sent both Panavia Tornado and Eurofighter Typhoon fighter jets to Al Minhad air base south of Dubai in the United Arab Emirates.

In addition, the British government sought to develop its presence in Oman’sDuqm port and bolster its naval presence in the tiny island kingdom of Bahrain. In December 2016, the U.K. Ministry of Defense revealed that RAF aircraft dropped eleven times more bombs in the campaign against Islamic State than at the height of the conflict in Afghanistan.

Since the Royal Navy doesn’t have any aircraft carriers left in operation — at least until its Queen Elizabeth-class carriers become operational in the 2020s — the United Kingdom depends heavily on these regional bases. Aside from bases in Cyprus, the British military has largely turned to the Gulf states.

Beyond terrorists like Islamic State, the bases give the United Kingdom a platform to respond to any provocations from Iran. Long before the ascent of the present regime in 1979, officials in Tehran considered the Persian Gulf their own backyard.

The Iranians deplored the presence of foreign military powers in the waterway. When Britain pulled back east of Suez, it dismissed the Shah of Iran’s goal to be the predominant military force in that region.

The United Kingdom had to “disabuse the Shah of the idea that, if and when we ever leave the Persian Gulf, Iran can take our place,” Britain’s Foreign Secretary Michael Stewart advised Prime Minister Harold Wilson in March 1965. “Given the Arab character of the southern shores of the Persian Gulf, and the pretensions of Saudi Arabia and Iraq — to say nothing of the United Arab Republic — this hope is quite illusory.”

In a study of U.S. relations with Iran during the Nixon-Kissinger period, historian Roham Alvandi noted that Britain’s close economic and political ties with the Arab monarchies had shaped Britain’s policy in containing Iran’s ambitions in that region. “British policy was to contain Iran’s ambitions and to reassure their Arab clients,” Alvandi wrote in Nixon, Kissinger, and the Shah.

“Sir Stewart Crawford, the British resident in the Gulf, advised Foreign Secretary George Brown that Britain should avoid any appearance of endorsing Iran’s ambitions, thereby giving the impression that ‘we shall disregard the interests of the [Arab] Gulf States and sell them down the river’,” he added.

When Britain finally withdrew from the Arabian Peninsula, the seven Trucial States — a loose collective of sheikdoms the British had once derisively dubbed the “pirate coast” — joined together to form the UAE. Tensions with Iran immediately emerged.

The Shah had renounced his country’s claim to Bahrain, but immediately seized the three islands of Abu Musa and the Greater and Lesser Tunbs in the Persian Gulf. In 1921, the British had previously taken control of these islands, before eventually turning them over to the administration of the Emirate of Sharjah.

The Shah was not content with the newly formed UAE taking ownership over them. Dispute over rightful ownership of these islands persists between the governments in Abu Dhabi and Tehran to the present day.

Despite their historic links to the newly renamed UAE, the Shah was the big military spender in the Gulf region. So, Britain lavished his army with over 700 of its then top-of-the-line tank — the Chieftain — and supplied his navy with fourSaam-class frigates — later renamed the Alvand-class after the revolution.

With these weapons, Iran dominated the warm waters of the Gulf. And the United Kingdom was second only to the United States when it came to furnishing Tehran with high-tech weaponry.

After the 1979 Islamic Revolution in Iran, the balance of both U.S. and U.K. military spending shifted from Tehran to Riyadh and the other Gulf Cooperation Council states. Since the 1980s, the United States has supplied Riyadh with more than 100 F-15 Eagle jets, including a derivative of the advanced F-15E Strike Eagle variant.

In 2016, the U.S. State Department approved the sale of a staggering 72 Eagles to tiny Qatar. Britain’s BAE Systems has been working on supplying a comparable number of Eurofighters to the Saudi kingdom.

These monarchies are spending amounts on advanced western weaponry that have far exceeded the Shah’s manic build-up 40 years ago. The buildup has presented a clear challenge to Tehran’s long-term goal of being the hegemon of the Gulf.

Given May’s December 2016 comments, the United Kingdom looks set to continue its support for the Arab monarchies and maybe even send more of its own troops to the region once again.

This article originally appeared in War is Boring