Britain's Typhoon Fighters Will Be Getting Deadly New Missiles 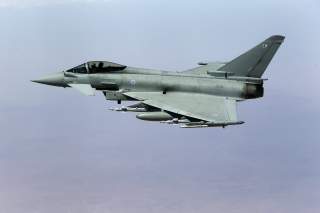 Called Project Centurion, the program is part of an effort to boost the Typhoon’s capabilities as the RAF prepares to retire the long-serving Panavia Tornado GR4 bomber. Phase 1 of the Centurion project—which is currently being evaluated—will add the ability to carry MBDA Meteor beyond visual range air-to-air missile and Storm Shadow long-range cruise missile to the Typhoon’s arsenal. The modernization effort also includes a host of RAF-only pilot-vehicle interface improvements to the Typhoon.

"Planned testing and evaluation by 41(R) Squadron is now well underway,” James Glazebrook, head of U.K. Centurion and Eurofighter Capability Programs at BAE Systems Military Air and Information, said in a statement. “This is another important milestone on the Project Centurion program and has been achieved through hard work and excellent collaboration between our teams and the Royal Air Force.”

Thus far, the RAF has modified six Typhoons with the help of BAE Systems for the purposes of operational testing. Once the operational testers have put the jets through their paces—and any deficiencies are corrected, the upgrade will be fielded to the rest of the RAF’s Typhoon fleet.

“BAE Systems will continue to increase the capability of the Phase 1 package ahead of scheduled customer firings of the Meteor and Storm Shadow weapons,” the company said. “This will lead to eventual entry into service of the upgrades, scheduled for early 2018. The next and final stage of Project Centurion includes the integration of the Brimstone high precision, low collateral air-to-surface missile on to the aircraft.”

The addition of the Meteor—perhaps the most capable air intercept missile developed by the West—will afford the RAF an enormous boost air-to-air capability. Pilots are thrilled at the prospect of having a weapon like the Meteor at their disposal.

“It’s just a more efficient method of propulsion,” Wing Commander Chris Hoyle, commanding officer of the RAF’s 1(Fighter) Squadron told me during Exercise Atlantic Trident 17 at Joint Base Langley Eustis in Virginia earlier this year. “It’s a slightly slower missile than a pure rocket that’s just going to have a certain burn period, accelerate very fast and then coast. It’s very clever, it’s able to use all of its energy in the most efficient manner based on the range you’re asking it to move forward, so it’s a fantastic weapon.”

The Meteor—combined with a new active electronically scanned array radar—should help to keep the Typhoon relevant as an air superiority fighter for years to come.