Calm in the East China Sea?: What to Make of Shinzo Abe and Xi Jinping's Recent Meeting 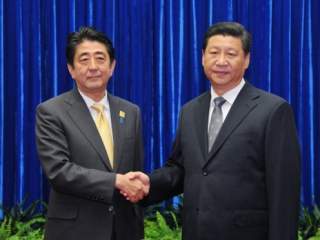 Despite the hype, widespread media reports calling Beijing’s and Tokyo’s simultaneous November 7 declarations on “improving Japan-China relations” a “joint statement” are inaccurate. Calling them a “breakthrough” is, at best, premature. Together with the brief and chilly summit meeting between Chinese president Xi Jinping and Japanese prime minister Abe Shinzo in Beijing this past Monday, the developments of the past week constitute only a tentative first step toward a possible, and explicitly “gradual,” return to normalcy in relations between the world’s second- and third-largest economies. Indeed, Xi’s reportedly cold reception of Abe during the APEC 2014 meeting in Beijing makes clear that political relations, even if no longer frozen, remain on ice.

Much work must be done to achieve a desperately needed, but politically difficult, sustainable thaw. With Sino-Japanese relations arguably having reached a postwar nadir the past two years, in large part because of disputes over history and what each side sees as the other’s provocative behavior vis-à-vis contested islands in the East China Sea, the continued peace and growing prosperity of East Asia depends on proactive leadership and statesmen determined to guarantee it.

As far as the prospects for this, despite much with which to be pleased, the past week’s developments, coupled with the lessons of recent history, are sobering. For starters, a point-by-point comparative analysis of the statements released by China (Chinese /English) and Japan (Japanese/English) in Chinese, Japanese and English leaves significant grounds for skepticism about the prospects for a fundamental, long-term, sustainable break through the unfortunate impasse that has plagued Sino-Japanese relations. Despite clever diplomatic wordplay and politically expedient spin—especially in Beijing—no four-point agreement, much less an alleged “principled consensus,” has been reached. Rather, each government effectively released its own separate statement. Analyses based exclusively on one side’s statement are incomplete, if not misleading.

Read the Lines, and Between Them

While the spirit of Beijing’s and Tokyo’s simultaneous declarations may convey consensus, their letter does not. Despite some important (and positive) overlap in substance, last Friday’s statements remain more significant for what went unsaid. Subtle, but major, differences in wording make clear that the most contentious issues in Sino-Japanese relations persist.

For starters, and contrary to earlier, ambiguously sourced reports suggesting that Tokyo would acknowledge the existence of a sovereignty dispute over the Senkaku (Diaoyu in Chinese) Islands in the East China Sea in exchange for a bilateral summit, Abe did not “cave” in to pressure from Xi. Contrary to reports on last Friday’s agreement from major global news publications, including theNew York Times and the Associated Press, the two sides did not simply “agree to disagree,” nor did Tokyo “acknowledge differing views over the status of the islands” in a “concession likely to please Beijing.” Since Abe also made no explicit vow to refrain from again visiting the controversial Yasukuni Shrine as prime minister, Tokyo appears to have not met either of Beijing’s repeatedly stated preconditions for a resumption of normalized, high-level political dialogue. Accordingly, claims of a major concession from Tokyo or, conversely, a major diplomatic coup for Beijing, are significantly off the mark. For its part, Beijing made no commitment to reduce, much less cease, what Tokyo sees as provocative and dangerous maneuvers of Chinese vessels and planes into waters and airspace around the contested islands. While the shared commitment expressed in the statements to improve crisis management is laudable, despite some reports to the contrary, this pledge remains rhetorical. The two sides have been talking about related measures for over a decade, with only limited fruit borne. One can only hope this time is different, as the ability of the two sides to effectively manage a crisis remains a major concern.

That no announcement of more substantive achievements was saved for Monday’s summit meeting is a sobering reminder that despite positive developments over the past week, the fundamental problems making the East China Sea one of the world’s most worrisome flashpoints remain unresolved.

A Ray of Hope?

To be sure, that a summit—however brief—occurred for the first time since both leaders took office roughly two years ago, and despite Abe’s unwillingness to meet Xi’s two major conditions, is certainly a positive sign. Dormant lines of high-level political communication are gradually reopening. Indeed, Tokyo and Beijing should be applauded for achieving a creative, diplomatic and (arguably) mutually face-saving first step out of a two-year-old impasse that has seen political relations reach a postwar nadir and international concerns about the risks of a Sino-Japanese military conflict climb to an unprecedented high. But last Friday’s “agreement” is no panacea—more a temporary expedient. Without sustained political will to keep the ball of progress rolling, its medium- and long-term benefits are in doubt.

Going forward, far more important than the specific text of any statement is how bilateral frictions will be managed in practice. Most pressing: Will high-level, regular bilateral political dialogue and summitry resume immediately or will such crucial exchanges continue to be held hostage by interpretations of history and domestic political conditions? Will Chinese ships and planes cease frequent encroachments into waters and airspace surrounding islands that—regardless of one’s view on the sovereignty question—have been under Tokyo’s effective control for decades? Have we seen the last news story from either side about a dangerous mid-air intercept or China’s “lighting up” of Japanese naval platforms with fire-control radar?

Perhaps most importantly, can the two sides find the political will necessary to immediately establish sustainable and effective mechanisms to ensure that any future incidents in the air or at sea do not escalate into a military conflict? Beijing’s agreement to reactivate talks—repeatedly requested by Tokyo—is an encouraging sign. But when it comes to crisis management in the East China Sea, talk is cheap. The proof will be in whether leaders introduce the political and institutional reforms necessary to actually implement effective crisis management. Particularly in Beijing’s case, as the Chinese saying goes, “saying is easy, doing is not so simple.”

The ice between Beijing and Tokyo has “melted” before, only to refreeze colder and harder. Indeed, recent developments recall the period of Abe’s previous stint as Japan’s prime minister—a one-year period during which he did not visit Yasukuni Shrine, but did make controversial comments about other historical issues, and during which China’s assertion of its claim to islands in the East China Sea, while troubling to Tokyo, was not seen as nearly as provocative as its behavior today.

In 2007, then Chinese premier Wen Jiabao visited Japan—and Abe—and addressed the Japanese Diet in a speech broadcast live in both countries. In a development widely seen as marking the dawn of a new era, Wen acknowledged Japan’s past apologies for its wartime behavior and expressed gratitude for Japan’s “support and assistance” in China’s reform and modernization. Then, as now, the Abe-Wen meeting was referred to as “ice-melting.” Then, as now, Abe referred to his meeting with a top Chinese leader as "a big step forward" toward fostering a "strategic relationship of mutual benefit.” Indeed, there was a great deal of optimism, to the extent that Japan’s chief cabinet secretary boldly declared “We’re not aware of any remaining ice.”

Yet the effect of these positive developments on the major irritants and dangers in bilateral relations proved abortive. A landmark agreement the following year to jointly explore oil and gas resources in the East China Sea is moribund. Repeated efforts to enhance maritime confidence and crisis management have borne limited fruit.

Although seemingly a net positive for bilateral relations today, by enabling an at least symbolically significant summit this week, over a longer time horizon, the disparate content of the different statements released by Tokyo and Beijing last Friday is worrisome. Indeed, less than twenty-four hours after the ink had dried on the November 7 statements, Chinese scholars at state-affiliated think tanks and official media claimed that Japan had formally acknowledged the existence of a sovereignty dispute over the islands. Yet even the text of Beijing’s own official statement makes no such a claim. Tokyo’s version does not even refer directly to the islands themselves, much less acknowledge a “dispute” of any kind—least of all over sovereignty—a stance since reiterated by Japanese Cabinet officials. This all leaves ground for serious concern that what appears to be very clever diplomacy today may ultimately prove a mere expedient and temporary pause to underlying tensions. Worse, Beijing may be inflating domestic expectations about concessions from Tokyo that, when revealed to be phantoms, could backfire, effectively sharpening this thorn in the side of the frustratingly volatile relationship between Tokyo and Beijing.

If nothing else, the dangerously and increasingly crowded waters and airspace in the East China Sea demand a true bilateral modus vivendi that no longer allows political relations and dialogue to be held hostage to the (de facto) dispute itself and the vicissitudes of domestic political conditions. Severe circumstances demand true statesmenship and political leaders willing to exercise proactive leadership and to burn the domestic political capital necessary to create the enabling conditions to melt the ice. Most urgently, Beijing and Tokyo must fulfill their shared November 7 pledge and immediately adopt concrete measures to significantly reduce the risk of a low-level incident between vessels or planes escalating into a military clash. Neither country, much less the region or world, can afford the alternative. Too many important bilateral, regional and global issues demand the attention of Beijing and Tokyo, who should be working in constructive partnership to help solve them.