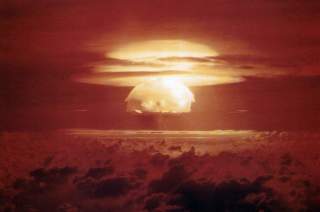 The 2018 Nuclear Posture Review concluded that the U.S. must deploy a small number of low-yield nuclear warheads on its Trident missiles to deter Russian first use of low-yield nuclear weapons for limited nuclear strikes in conventional warfare. It states, “Russia’s belief that limited nuclear first use, potentially including low-yield weapons, can provide such an advantage is based, in part, on Moscow’s perception that its greater number and variety of non-strategic nuclear systems provide a coercive advantage in crises and at lower levels of conflict. Recent Russian statements on this evolving nuclear weapons doctrine appear to lower the threshold for Moscow’s first-use of nuclear weapons. Russia demonstrates its perception of the advantage these systems provide through numerous exercises and statements. Correcting this mistaken Russian perception is a strategic imperative.”[1]

The threat of Russian first use involving limited nuclear strikes was recognized by the Obama administration. In October 2016, Secretary of Defense Ashton Carter stated that “…it’s a sobering fact that the most likely use of nuclear weapons is not the massive nuclear exchange of the classic Cold War-type, but rather the unwise resort to smaller but still unprecedentedly terrible attacks, for example, by Russia or North Korea to try to coerce a conventionally superior opponent to back off or abandon an ally during a crisis.”[2] As Secretary of Defense Jim Mattis has stated, “We want to make certain they recognize that we can respond in kind and that we don't have to go with the high yield weapon.”[3]

Domestic opposition to this NPR decision appears to be largely ideological and ignores the disparity in such weapons that now exists and Russia’s doctrine with regards to the first use of nuclear weapons. There is nothing new about low-yield warheads on ballistic missiles. In addition to Russia, the UK and France reportedly have low-yield ballistic missile warheads on their SLBMs.[4]

Russia reportedly has acquired low-yield, precision low-yield and low-collateral damage nuclear weapons. This was originally reported by distinguished Russian journalist Pavel Felgenhauer who wrote in 2002 that in April 1999 the Russian National Security Council approved a concept for developing and using “…non-strategic low- and flexible-yield battlefield weapons,” and that the yield of these precision weapons would be tens or hundreds of tons of TNT.[5] “Flexible yield” is clearly what we call variable yield or dial a yield. New Russian low-yield nuclear weapons are reported in the Russian press including in the state media. A declassified year 2000 CIA report observed, “Moscow’s military doctrine on the use of nuclear weapons has been evolving and probably has served as the justification for the development of very low-yield, high-precision nuclear weapons. The range of applications will ultimately be determined by Russia’s evolving nuclear doctrine, and could include artillery, air-to-air weapons, ABM weapons, anti-satellite weapons or multiple rocket launchers against tanks or massed troops.…”[6] In 2009, the bipartisan U.S. Strategic Commission report said Russia was developing “…low-yield tactical nuclear weapons including an earth penetrator.”[7]

Actual Russian deployment of strategic low-yield nuclear warheads (tens of tons to 200 tons yield) on Russian SLBMs (the Sineva and Bulava-30) has been reported in the state media (Sputnik News and Ria Novosti), and in the decidedly non-state media, the liberal Ekho Moskvy Radio (in an interview with hardline but well connected Russian journalist Colonel (ret.) Viktor Litovkin.).[8] Since, according to then-Defense Minister Sergei Ivanov, the Bulava-30 SLBM and RS-24/Yars ICBM use the same new warhead, it is nearly certain that the RS-24 also has low- yield options.[9]

Russian media have also reported that Russia has developed and deployed new low-yield tactical nuclear weapons. In 2004, Russian television displayed a new howitzer which it said: “…could be used to fire low-yield nuclear bombs.”[10] In 2013, Academician Yevgeniy Avrorin, a former Director of the Sarov nuclear weapons laboratory (the All-Russian Scientific-Research Institute), in an interview published by the Sarov laboratory, said the Russian 152-mm nuclear artillery shell with “a kiloton yield” has been “broadly deployed” throughout the Russian Army.[11] In 2009, Russia’s main official news agency ITAR-TASS (now called TASS) reported that, “The nuclear submarine Severodvinsk will be equipped with long-range cruise missiles that can potentially carry low-capacity tactical warheads.”[12]The 2018 NPR report indicates that Russia has CRBM (Close Range Ballistic Missiles) which would have to have low-yield warheads because of their limited range. Dr. Philip Karber, President of the Potomac Foundation, has stated that roughly half of Russia’s 5,000 tactical nuclear weapons have been modernized with new sub-kiloton nuclear warheads for air-defense, torpedoes and cruise missiles.[13]

Russia is also reportedly developing advanced low-collateral damage designs. In 1999, Major General (ret.) Vladimir Belous discussed the development of “neutron artillery shells, mortar shells, and operational-tactical missile warheads.”[14] A declassified CIA report gives this some additional credibility, noting, “A number of articles [in the Russian press] suggest that Russia is developing low-yield warheads with enhanced radiation that could be used on high-precision non-strategic weapons systems.”[15] Moreover, in 2013, the Sarov nuclear weapons laboratory said that during the Cold War they had developed a peaceful nuclear explosive (PNE) device that was 99.85% based on fusion.[16] This is essentially a low-yield/low-collateral damage nuclear weapon. The only question would be its size and weight but, worst case, it certainly could be delivered by any strategic bomber which can deliver large and heavy weapons. Vice Admiral (ret.) Robert Monroe, former Director of the Defense Nuclear Agency, has recently stated that Russia is now 20 years ahead of the U.S. in such weapons.[17]

Pavel Felgenhauer has written that the Russian S-300, S-400, S-500 air defense missiles and the Moscow ABM are nuclear capable and have a secondary ground-attack capability.[18] While he did not mention yield, these missiles, two of which the Russians say are designed to intercept ballistic missiles and satellites in near space,[19] would have to have very low-yield warheads unless Russian leaders don’t mind destroying Russia with nuclear EMP effects from their own weapons. Both TASS and Sputnik News, both state media, have confirmed Felgenhauer’s report that the S-300 and S-400 anti-aircraft missiles have the capability to attack ground targets.[20] The 2018 NPR confirms the existence of nuclear warheads on Russian anti-aircraft missiles.[21]

Senior Russian officials have talked about Russian low-yield nuclear weapons. In 2007, Russian Deputy Chief of the General Staff General Alexander Rukshin, said Russia had “…created low-yield nuclear tactical nuclear ordnance with a yield of no more than 5 kilotons, which can be employed on the battlefield.”[22] In 2009, Vice Admiral Oleg Burtsev, then-First Deputy Chief of the Russian Naval Staff, said that tactical nuclear weapons may be the future and, “We can install low-yield warheads on existing cruise missiles.”[23] These statements are particularly interesting because they were made in contravention of the Russian propaganda line that the U.S. was developing such weapons, which was untrue at that time. It is normal for Russia to charge that the U.S. is doing what Russia is actually doing. Further confirmation of low-yield tactical nuclear weapons comes in a March 2009 ITAR-TASS story which said, “The missiles [on the new Russian nuclear submarine Severodvinsk] are capable of carrying low-yield tactical nuclear warheads and are meant to be used against the potential enemy’s aircraft carrying groups.”[24]

In December 2015, President Putin revealed that the Kalibr and Kh-101 cruise missiles used in attacks against Syrian targets, “…can be equipped either with conventional or special nuclear warheads.”[25] Interfax-AVN reported that the Kalibr has a “nuclear kiloton warhead.”[26]

Advanced low-yield  nuclear and thermonuclear weapons were reportedly developed by the Soviet Union in its later years.[27] Russian expatriate Nikolai Sokov writes, “…as early as 1992, Lieutenant General Evgeniy Negin announced that Russia already had developed a miniaturized nuclear weapon.”[28] In 1994, Russian Atomic Energy Minister Viktor Mikhaylov stated that “a new generation” of nuclear weapons could be developed by the year 2000.[29] In 1996, he called for the construction of 10,000 very low-yield nuclear weapons.[30] In August 2003, when he was Director of the Sarov nuclear weapons laboratory, Mikhaylov said Russian efforts to improve thermonuclear weapons continued and that there were weapons “yielding hundreds of tons.”[31] This is more than a low-yield weapon. It would also be a low-collateral damage design (effectively a neutron bomb) which would be cleaner (producing less collateral damage) and more militarily effective than low-yield fission weapons against some targets. That same year he observed, “The philosophy of thermonuclear weapons has changed today, and on the agenda is the development of high-precision and deep-penetration nuclear bombs,” further adding that Russia was ahead of the United States in these weapons.[32] In December 2002, he declared, “The scientists are developing a nuclear ‘scalpel’ capable of ‘surgically removing’ and destroying very localized targets. The low-yield warhead will be surrounded with a superhardened casing which makes it possible to penetrate 30–40 meters into rock and destroy a buried target—for example, a troop command and control point or a nuclear munitions storage facility.”[33] These are very impressive characteristics. Since this was said 16 years ago and Mikhaylov also said that it would take 10-20 years to develop this weapon, these weapons could already be available. In March 2004 Mikhaylov again stated that, “Thermonuclear weapons development philosophy has changed and work is being conducted on the development of precision-guided munitions with penetrating capability.”[34]