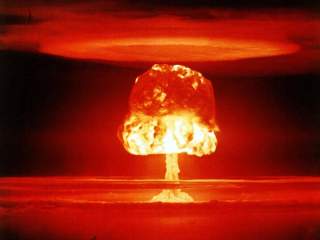 North Korea looks set to conduct a space launch in the near future. But while space launch capability is not a threat in and of itself, the same technology could be used to develop an intercontinental ballistic missile (ICBM)—one with the potential to hit major cities in the continental United States. For example, North Korea's Unha-3—which might have an range as great as 6,000 miles—could theoretically hit targets as far away as Los Angeles. Moreover, Pyongyang—which recently tested what appears to be a boosted fission bomb—brags that it already has the capability to miniaturize a nuclear weapon to fit atop an ICBM. Some U.S. officials agree with that assessment.

“I believe they have the capability to have miniaturized a device at this point, and they have the technology to potentially actually deliver what they say they have,” Gen. Curtis Scaparrotti, commander of U.S. Forces Korea, told reporters in October 2014. “We have not seen it tested. And I don’t think as a commander we can afford the luxury of believing perhaps they haven’t gotten there.”

But as with almost all North Korean developments and proclamations from the exalted “supreme leader” Kim Jong-un, it’s hard to say what’s real and what’s a delusional fantasy. Nonetheless, Washington has to take the possibility of a nuclear-tipped North Korean ICBM seriously. What, then, can the United States do to stop a North Korean ICBM that’s headed towards the American homeland?

To a large extent the United States has prepared from this eventuality. The best way to stop a North Korean ICBM would be to eliminate the target before it’s launched. But if the regime in Pyongyang—in a move that would guarantee a devastating U.S. nuclear retaliation—manages to launch a missile towards an American city, Washington has an operational missile defense system in place.

The Missile Defense Agency’s Ground-based Midcourse Defense (GMD) element provides Washington the ability to destroy a limited number of incoming intermediate and long-range ballistic missiles threats in space to defend the United States. There are interceptors already in place at Fort Greely, Alaska, and at Vandenberg Air Force Base, California. Right now there are a total of thirty interceptors deployed, but there are plans to add fourteen more missiles. The system was tested as recently as this month. Still, there are questions about the GMD’s reliability.

But GMD is just one element of a layered U.S. missile defense system. This week, the commander of U.S. Pacific Command voiced his support for placing an Aegis Ashore system on the Hawaiian Islands. “I've gone on record as talking about the Aegis Ashore facility in Hawaii. My point on that is it is something that we should consider," Adm. Harry B. Harris told an audience at the Center for Strategic and International Studies on January 27. Harris also said that the U.S. Army should permanently base a THAAD battery in Guam in case of a North Korean attack—though the weapon would also useful against Chinese missiles.

Eventually, THAAD battery could conceivably be stationed in South Korea too.