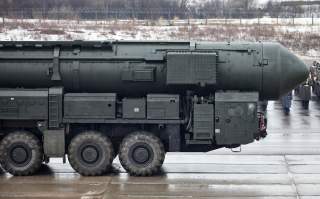 The U.S. military conducted a successful intercontinental ballistic missile (ICBM) intercept test Tuesday, but it is unclear how the U.S. missile shield would hold up in the event of an actual ICBM strike.

The U.S. military is heralding the test as a major success, one that ensures the U.S. is protected against ICBM threats from rising challengers, such as North Korea. “I was confident before the test that we had the capability to defeat any threat that they would throw at us,” Vice Admiral Jim Syring, director of the Missile Defense Agency, told reporters at a post-test press briefing. “I’m even more confident today after seeing the intercept test yesterday that we continue to be on that course.”

“This test was similar in nature to the type of threat we would expect to defend against,” MDA Public Affairs Officer Chris Johnson told the Daily Caller News Foundation.

During Tuesday’s ICBM intercept test, several sensors, including infrared satellites and radar systems, detected and tracked an incoming missile, according to Thomas Karako, the director of the Missile Defense Project at the Center for Strategic and International Studies. A sea-based X-band radar provided high-resolution images of the missile target, allowing the Ground-based Midcourse Defense (GMD) system to distinguish the missile from debris and decoys and move to eliminate the threat.

After exiting the atmosphere, the interceptor missile released a Exoatmospheric Kill Vehicle that identified the warhead and adjusted course for a direct collision.

“This is a good day for homeland missile defense and a bad day for Kim Jong-un,” Karako said in response to the intercept test.

“The test was a success by its own standards,” Melissa Hanham, an arms expert and senior research associate in the East Asia Nonproliferation Program in the James Martin Center for Nonproliferation Studies at the Middlebury Institute of International Studies, told TheDCNF. “But there were probably a lot of differences from what a real nuclear strike might look like.”

The ICBM was fired from a known location, the Reagan Test Site on Kwajalein Atoll in the Marshall Islands in the Pacific. The defending interceptor team had advanced knowledge of when the mock ICBM was coming, as well as the trajectory, the MDA revealed. However the system relied solely on data provided by real-time surveillance equipment, so it was reportedly responding much as it would during an actual combat situation.

“If North Korea was actually going to attack the U.S., not just launch a single test ICBM, they would launch everything they had. It wouldn’t resemble this test,” Hanham said. “If we are talking about war with Russia or China, this is not at all a good test. Russia and China would have many ICBMs with confusers and multiple independent re-entry vehicles launching from many different locations at very hard to determine times and targeting all over the country.”

Missile defense, hitting a bullet with a bullet, is a very challenging task that is difficult to master, especially without a real combat scenario to test effectiveness. “People think missile defenses are a magic wand. They aren’t,” Jeffrey Lewis, a renowned arms expert, told TheDCNF. The U.S. missile shield has a test success rate of 55 percent, with eight failures out of 18 interceptor tests.

The GMD system “has not demonstrated through flight testing that it can defend the U.S. homeland against the current missile defense threat,” the Government Accountability Office reported in 2016. The Fiscal Year 2016 report on ballistic missile defenses from the Office of the Director of Operational Test and Evaluation declared that the GMD system “demonstrates a limited capability to defend the U.S. Homeland from small numbers of simple intermediate-range or intercontinental ballistic missile threats launched from North Korea or Iran.” The report adds that the GMD system has low reliability.

“Let us say that there is someone on the other side of a large room shooting at you and you are shooting back. Maybe you could ricochet one of the bullets if you are an excellent marksman, but you are still going to get hit with other bullets,” Hanham said. “In the best case scenario, [missile defenses] could protect some places some of the time. They could reduce casualties, but it’s not a force field.”

“I don’t think that Americans should take this test as the reason that they sleep soundly at night,” she told TheDCNF. Hanham explained that Tuesday’s ICBM intercept test is a “stepping stone” to improved defenses.

The U.S. military will conduct another experiment next year, firing two interceptors at a single ICBM in a “real world” test next year, a defense official revealed Wednesday. Boeing has been awarded a $58.6 million contract for the development of interceptors that can destroy multiple warheads simultaneously. This type of technology is expected to be demonstrated by 2025, but until then, the U.S. is protected by GMD system tested Tuesday.

For the time being, North Korea does not have an ICBM, but it is moving in that direction. China and Russia are also rapidly improving their ICBMs.