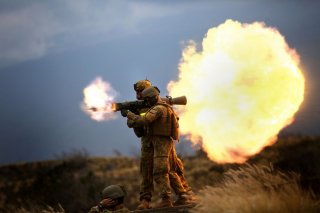 The United States must include the People’s Republic of China in any future regional security architecture in the Asia-Pacific region—according to the U.S. Navy’s top uniformed officer. Not including Beijing in such a framework would ultimately result in a costly failure for Washington’s ambitions in the region.

“I think that any regional security architecture in the Pacific that excludes China is one we just have to go back and readdress,” chief of naval operations Adm. John Richardson told an audience at the Center for American Progress on Sept. 12. “To just sort of pretend that China is not going to be there is, I think, just unrealistic. I think it must include China.”

Richardson said that as China grows in its stature, Washington should not be surprised that Beijing wants to project its power globally. As part of China’s growth, Beijing will inevitably move toward the sea as the United States did during late 1800s.

“We shouldn’t be surprised that China is moving toward being global,” Richardson said. “Part of that global move is going to be a move to the sea...90 percent of the global goods still travel by sea and China is a major player in that global economy. It’s no surprise they should have interests in the maritime domain—not only for economic reasons, but right behind that is security reasons.”

Richardson’s thinking seem to mirror that of the legendary naval strategist Rear Adm. Alfred Thayer Mahan, who was president of the United States Naval War College in the 1890s. In his seminary work The Influence of Sea Power upon History, 1660–1783, Mahan analyzed the role of naval power in building and maintaining the globe-spanning British colonial empire.

“Such influence, to work without jar and friction, requires underlying military readiness, like the proverbial iron hand under the velvet glove,” Mahan wrote in the December 1890 issue of The Atlantic. “To provide this, three things are needful: First, protection of the chief harbors by fortifications and coast-defense ships, which gives defensive strength, provides security to the community within, and supplies the bases necessary to all military operations. Secondly, naval force, the arm of offensive power, which alone enables a country to extend its influence outward. Thirdly, it should be an inviolable resolution of our national policy that no European state should henceforth acquire a coaling position within three thousand miles of San Francisco.”

Modern day China seems to be following a twenty-first century version of Mahan’s doctrine. While Chinese actions in the Western Pacific might provoke a security competition with the United States under a strictly realist view of the international order, Richardson seems to believe that Beijing can be persuaded to join an American-led liberal-institutional world order. “The future architecture—both economic and security—is going to have to include the Chinese, I think,” Richardson said.

Under the liberal-institutional worldview, Beijing would recognize the benefits to a “rules-based” international order and work to fit into its existing structures. It remains to be seen if China will ultimately acquiesce to a Washington-led world order. However, China’s reaction to its recent loss against the Philippines at the Permanent Court of Arbitration in The Hague suggests that Beijing will not be satisfied with a subordinate role within the current system as its power continues to grow.