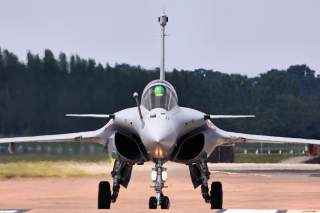 France has a deep and abiding relationship with nuclear technology. French policy-makers have based France’s energy and military independence around nuclear programs. However, as the French government attempts to justify its budget policies in the lead-up to the presidential election in April 2017, calls for a public debate on the cost of military nuclear deterrence are increasing.

Questions about the future of the nuclear program come from the growing cost of France’s nuclear deterrent. France’s nuclear arsenal is currently fully operational but will soon require a complete modernisation. Within the next 30 years, French forces will need new submarines, aircraft and missiles. To achieve this, France’s current military nuclear expenditure of €3.4 billion a year, which equals 10% of the French Ministry of Defense’s total budget, will need a significant increase. By 2025, nuclear deterrence will cost French taxpayers an estimated €6 billion a year or more. Where will future French governments find €120 billion over 20 years?

Even faced with budgetary constraints, it seems very unlikely that France will give up the modernization of its nuclear program, which is key to its defence strategy. French public opinion and policy-makers are deeply attached to maintaining France’s strategy of sovereignty and independence, as explained in the most recent French Defense White Paper in 2013. However, some French policy makers have criticised Paris’ reliance on nuclear deterrence, asserting that a modernization of the equipment constitutes vertical proliferation. By doing so, it’s argued, France would contradict its commitment to nuclear non-proliferation and send the wrong signal to Asian nuclear powers.

Nonetheless, if France chooses to maintain its nuclear arsenal, how should it be composed? President Hollande has explained that France plans to maintain the two elements of France’s nuclear strike: submarines and jet aircraft. That decision is contested by Major General Vincent Desportes, a French professor of strategy who believes that France should modernize its nuclear submarine program but should fully dedicate its airpower to conventional operations. That would reduce nuclear costs and provide more equipment to support the troops. The new French President will have to choose to either support modernization studies of both nuclear armed submarines and aircraft, or to choose one.

If, as seems likely, the next government decides to renew its nuclear-armed submarines, DCNS should start building France’s third generation of deterrent submarines by 2019. The costs will be considerable, since Paris will have to modernize its nuclear missiles and communication capabilities for command and control. These new missiles would then be delivered by 2035 with the first new submarine. Moreover, if France were to decide in 2017 to renew its airborne nuclear delivery capability as well, the country would have to dedicate a significant part of its airpower to nuclear deterrence. After all this movement Paris would have two options to manage its defense budget.

The first option would be to reduce the budget dedicated to conventional forces. In a context of considerable terrorist threats and French involvement in several military operations in the Middle East and Africa, that option would deeply challenge France’s security policies. It seems difficult to imagine how the state could make more cuts to the defense budget, which has already been reduced by 20% between 1980 and 2014, with troop numbers recently reduced from 330,000 to 275,000. Moreover, in 2015, François Hollande increased the defense budget and put an end to troop cuts, arguing that France, faced with critical threats to its security, needed a stronger army. Further weakening French conventional forces would then seem dangerous.

The second option would be to substantially increase the defense budget as a whole in order to maintain funding to conventional forces while modernizing the nuclear arsenal. France currently spends 1.78% of its GDP on military expenditure, but would need to increase spending to at least 2% in order to fully finance the modernization of its nuclear arsenal. This option is politically difficult to implement because public opinion would criticise any government cutting €120 billion from education or other public services over the next two decades.

Discussions about the future of nuclear deterrence have been rare. ‘It has been 50 years that French people are not consulted on the matter. There is a sort of soft consensus,’ explains Major General Desportes. But that unquestioned acceptation of deterrence programs is beginning to be challenged. It will be interesting to see if French deputies and senators will be allowed by the next President to debate such a crucial issue, for the sake of France’s democracy.