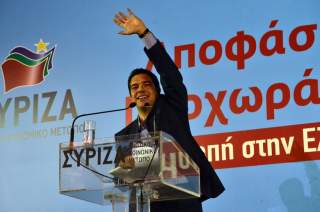 Syriza’s electoral triumph in Greece earlier this year was dramatic evidence of ordinary Greeks’ exasperation with the politics of austerity. But since taking office, Prime Minister Alexis Tsipras has found it difficult to deliver on his campaign pledges to improve Greece’s lot. Popular at home, Tsipras has run into roadblocks abroad—particularly in Brussels and Berlin. His torrid time parlaying domestic success into an international agreement on Greece’s future reveals a lot about the limits of democratic decision making in an integrated Europe.

Feeling little responsibility for the imprudent decision making of their political leaders and financial sector, voters in Greece resolved in January not to pay the full price for their country’s mismanagement—or, at least, to take greater control over how the costs of the financial crisis should be borne. To ordinary Greeks, it is perverse that common people—who, after all, exercised little agency over their country’s erstwhile fiscal policies—should undergo a form of collective punishment for what is essentially an elite-driven economic crisis. Even a radical overhaul of the current economic and political order seems more reasonable to these voters than a system that penalizes the powerless for the mistakes of the powerful.

Such sentiment is not confined to Greece, of course. Instead, Syriza’s popularity is indicative of wider trends across Europe: a broad challenge—both intellectual and popular—to the elite consensus that currently underpins economic organization in Europe. For years now, the economic orthodoxy in European capitals has been that nation-states should entrust their futures to the invisible hand of globalization by (1) committing to free markets and open capital accounts as ways to drive economic growth and (2) abstaining from ambitious fiscal and independent monetary policies.

This brand of globalization was relatively popular among Europeans—celebrated, even—when the going was good. Only those on the political fringes saw fit to criticize the way that Europe’s states were committing to ever closer union. Since the onset of the so-called Great Recession, however, the naked impotence of Europe’s elected governments to alleviate the hardships of those on the losing end of economic liberalization has catalyzed criticism of globalization as a project and as an endgame—particularly in those places hit hardest like Greece, Spain and Ireland, but also in the wealthier corners of Europe. The human vulnerability endemic in the system has been laid bare, fueling the rise of anti-austerity and pro-democracy movements like Syriza.

Yet Syriza is not against all forms of economic cooperation—or even all forms of globalization. For as Princeton economist Dani Rodrik points out, globalization in its ultra laissez faire guise has never been the only brand of economic integration on offer. Instead, Rodrik describes globalization in the modern era as a choice (a “trilemma”) over which two of the following three goods should be prioritized: (1) deep economic integration (that is, unfettered markets and open capital accounts); (2) democratic politics; and (3) the nation-state as a viable political unit.

All three objectives are desirable in their own right, Rodrik explains. The problem is that only two of the three can co-exist at any given time; the trifecta is impossible to achieve in practice. In short, Rodrik points to three ideal-type responses to the structural trilemma: the “golden straitjacket” (when autonomous nation-states agree to cooperate in the name of deep economic integration, regardless of what democratic publics might desire); “global federalism” (the privileging of deep economic integration and democratic politics over the nation-state); and the “Bretton Woods compromise” (whereby democratic nation-states accept an international economic order characterized by only limited economic integration).

Syriza’s electoral success is a manifestation of popular antipathy towards the golden straitjacket brand of globalization. For Syriza and their fellow travelers, the short-term pain of austerity cannot be countenanced because it is fundamentally at odds with the popular will. Instead of passively accepting that the price of remaining inside a currency union and adhering to the fiscal pacts of the eurozone is to ignore what a broad cross-section of the Greek people wants, the correct response according to the left is to launch an active public-sector effort to revive a battered national economy.

Clearly, then, Syriza’s favored alternative to the hated golden straitjacket most resembles Rodrik’s description of Bretton Woods: a bargain that allows nation-states such as Greece to take “time out” from deep integration to cater to exigencies on the domestic front, but still preserves some basic level of state-to-state economic cooperation. And, indeed, Prime Minister Tsipras has enjoyed limited success at wresting control of Greek fiscal policy away from the supranational institutions of the European Union and International Monetary Fund.

Ultimately, however, Tsipras’ demands for national autonomy will run up against the structural constraints of the trilemma. At some point, exceptions for Greece become incompatible with the deep economic integration so cherished across Europe—especially if other hard-hit European economies begin to demand similar opt-outs for themselves. Angela Merkel and other defenders of the status quo recognize this, which is why they are resolved to keep Greece locked into the golden straightjacket as much as is diplomatically possible.

As Maria Margaronis has written in The Nation, “Syriza has a double mandate—to end austerity and restore lost rights while staying in the eurozone. These things may well turn out to be incompatible, but polls show that around three-quarters of Greeks still want them both.” This, in essence, is Alexis Tsipras’ own political conundrum: continue to fight for an international settlement that is practically impossible to achieve or admit to the national electorate that the country’s future is out of its hands for as long as it remains in Europe?