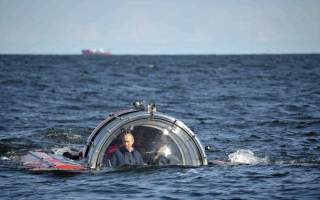 While out of area operations were in vogue for U.S. European Command and the NATO alliance during the previous decades of the post-Cold War era, Russia once again the single greatest threat American forces in Europe face. Indeed, America’s top military officer in Europe believes it will take more than just military power to combat a resurgent Russia.

“Our highest strategic priority as a Combatant Command is to deter Russia from engaging in further aggression and exercising malign influence over our allies and partners,” Gen. Curtis M. Scaparrotti, commander of United States European Command and NATO Supreme Allied Commander Europe, said in his written testimony before the Senate Armed Services Committee on March 8. “In accordance with the NDS [National Defense Strategy], and thanks to Congressional support, we are working to create a combat-credible posture in Europe that will underpin our deterrence. We are updating our operational plans to provide military response options to defend our European allies against Russian aggression. Finally, we are increasing our efforts to counter Russia’s malign influence in Europe and compete below the level of armed conflict. This includes supporting the Russian Information Group (RIG), an interagency effort to counter Russia’s propaganda and misinformation campaigns.”

Countering Russian power will take more than military force; it will take the entirety of the U.S. government's efforts to beat back the Kremlin, according to Scaparrotti. “To effectively expand our competitive space with Russia we must have a whole of government approach that employs all elements of our national power,” Scaparrotti said. “Visible political, economic, and military commitments are critical in deterring Moscow while reassuring allies. Continued Congressional support is essential to our nation’s ability to successfully compete with Russia over the long-term, shore up the international order, and preserve European security.”

But according to Scaparrotti, the Russian threat goes well beyond Europe, it extends across the globe in many ways. “The threat from Russia is not limited to the European theater but extends all along its periphery and beyond. Russia is exerting its influence in the Middle East, where its intervention in the Syrian civil war bolstered the Assad regime, enabling the expansion of Iranian influence across the Levant,” Scaparrotti said. “Russia is also increasing aid to Middle-East states, deepening collaboration with Iran, and extending its influence in Saudi Arabia, Egypt, Libya, and Cyprus. These efforts are changing regional dynamics, adversely affecting Israel’s security, stability in Lebanon, and other U.S. interests in the region.”

Ultimately, Scaparrotti believes that Russia hopes to rewrite the international order in its favor. “Russia continues to destabilize regional security and disregard international norms, which have preserved the peace in Europe since 1945,” Scaparrotti said. “Russia seeks to change the international order, fracture NATO, and undermine U.S. leadership in order to protect its regime, re-assert dominance over its neighbors, and achieve greater influence around the globe. To achieve these ends, the Kremlin is prepared to employ the full spectrum of Russia’s power, to include forcefully using its increasingly capable military.”