Can Safe Zones in Syria Work? 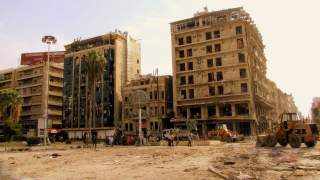 In an interview with ABC News this week, President Trump made brief reference to his plan to set up “safe zones” in Syria or in the region for refugees to return to as they await eventual resettlement. Trump remarked, “I’ll absolutely do safe zones in Syria for the people” without adding more.

A draft of the executive order, leaked to the press, adds a few more details:

The Secretary of State, in conjunction with the Secretary of Defense, is directed within 90 days of the date of this order to produce a plan to provide safe areas in Syria and in the surrounding region in which Syrian nationals displaced from their homeland can await firm settlement, such as repatriation or potential third-country resettlement.

The new President has yet to sign this order and it could certainly be revised in the coming days. Regional partners along with the Syrian government were also caught off guard by this announcement.

President Trump’s wager to provide humanitarian safe spaces for the millions of Syrians displaced from the conflict is a sensible option, but raises more questions than it answers at this stage. General Mike Flynn, Jim Mattis and Rex Tillerson will have to grapple with these questions in the coming weeks:

Syria’s neighbors already have sizeable refugee populations (in addition to Europe) which are straining Lebanon and Jordan’s economies in particular. Non-regime and ISIS-held areas exist in parts of northern and northwestern Syria along with border areas of Jordan and pockets throughout the rest of the country. It’s not yet clear whether such “safe zones” will be in Syrian territory (regime or non-regime) or parts of neighboring states.

The US may back the creation of these “safe zones” but it would be too far reaching to assume that Washington is in the business of running and securing these areas. If they exist within Syria, they would likely be the responsibility of Turkey, Jordan, and potentially Russia or the UN’s to provide security. It’s unclear who will pay the bill. While it’s hard to see President Assad’s forces involved in these “safe zones,” it’s not too soon to rule out such a possibility. If these zones are merely within other countries, Washington will likely have to work with their regional partners to both agree to set them up and develop the parameters for these areas. They will also have to work out which refugees are to be settled into these areas. Absorbing more refugees may not be high on their list. Amman, Ankara, or Beirut would likely then push for financial incentives from Washington. President Trump may even look to Saudi Arabia, the UAE, and Qatar to pay for them.

Depending on their design, without economic enticement and security guarantees, these zones may or may not be able to sufficiently entice refugees to leave Europe and other parts of the world to return to. It’s unclear as well how they will be governed and run the risk of potentially turning into places where Syrians are left with little normalcy or future. With the collapse of the Syrian state, unless there’s a multi-lateral plan to reconstruct Syria, Washington may end up owning these areas for the indefinite future.

While this move is more pro-active than President Obama’s indifference, it would be a mistake to assume that the new administration is looking to sign the US onto indefinite troop presence in and around Syria, as some of commentators have concluded. It’s instead a pro-active fix to a deepening challenge that requires multi-lateral support. The White House would be wise to push for the Gulf States and Europe, who have a larger stake in Syria’s future, to underwrite these costs. It comes down then to literally the “art of the deal” and an important first test for the new administration in the region.

Andrew J. Bowen is a visiting scholar at the American Enterprise Institute (AEI), where he focuses on Saudi Arabia and the Gulf States. Concurrently, he advises Greenmantle, an economic and geopolitical advisory firm, and writes a weekly column for Arab News and Al Arabiya English.

This first appeared on the AEI Ideas blog here.