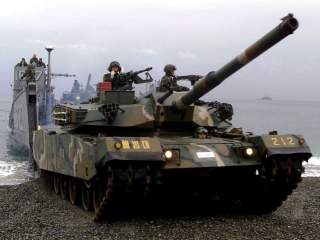 As tensions with North Korea rise following Pyongyang’s alleged hydrogen bomb test, there is the specter of a renewed war on the peninsula.

In the years following the Korean Armistice Agreement in 1953—which ended the conflict in a ceasefire without formally terminating hostilities—the U.S. military was the guarantor of the Republic of Korea’s (ROK) security. More than sixty years later, United States Forces Korea (USFK)—ed by U.S. Army Gen. Curtis Scaparrotti—maintains a force of over 28,500 troops in South Korea to defend Seoul from Pyongyang’s depredations. But by-and-large, South Korea is defended by its own large, well-trained and well-equipped forces—albeit under U.S. command during times of war.

Indeed, with 630,000 troops under arms and equipped with advanced hardware, the Republic of Korea Armed Forces (ROKAF) had been slated to take wartime command of its own forces by December 2015, but the United States agreed to delay the transfer of command to allay the fears of South Korean conservatives until about the mid-2020s.

South Korea has also asked the United States to delay moving its frontline combat troops away from the border with the North. That means that the U.S. Army will keep the 210th Field Artillery Brigade and its M270A1 Multiple Launch Rocket System (MLRS) batteries in place at Camp Casey in Dongducheon—just north of Seoul. Those artillery pieces are part of the Combined Forces Command’s defenses against the mass of North Korean artillery that could reduce the massive city to smoldering rubble in a matter of hours.

If the situation on the Korean peninsula does ever degenerate into a new shooting war, Seoul would likely be badly damaged. But apart from the loss to the city, the ROKAF would be more than capable of handling the Korean People’s Army (KPA) during any conflict short of a nuclear war or direct intervention by the People’s Republic of China—where Washington would have to step in with its vast arsenal.

The North’s KPA—while it is enormous—is mostly trained and equipped with antiquated Soviet hardware from the 1950s and ‘60s. While the KPA has some modern elements and has a number asymmetrical capabilities it hopes might be able to offset its massive technological and training deficit, North Korean forces are not likely to be a match for the ROKAF in a conventional set piece battle. The only factors in their favor are sheer numbers.

The most threatening component of the KPA is the Korean People's Army Ground Force (KPAGF)—which has thousands of tanks and artillery pieces. North Korea’s most advanced tank is the P'okpung-ho—of which it has perhaps 500 examples—but the is vehicle is a poorly reverse-engineered version of the Soviet T-62 (with elements drawn from the T-72 and other Chinese tanks). The rest of the KPA’s vast tank armada is comprised of antiquated Soviet T-55s, T-62s and Chinese and indigenous knockoffs of those Russian designs.

None of those machines are a match for the ROK Army’s (ROKA) nearly 1,600 modern indigenously built K1, K1A1 and K1A2 main battle tanks—let alone the new K2 Black Panther. While outnumbered, the ROKA’s tank fleet is vastly qualitatively superior in equipment and training—which is a combination that can produce lopsided victories as Operation Desert Storm showed in 1991. But if qualitative superiority wasn’t enough, the RKOA also has about three-dozen Russian T-80Us main battle tanks and thousands of older—but upgraded—M48 Pattons to bulk up its forces. While the two sides’ tank forces are but one example—it’s a pattern that repeats itself across the range of forces available to both the North and the South.

The ROK Air Force is another example where the South has overwhelming qualitative superiority. The most advanced aircraft in the Korean People's Army Air Force (KPAAF) are its fleet of thirty-five early model Soviet-built Mikoyan MiG-29 Fulcrums, which are formidable threats only if they survive long enough to get within visual range. The rest of the KPAAF is comprised of mostly of antiquated Chinese-built copies of the MiG-17, MiG-19 and MiG-21. The low number of flying hours and training their pilots receive compounds the KPAAF’s technological deficit.

The only wild card is North Korea’s dense air defenses—which are similar to the force Iraq fielded before Operation Desert Storm in 1991. While the bulk of KPA’s surface-to-air missiles (SAMs) are elderly weapons, those systems could pose problems for ROKAF air operations over the North until they are eliminated. Most of Pyongyang’s air defenses use old Soviet weapons like the S-75 Dvina (SA-2 Guideline), S-125 Neva (SA-3 Goa) and the S-200 Angara (SA-5 Gammon)—which are relatively simple to eliminate. However, there are some unconfirmed reports that suggest North Korea may have gotten its hands on a reverse-engineered copy of the powerful Russian S-300 and 9K37 Buk systems—which are very difficult to counter. However, that’s probably not likely.

It’s not entirely in South Korea’s favor—Pyongyang would do a lot of damage to the South with its artillery and ballistic missiles. South Korea has not invested adequately to counter the North’s ballistic missile threat. Seoul has only bought a handful of Patriot batteries—some of which are going to be upgraded to the PAC-3 standard—but that’s not enough to ward of the Pyongyang’s missiles. The ROK needs to invest in more PAC-3 (or Lockheed’s Medium Extended Air Defense System (MEADS)) batteries and should very seriously consider acquiring a substantial number of the U.S. Army’s Terminal High Altitude Area Defense (THAAD) missile defense system to provide more comprehensive coverage.

Ultimately, however, if it came to a shooting war with the North—unless the conflict were to become a nuclear confrontation (which it very well could) or China intervened—the ROK would be able to handle an invasion by the so-called Democratic People’s Republic of Korea. South Korea country would suffer serious damage in such a confrontation, but the ROKAF is now strong enough to take on KPA without outside assistance. Nonetheless, Seoul is not likely turn down military assistance from the United States any time soon.