Can Syria Wreck the EU? 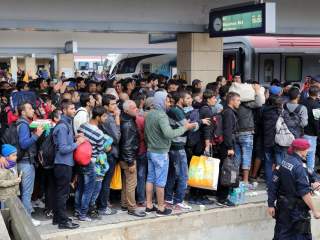 The European Union was, is and should stay the most successful transnational enterprise for peace and prosperity in the history of the modern nation state. But it's under challenge from Syria. Syria, in this case, is shorthand for the triple crisis rocking Europe to its core: the migrant flood; the politics of Putin and Erdoğan at the EU's borders; and the rise of nationalism in various member countries.

In the eyes of the huddled masses of this world, Europe's attractiveness is rivaled only by the United States and Australia. Thus a huge number of economic migrants from the Middle East and Africa have joined the political refugees from Syria and from Daesh-occupied Iraq to seek a new life in Europe.

Yet Europe is still fully immersed in the complex process of integrating its internal market and social zone. The huge wave of migrants that flooded in last year—and is likely to build again with spring coming—is beyond Europe's integration capacity. The task is made harder as the migrants come from social, cultural and religious backgrounds very different to most Europeans’.

Any kind of blurring of the clear demarcation line between church and state in Europe is unthinkable but Europeans are gradually realizing just how different the reality is in many parts of the Muslim world. Islam and democracy are not contradictory, per se, but can only co-exist when strictly separated in every sphere of life, as the Turkish intellectual and artist Zülfü Livaneli states in defense of the French principle of 'laicism'.

The traditional role of women in Muslim societies is also a concern for many. “Sex is sick in the Muslim world,” notes Morocco's preeminent journalist Kamel Dahoud, since its interpretation has been left to radical imams and Islamic teachers. Margot Wallström, the former Special Representative of the UN Secretary General for sexual violence in conflicts and a lifelong advocate of gender equality, has stressed repeatedly that the systemic denigration of women in the Muslim world is not a social but a penal issue and should be pursued by the state.

With ever more migrants arriving, the already complex process of integration has become impossible. If stopping the flow is not possible, it at least needs to be slowed and a realistic scenario developed for many refugees to return to Syria. This is even more crucial for the economic migrants; only a small percentage of these can be absorbed by the European labor market if its social achievements are to be preserved.

Yet at this time, a solution to the Syrian problem, including the destruction of Daesh, is being sabotaged by Russia and Turkey. Both Czar Vladimir and Sultan Recep will ultimately leave their countries in a worse state than before. Erdoğan is pushing Turkey back into the “Middle Eastern swamp” (to quote Livaneli) from which Ataturk extracted the country.

For his part, Putin, with his aggression in Eastern Europe, cynical bombing of civilians in Syria, and politics that drag down Russia's already disastrous economic performance, is leading his country back to Soviet times; to the era when Moscow's seat at the global table was based solely on its physical size and nuclear weaponry.

The West, and Europe in particular, cannot wait any longer. More political and economic pressure on Turkey and Russia is a must. If Erdoğan's personal power, his hatred of the Kurds and his Sunni dogma are really more important to him than Turkey’s traditional moorings in the West, then Turkey’s NATO membership, let alone the EU accession talks, must be suspended, regardless of the cost involved in stationing the West's military outpost elsewhere.

Similarly, despite German misgivings, economic pressure on Russia has to be ramped up. Surely the historically successful blueprint for isolating the Russian economy can be extracted from a Cold War filing cabinet and applied without much damage to the global economy?

Of course, none of this will be easy to implement but the alternative is to allow these two-bit dictators to continue wrecking the union of Europe. Yet, right at this time when the EU should be weighing major policy changes and discussing them with its allies, especially the United States, national egoism and electioneering on the lowest rung of nationalist policies reign supreme.

Hungary and Poland are on the populist and right-wing end of the political spectrum already and some of their neighbors are on a slippery slope to join them. This is unacceptable from countries only recently brought out from Soviet tyranny and put back on their economic feet by public and private capital from the West.

The migrant wave is fueling nationalist policies in Europe and promises to ‘build a wall’ have become a staple across the globe. Thus the disturbing scenes from both the Balkan route—where migrants are left in limbo between the Greek Islands just off the Turkish coast and the newly closed Macedonian border with Greece—and from the English Channel in Calais.

The Channel is England's wall; the UK has joined other EU members in refusing to participate in a more equitable distribution of migrants already on the European continent. However, contrary to other parts of the EU, there is no shortage of migrants hoping for a better life on the other side of the Channel. Most of them rejected another European destination before their Calais shelters were torn down by the French police.

And then there is the looming specter of Brexit. Of all times, the UK has chosen now to throw one of its isolationist fits. Last month David Cameron managed to hold a particularly crucial European summit on the migrant crisis hostage to his demand to rearrange minor bits of furniture in the European house. Thus the EU, its economy and indeed good parts of Western policy in general will be blocked through to the referendum vote late in June and possibly much longer. What if, as many are now predicting, the UK as a whole votes to leave but Scotland, and possibly Wales, vote in favor of staying in the EU? Will there be another Scottish independence vote? It seems more and more like wishful thinking to suppose the referendum will bring all of the distracting speculation to an end.

Syria, and all it stands for, could indeed wreck the EU, if Europe continues to let itself be nobbled by nationalist policies and minor figures (historically speaking) in countries which should have both the hindsight and foresight to do better. There is nothing fundamentally wrong with both the idea and its execution of the EU. It's the men behind it (and it is mostly men) who could bring it down.

Daniel Woker is the former Swiss Ambassador to Australia, Singapore and Kuwait and now a Senior Lecturer at the University of St Gallen. This article first appeared in the Interpreter.