Can the BRICS Dominate the Global Economy? 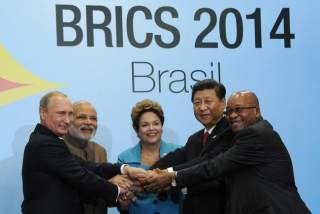 Brazil, Russia, India, China, and South Africa have thrown down the gauntlet at the feet of the West. Last month these five emerging economies launched a New Development Bank - nicknamed the "BRICS Bank" - that combines features of the World Bank and International Monetary Fund (IMF). Meanwhile, China has proposed an Asian Infrastructure Investment Bank (AIIB) that could compete with the Asian Development Bank (ADB). These initiatives represent the first serious institutional challenge to the global economic order established at Bretton Woods 70 years ago this summer. The psychology behind them is clear, as advanced countries have damaged their own credibility as responsible economic stakeholders in recent years and have failed to fully accommodate the rise of the new powers. Less clear is how much of a substantive improvement these new institutions will make to global governance - or even to the interests of the countries championing them.

At first blush, it is difficult to take the new BRICS Bank seriously. The five founding members were brought together by little more than a clever acronym and a shared desire to send a message to the West. The differences among the five in economic heft, political orientation, and geostrategic interests are cavernous. Moreover, the initial paid-in capital of only $10 billion is a drop in the bucket compared to the development challenges the bank is intended to address.

But the BRICS Bank reflects a real grievance on the part of the emerging world about the state of global economic governance, including the recurring financial crises emanating from the United States and Europe in recent years and the failure of advanced countries to reallocate "shares and chairs" to emerging economies in existing institutions such as the IMF. Moreover, if managed well, the BRICS Bank could make a useful contribution to global development. Yet it could also undermine the global rules-based system that has largely served the economic interests of the BRICS well over the past seven decades.

When representatives of 44 allied nations, mostly from North America and Europe, assembled in New Hampshire in July 1944, they had three principal goals in mind. First and foremost was to construct a rules-based international economic architecture that would help prevent a recurrence of the chaos and devastation of the previous 30 years. Second was to rebuild the war-torn economies of Europe and Asia and lay a foundation for long-term global prosperity. To meet these first two objectives, the delegates at Bretton Woods created the IMF to promote macroeconomic cooperation and discourage beggar-thy-neighbor currency policies, the World Bank to oversee reconstruction and development, and the building blocks of what later became the World Trade Organization to discipline global trade. The North Atlantic powers then met their third objective - preserving their leadership in global affairs - by tilting governance of these institutions in their favor.

Arguably, both the BRICS Bank and China's proposed AIIB have been motivated by three similar objectives - only in reverse order. More than anything, the founding members want to establish themselves as leaders in global affairs; they want to sit in the big chair at the head of the table and hold the gavel. Second, they seek to promote economic opportunity, though with a distinctly mercantilist bent favoring their own commercial interests. Making a positive contribution to the global rules-based order is a tertiary consideration at best.

To be sure, the willingness of the BRICS to invest in infrastructure and sustainable development is welcome. The World Bank estimates infrastructure needs in developing countries of around $1 trillion per annum through 2020. If China and other successful emerging economies can share their development experience and capacity with poorer nations, this would add to global welfare.

But are new institutions - especially ones that raise a number of serious governance and operational questions -really needed to meet these ends? The founding members of the BRICS Bank say they intend to share voting power equally within the existing group and to yield shares to new members as they join. Yet unless the BRICS Bank is going to remain a limited experiment, will South Africa really be able to sustain an equal financial contribution with China? If not, will Beijing continue to be willing to give Pretoria an equal voice in running the institution? And what happens when the combined share of the five founding countries hits the declared floor of 55 percent; will they then stop accepting new members, or will the shares of other existing members be diluted?

Operationally, will the BRICS Bank be able to attract top-tier staff to Shanghai? On what terms will the bank lend? Will there be sound financial, transparency, environmental, and other conditions akin to those applied by multilateral banks such as the World Bank and ADB? Will lending be tied to procurement of goods and services from founding-member companies, or will bidding be open to all?

Similar governance and operational questions surround China's AIIB proposal. Indeed, Beijing should be taking an especially hard look at the costs and benefits of these new institutional arrangements. For all the understandable complaints about the existing order, that order has served China's interests well over the past several decades. It has provided open, growing markets for Chinese exports; access to capital, resources, and technology; and discipline as China has forged ahead with its own domestic economic reforms. Some day in the future when Beijing is sitting in the big chair with the gavel, it may rue the day when it agreed to underwrite expensive new institutions with weak governance and lending structures.

Meanwhile, the BRICS Bank is a wake-up call to the advanced countries of North America, Europe, and East Asia. They should strengthen their own economic management to avoid recurring financial and fiscal crises and do more to share power in the Bretton Woods institutions - notably by persuading the US Congress to enact the IMF quota reforms that the Obama administration championed in 2010. Having made a real concession by embracing the G-20, which includes the BRICS as equal members, as the "premier forum for our international economic cooperation," Western powers should work harder to restore the G-20's effectiveness and credibility. But at the same time, advanced countries should remind the BRICS that the existing rules-based multilateral order has served them all well in substantive terms and is worth preserving and building upon.

Matthew P. Goodman holds the William E. Simon Chair in Political Economy at the Center for Strategic and International Studies in Washington, DC. This article originally appeared on Aug. 6th as part of the CSIS Commentary series and in CSIS: PACNET Newsletter here.