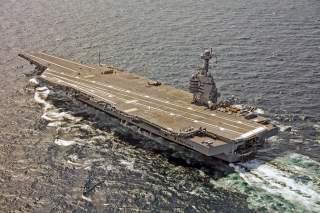 With North Korea’s recent intercontinental ballistic missile test, there is the possibility that policymakers in Washington, D.C., might consider military action against Kim Jon-un’s regime in Pyongyang.

While President Donald Trump has stated in the past that he will not tolerate a nuclear-armed North Korea that possesses an ICBM that would be able to strike directly at the United States, the administration has been sending mixed messages in recent days.

Assuming Trump himself is serious about stopping North Korea from possessing a nuclear-armed ICBM that can strike the United States directly, there are very few good options available to Washington.

“The options and their consequences are essentially the same as when his father declared in 2003 that it has nuclear weapons.”

Gardner outlined three options that the United States could follow. Options then and now include:

·      Destruction of the immediate threat (at that time Yongbyan nuclear reactor, now its their test/launch site -assuming we see the preps as we have in the past)

·      Regime change (assassination, direct attack) (assumes we can do it and that his replacement will be better)

Gardner noted that the core North Korea problem has not changed over the decades, it has simply become more dangerous.

“What’s interesting is that our options, their consequences, and basic choices have not really changed since this cycle began in 2003,” Gardner said.

While there are options, there are no good offensive measures that the United States could take. “No good offensive ones,” James R. Holmes, professor of strategy at the U.S. Naval War College told The National Interest.

“It is really, really hard to root out an adversary who's dug into mountainous terrain, has mobile launchers, or both. We know the North Korean nuclear complex is dug in, and the objective seems to be to develop mobile ICBM launchers. So it's either ‘both,’ or will be someday if the North Koreans make good on their missile project.​”

Other experts also agreed that there are few offensive measures that could be taken against North Korea that would not have profound consequences for South Korea’s civilian population.

Both Holmes and Gunzinger suggested that there are better defensive military options than offensive ones.

“Defense is somewhat better: we could shoot down future tests,” Holmes said.

“But at that point we'd be at war, and with no clear way of winning other than remaining permanently on sentry duty. The trick for Washington would be how to figure out how to wring political results out of a defensive strategy prosecuted through defensive tactics. Passive defense seldom yields decisive results.”

Additionally, the United States could build up allied air defenses in the region.

The most realistic long-term option is nuclear deterrence.

“We had better think ahead about deterrence,” Holmes said.

“Except for South Africa, an outlier, history has been unkind to efforts to reverse nuclear proliferation. Oh, and I bet the former Soviet republics that disarmed after the Cold War probably regret it -- especially Ukraine. One imagines they would have liked to have a deterrent a few years ago when Russia started making mischief.”

Retired Lt. Gen. Dave Deptula, a former Air Force intelligence chief and F-15 Eagle pilot, said that there are military options available to the United States, but he said that he does not want to share those publicly.

“Bottom line is that there are a variety of ‘good’ military options to deal with North Korea,” Deptula said.

“Unfortunately, I don’t believe in elaborating on them in public as that simply yields insight to North Korea that eases their defense calculus.

Meanwhile, vice chairman of the joint chiefs of staff Air Force Gen. Paul Selva said earlier today that the Pentagon does not believe that Pyongyong has the capability to directly target the continental United States just yet. It takes more than a single test to develop such a capability. Thus, that means the Trump Administration has some breathing room, but as U.S. Army chief of staff Gen. Mark Milley said last week, time is running out.