Cape Matapan: The Defeat That Crushed Mussolini's Dream of a Second Roman Empire 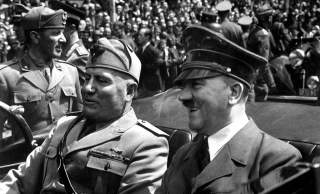 “What’s that battleship over there? I thought ours were miles away,” asked the British officer eating a sandwich on the bridge of the light cruiser HMS Orion.

He was right. The battleship wasn’t British. It was Italian, and promptly began hurling two-ton shells at the little squadron of British ships that had stumbled into its path.

Thus began the Battle of Cape Matapan, which might have given control of the Mediterranean to Hitler and Mussolini—and ended up becoming a crushing defeat for the Italian navy.

In the spring of 1941, Mussolini seemed on the verge of realizing his dream of turning the Mediterranean into an Italian lake, or what the Fascists called mare nostrum (“our sea,” as the Romans termed it). The blue waters of the Med would feed il Duce’s dream of building a second Roman Empire.

The time seemed ripe. France had been conquered by the Germans, and its navy neutralized. Neither America nor Russia was yet in the war. That just left Britain, whose Royal Navy was stretched so terribly thin between fending off German U-boats in the Atlantic, watching for marauding German battleships like the Bismarck, and escorting convoys across the Mediterranean to supply the British forces in Egypt and Malta.

As if that wasn’t enough to crush British spirits, the Balkans fell apart in early 1941. A coup in Yugoslavia overthrew the pro-Axis government, and Greece joined the Allies, which meant Hitler’s panzers would soon be invading southeastern Europe. Churchill felt compelled, for the sake of British prestige, to send troops in a desperate and futile effort to save the Greeks. As always in British history, that meant it was the Royal Navy’s job to safely convoy them.

But sailing to Greece meant passing near Italy, and there lay the danger. Italy was the weakest of the Axis powers. Yet it still had a powerful navy that, unlike the British, was concentrated in the Central Mediterranean. The Italian navy—or Regia Marina—could operate close to Italian ports, and under the cover of numerous land-based aircraft based in mainland Italy and Sicily.

What a great opportunity for the Italian fleet to intercept the convoys, cried the Germans, who were (wrongly) convinced they did all the fighting while the Italians drank wine and flirted with women. Forget about it, replied the Italian high command: Germany hasn’t sent us enough fuel oil for our ships (which Italy couldn’t afford to replace if they were sunk). As historian Walter Ansel put it, “Relations between the partners were far from pure. Teutons were always telling Latins what to do and what they missed doing; Latins were recoiling in resentment against Teuton condescension and criticism. The dominant note was mistrust.”

Like many naval battles, Cape Matapan—named for a point on the Greek coast—was more defined by what went wrong then what went right. The British had broken German and Italian codes and knew the Italians had sailed even before the Regia Marina left port. So the Royal Navy also sortied, with the battleships Barham, Valiant and Warspite, seven light cruisers, seventeen destroyers and—most crucially—the aircraft carrier Formidable. In turn, Italian signals intelligence detected the Formidable, though Italian admiral Angelo Iachino elected to continue the operation.

It was then that the officer on the Orion had his meal interrupted by a battleship’s broadside. The Vittorio Veneto’s shot straddled the British ships fleeing under the cover of a smokescreen, but scored no hits before the Italian fleet turned back toward base.

Adm. Andrew Cunningham, one of the best of Britain’s admirals, realized that his battleships were too far to catch the Italians. But just as would happen to the German battleship Bismarck two months later, aircraft could catch the fastest warship. One after another came eight airstrikes by small numbers of British land- and carrier-based aircraft. Swordfish torpedo bombers from the Formidable finally put a torpedo into the Vittorio Veneto’s propellers, though the ship still steamed at nineteen knots. It was the last strike of the day that was the problem: a Swordfish hit the heavy cruiser Pola with a torpedo that knocked out its boilers and left the ship dead in the water.

What to do? As night fell, Iachino didn’t want to abandon a precious heavy cruiser. Lacking adequate air cover or aerial reconnaissance, he didn’t know the British fleet was so near. He opted to dispatch the heavy cruisers Fiume and Zara, and four destroyers, to tow and escort the Pola to base.

As the British fleet closed the range, several ships detected the Italians on radar—but assumed they were British (the Italians lacked radar for their ships). As historian Vincent O’Hara describes it:

Pola sighted shapes to the north and, believing they were friendly, fired a red flare to advertise her location. Zara, south of Pola, saw the flare forty degrees off her port bow and turned in that direction. The British, meanwhile, closed with Warspite, Valiant, Formidable, and Barham in a line of bearing. All lookouts focused to port, where they expected the enemy ship to appear. One officer on the admiral’s bridge, however, was sweeping the seas to starboard and at 2225 noticed large warships off the bow. Cattaneo was unwittingly crossing the British T.

Cunningham swiftly ordered his three battleships to turn towards the enemy and open fire at a range of just two or three miles. This time, it was the turn of Italian cruisers to face the fifteen-inch guns of battleships—and the British didn’t miss. All three heavy cruisers, as well as two Italian destroyers, were sunk.

Materially, the loss of three heavy cruisers was a disaster for a nation that lacked resources to replace them. Yet Italy could still muster four battleships, which was enough firepower to worry the hard-pressed Royal Navy through 1942. Nor was the defeat unique: the U.S. and Australian navies managed to lose four heavy cruisers in a single night to the Japanese at Savo Island.

However, the psychological devastation of Cape Matapan was immense. The Regia Marina realized that despite operating near Italian airbases, it couldn’t rely on land-based air cover—and it had no aircraft carriers to compensate. Technologically, it lacked radar, which put the Italians at a disadvantage in night combat (though the Japanese did quite well at Guadalcanal using well-trained lookouts).

If Italy’s fleet couldn’t fight the British in open combat, that meant it had to stay in port as a fleet-in-being, always threatening the enemy but rarely venturing forth into battle. It preserved the Regia Marina, but only at the price of allowing the British to operate their convoys and to strike at the Italian convoys supplying Rommel’s army in North Africa.

More than sunken ships, Cape Matapan sunk the dream of Italy’s Mediterranean empire. Mare nostrum was not to be.