Carly Fiorina for President: What You Need to Know 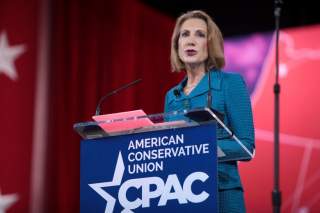 Ten. That’s the number of successive presidents who have come to the White House having previously held elective office. Carly Fiorina hopes to break that string. The former CEO of Hewlett-Packard announced today that she is running for president. If she wins, she would join an elite club. Just six U.S. presidents have won the presidency without first having held some other elective office: George Washington, Zachary Taylor,Ulysses S. Grant, William Howard Taft, Herbert Hoover, and Dwight D. Eisenhower. Of course, if Fiorina wins in November 2016, she would hold another, more obvious distinction. She would be the first woman elected president of the United States. She would also be the first breast cancer survivor to occupy the presidency.

Fiorina announced her bid for the White House in a thoroughly twenty-first century way: she changed her Facebook profile to read, “Carly for President.” She followed that up with a tweet declaring her candidacy.

Fiona has run for public office once before. She challenged California’s incumbent DemocraticSenator Barbara Boxer back in 2010. Fiorina lost, and it wasn’t close.

Fiorina says she is the best GOP candidate to oppose Hillary Clinton because she can prevent the former secretary of state from “play[ing] the gender card.” Fiorina knows something about breaking glass ceilings even if she once said that “the glass ceiling doesn’t exist.” She was the first female CEO of Hewlett-Packard—then the eleventh largest company in the United States— and the first woman to run a Fortune 100 company.

Fiorina touts her extensive experience in business rather than government as a strength rather than a weakness. Her critics—and they are by no means all Democrats— take a less generous view of her corporate career. Her tenure at HP was tumultuous, with some critics going as far as to call it “disastrous” and noting that she was fired as CEO. Even if these criticisms overstate things, the Boxer campaign had great success back in 2010 blaming Fiorina for laying off 30,000 workers and shipping good American jobs overseas. That potential vulnerability will not be lost on her rivals if her campaign gains traction.

Fiorina does not have an extensive foreign policy track record, though over the course of her business career and after it she has met plenty of world leaders. She has served on the Defense Business Board, which advises the Pentagon on best business practices , and she has chaired the Central Intelligence Agency’s External Advisory Board (not to be confused with the far more important President’s Intelligence Advisory Board), which provides informal advice to the director of Central Intelligence.

We must unlock the potential of every American. We must fundamentally reform government, and we must restore American leadership in the world.

One of her challenges on the campaign trail will be to convince voters that she has the mettle and the judgment to handle the proverbial 3 AM phone call.

Acting on the old saying that “the best defense is a good offense,” Fiorina has begun going after Secretary Clinton’s presumed strength. She argues that Clinton was an undistinguished secretary of state and has gone as far as to challenge Clinton to “name an accomplishment” from her tenure.

They always say unless we go to war there’s nothing we can do. There’s plenty we can do.

Fiorina argues that the United States should do more to support its allies. She argues that the Obama administration has let down its European allies in the face of Russian aggression:

The Ukrainians have asked for us to arm them. The Baltic States have asked us to defend them. Our own military people have said we need to reinforce the Sixth Fleet. We ought to rebuild our European missile defenses in Poland. President Obama unilaterally and inexplicably pulled those out.

She thinks much the same of U.S. policy in the Middle East:

Our allies have asked us to do very specific things that are wise… King Abdullah (of Jordan), who I have also known for a very long time, has asked us for … bombs and material for support. We haven’t given it to him. The Kurds have asked us to arm them. We haven’t done it. The Egyptians have asked us to share intelligence. We haven’t … There are a whole set of things we could be doing that would send a clear signal we stand with our allies and that we’re going to oppose our adversaries. And we’re sending the opposite signals.

Given that most GOP presidential candidates hold a similar view of Obama’s foreign policy—Rand Paul is the obvious exception—Fiorina isn’t likely to be challenged to explain exactly what doing more means. Or why it will lead to better results rather than just different, and perhaps bigger, problems. Expect that to change if she wins the nomination.

Like most of her GOP rivals, Fiorina opposes the emerging nuclear deal with Iran, arguing that President Obama could, and should, be getting bigger concessions from Tehran:

I’ve never negotiated a nuclear deal, but I’ve negotiated plenty of deals, big deals, and when you want a good deal you have to be willing to walk away from the table.

Fiorina allows for the possibility that human activity is causing climate change. She opposes federal and state initiatives to rein in the emission of heat-trapping gases on the grounds that action by any single government won’t make a difference. She hasn’t offered up a plan, though, to secure multilateral cooperation to reduce emissions, saying that the Chinese are not going to “follow our lead.” So Fiorina favors innovation as the best way to deal with climate change.

For more about Fiorina, check out her autobiography, Tough Choices (written seven years before Clinton’s similarly named Hard Choices). National Journal, Politico, and theWall Street Journal have all profiled Fiorina. The New York Times has a briefer on where Fiorina stands on the issues. Politico asks if Fiorina is out of touch with corporate America.

Rachael Kauss assisted in the preparation of this post.