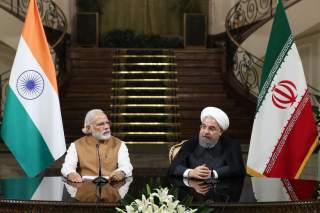 Over the last decade or so we have seen a race to build ports in the Indian Ocean as China, India and others compete to secure their influence in the region. Indian Prime Minister Narendra Modi's visit to Tehran last week included signing a deal for India to build a new port in the Iranian city of Chabahar as part of a major new transport corridor to Central Asia.

This project could have major strategic consequences for the region.

Navalists often like to remind us that the Indian Ocean carries a large proportion of the world's trade, and much of its trade in energy, but that it has only a handful of narrow entry and exit points (such as the Strait of Hormuz) through which trade must pass. This geography drives competition for control over those choke points and the sea lanes between. But there is also another geographic oddity driving strategic competition in the region: the virtual absence of major transport connections between the ocean and the continental hinterland. China, Russia and other hinterland states are virtually cut off from the Indian Ocean by mountain ranges, jungles and deserts.

But this is now changing. Since the turn of this century, China has moved to develop a string of new ports across southern Asia. Some of these are intended to facilitate Chinese maritime trade across the Indian Ocean, but others are oceanic terminals for big new north-south transport links between central Eurasia and the ocean. These links include new road and rail corridors being built from China to the sea across Myanmar (to the port of Kyaukpyu) and Pakistan (to ports at Karachi and Gwadar). Other countries such as Japan and India have also stepped up their own plans to develop ports and transport links.

The Chabahar project involves the construction and operation of new port facilities by India, the creation of special economic zones and the development of road and rail connections through Iran to Afghanistan and further into Central Asia. These links are intended to be part of a new International North-South Transportation Corridor (INSTC) between the Indian Ocean and the Eurasian interior. The deal has been under negotiation for years, but has been slowed by bureaucratic inertia (India), hardball negotiating tactics (Iran) and international sanctions.

The project is strategically significant for India, Iran and the whole region for four reasons.

1. Chabahar's location, around 500 km east of the Strait of Hormuz, makes it an attractive prize for any country that wants to protect its energy imports through Hormuz from the Persian Gulf. Although there is no indication yet that the Indian Navy has any rights to use Chabahar port, the deal certainly creates the possibility. India would be keen to have that option in its pocket, particularly if China establishes a significant naval presence at the Pakistani port of Gwadar, some 150 km by sea further east.

2. The new link will give India direct physical access to Afghanistan. Delhi and Kabul are strategic partners of sorts, with common interests in avoiding the domination of Afghanistan by Pakistan. Currently, India's only overland route to Afghanistan is via Pakistan, which does its best to block Indian access to that country. India aims to use the new link to develop its economic connections with Afghanistan and its political influence there. The new route might also be available for the US to bypass Pakistan, a reason why Washington quietly supports the deal.

3. The project could be an important step in a broader strategic relationship between India and Iran. Some see the two countries as natural strategic partners, and indeed there have been several attempts over the last 40 years to develop a closer strategic relationship between them. India is not currently a serious security player in the Persian Gulf and there are some serious constraints on its ability to develop close strategic relations with most Gulf Arab states. Handled correctly, a partnership with Iran could significantly raise India's strategic value in the Gulf. The potential for substantial security cooperation between India and Iran would also cause severe heartburn in Islamabad – forcing Pakistan to pay much closer attention to its western border and its unstable Baluchistan province.

4. Last and not least, the project will provide Iran with a modern port directly on the Indian Ocean. During the 1970s, Iran had grand plans to become a major Indian Ocean power, including seeking naval bases or access throughout the region (as far away as Mauritius and the Maldives). Those ambitions disappeared with the fall of the Shah and now seem very far away. But we should nevertheless expect Iran to become increasingly active in Indian Ocean affairs in the coming years, and the development of Chabahar might be a significant step in Iran developing a broader strategic outlook.

But with all this said, there are several mountains to cross before the new port and transport links are operating. The Gulf region is in a state of strategic flux and it is difficult to predict Iran's strategic trajectory, including its relationship with India. Competitors such as China and Pakistan could obstruct or otherwise trump India's involvement in the project. India also has a long history of failing to exploit strategic opportunities open to it. Nevertheless, the Chabahar project could be a big step in India's regional role and alter the strategic dynamics of West and Central Asia.