Chemical Weapons Mystery: Did Assad Attack with Chlorine (and Sarin)? 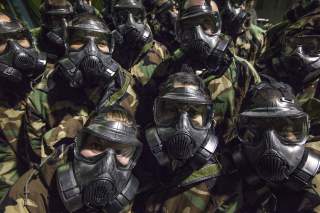 On April 7, images and video footage of dozens of dead Syrian children and adults foaming at the mouths, or injured and struggling to breathe, once again began circulating around the world. The latest chemical-weapon attack, targeting the rebel-held suburb of Douma east of Damascus, reportedly caused at least forty-two deaths and injured five hundred, though some sources claim seventy deaths or more.

The Violations Documentation Center, a human-rights monitoring group, has published a timeline of the events on April 7, beginning at noon with a guided-missile strike and barrel-bomb attack on a Red Crescent center in Douma, which destroyed its last remaining ambulances. Then at 4 p.m., an air attack apparently delivered the first chemical strike in the vicinity of the Saada Bakery. Bakeries have been popular targets for Russian and Syrian government warplanes, as they assure the food supply of civilians in rebel-held areas.

The attack apparently caused fifteen to twenty-five deaths, particularly among families in enclosed spaces (bomb shelters or basements) who passed out or died from suffocation as heavier-than-air gases accumulated there. One extremely graphic and disturbing video depicts the huddled corpses of entire families, including several babies, dead with foam pouring out of their mouths and noses.

A second strike landed at 7:30 p.m. around Martyr’s Square, killing an estimated twenty more and resulting in five hundred more patients being brought to a local medical center. Some rescuers attempting to aid survivors also suffered breathing difficulties. You can see slightly less graphic footage of a local clinic being overwhelmed by patients, including young children, here.

Victims of the attack reportedly reeked of chlorine. Two Syrian government Mi-8 “Hip” transport helicopters were reported by an aviation-monitoring group operating over the area around the time of the attack. Mi-8s have previously been observed dropping chlorine canisters on rebel targets, which release greenish-yellow gas on impact.

Additionally, two yellow canisters used to deploy chlorine gas were recorded by multiple sources at the site of the attack in Douma; you can see one of them in this video. Some of the civilian casualties and the two canisters have been geolocated in an investigative report by Bellingcat. The open-source investigation site argues that these support evidence of a chlorine attack.

However, there is good reason to suspect that chlorine was not the only chemical agent deployed in Douma on April 7.

Chlorine gas was the first lethal chemical weapon to see wide-scale use on the modern battlefield, when German forces deployed gas projectors against French colonial troops in the Second Battle of Ypres during World War I. The weaponization of chlorine was carried out at the suggestion of future Nobel Prize–winning chemist Fritz Haber; shortly after the battle, Haber’s pacifist wife, Clara Immerwahr, commited suicide in apparent protest.

The gas irritates the lungs and causes the mucous membranes to fill with liquid, making breathing difficult and potentially leading to suffocation. The chlorine also mixes with water in the eyes and lungs to form hydrochloric acid, potentially causing blindness and permanent lung damage.

However, chlorine gas generally harms far more people than it kills because it requires comparatively high concentrations (nineteen thousand milligrams per cubic meter) and prolonged exposure to achieve lethal effect, usually conditions that prey on immobilized victims (sleeping or injured), or those on lower ground and enclosed spaces. Children and the elderly are likewise more susceptible than adults.

In World War I, all sides rapidly deployed countermeasures such as gas masks against chlorine gas, and moved on to deadlier chemical weapons. Nerve agents, first developed by the Nazis during World War II, are dramatically more lethal than chlorine; just thirty-five milligrams of sarin per cubic meter will kill. It is estimated over a thousand Syrians were killed in a single sarin gas attack on Ghouta in 2013.

Since 2012, Syrian military helicopters have “systematically and repeatedly” (according to the Organization for Prohibition of Chemical Weapons) dropped chlorine gas on rebel-held towns and urban neighborhoods; more than two dozen attacks have been recorded. These attacks continued even after Syria supposedly disposed of its chemical-weapons stocks to avoid international retribution for the Ghouta sarin attack as part of a deal brokered by Russia.

The chlorine gas attacks also continued through 2017 and early 2018, even after the United States launched a missile strike on Syria as punishment for its deployment of air-dropped nerve agents on the rebel-held town of Khan Sheikhoun, which killed around seventy.

These attacks are an indiscriminate terror tactic directed more at the civilian population than armed fighters, intended to make daily life in rebel-held communities as intolerable as possible so as to provoke an exodus to government-controlled territory. ISIS has also deployed chlorine and mustard gas (a blistering agent) in Iraq and Syria, and a Syrian rebel group has been implicated in a chlorine attack on a Kurdish community.

However, the chlorine raids received relatively little international censure, because chlorine is a common industrial chemical with many useful applications that can’t be plausibly regulated, and because, unlike nerve agents or phosgene gas, chlorine gas has a comparatively low fatality rate. For example, a helicopter-delivered chlorine bombing in Zubdiya in eastern Aleppo on August 10, 2016, injured around seventy (including forty children) and killed four (including a mother and her two babies). In numerous other chlorine attacks, dozens have been injured, but deaths have numbered “only” in the single digits or even zero.

What Happened in Douma?

The high number of fatalities in the Douma attack may suggest that a chemical agent besides chlorine was employed as well. While both sarin and chlorine cause breathing problems, symptoms exhibited by some of the victims of the Douma attack—convulsions, foaming at the mouth, dilated pupils—have led doctors to suggest that sarin or some other nerve agent was employed in tandem with the chlorine. Conveniently, sarin has no smell.

One possibility is that the chlorine gas was intended to mask the employment of a nerve agent, which, unlike chlorine, is considered a weapon of mass destruction. Alternately, the weapons could have been released together to increase the harmful effects of the attack; for example, Saddam Hussein deployed both mustard gas (a blistering agent) and nerve gases (sarin and tabun) in a 1988 attack on the Kurdish village of Halabja, which killed between three and five thousand.

The day after the chemical attack, the rebels in Douma surrendered and the area fell under control of the Syrian government. Subsequently, Russia claimed its forces investigating the site found no sign of a chemical attack. Moscow and Damascus insist that the rebels staged or faked the attack—a claim the two allies have steadfastly made regarding incident upon incident; if they are to believed, civilians in rebel-held territory are constantly staging attacks upon themselves to gain international sympathy. Or else, Russian officials seem to imply that the dead and injured contorted in agony in the videos are actors.

Perhaps such claims seem plausible to Moscow because its own propaganda machine has employed actors, and used production stills from war movies and screenshots from video games, in media reports claiming to depict real-world atrocities. But these ploys are less convincing than the dozens of shaky videos coming out of Syria.

In the place of this disingenuous theater of denial, a more honest discussion might begin with the cruel fact that relentless bombardment by conventional artillery and air-dropped bombs are daily killing more Syrian civilians than chemical weapons. One image that will linger is a photograph (too gruesome to link to here) of the aftermath in a school playground in Ghouta after it was struck by a Nerpa cluster munition fired by a Syrian Army 240-millimeter mortar, the largest weapon of its type in active service, while the students were lining up for class.

Taken together, some may question why hundreds of thousands of civilian deaths due to “conventional” weapons are deemed less morally dubious than those killed in chemical attacks.

A second consideration is that, as a result of Iranian and Russian military support, the Assad regime is close to defeating its most determined foes in the Syrian opposition, as evidenced by its capture of Douma just twenty-four hours after the chemical attack on April 7. The only major remaining rebel-held territory is in besieged Idlib Province. While Assad’s government also does not control large territories in the north and east held by Kurdish, Turkish-allied and ISIS forces, these groups do not pose an existential threat to Assad. Thus, it is hard to envision a scenario where Assad’s hold on power would be truly threatened by all but the largest-scale intervention.