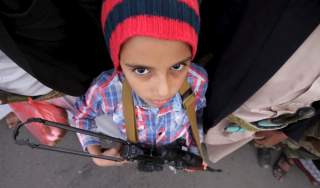 The United States military is finding itself on the ground-conflict zones across the globe, including in Syria, Iraq, Afghanistan and Nigeria. As the United States expands its footprint around the world, U.S. soldiers may increasingly come into contact with child soldiers. Although this is not a new challenge, governments continue to struggle to stop the use of child soldiers in some of the world’s most brutal conflicts, and to address the operational and long-term effects arising from engagement with children in armed conflict.

Tens of thousands of children continue to be used in conflicts around the world, with many used as child soldiers or in combat-support roles. Indeed, a brief snapshot of the numbers tells a grim story. In South Sudan, the United Nations estimates that more than nineteen thousand children have been used as child soldiers in the country’s civil war since 2013. More than two thousand children have been recruited by Boko Haram in Nigeria in 2016 alone and they have been increasingly used as “human bombs.” In Yemen, the UN has documented more than 1,700 children who have been recruited since March 2015 to fight in the ongoing civil war.

For years, this issue has prompted numerous calls for pragmatic approaches to mitigate and ultimately prevent the future use of child soldiers. Yet many efforts, particularly those aimed at modifying national policies and implementing legislation, are stymied at the start because the recruitment and use of child soldiers is viewed narrowly as a human-rights concern, rather than an issue that holds both human security and national-security implications. These two things are not mutually exclusive.

With sustained conflicts and the continued use of children to wage wars, it is time to reframe the discussion on child soldiers and better emphasize the security challenges presented by the exploitation of children in conflict—both for the conflicts’ duration and the long-term impacts of those that come into contact with child soldiers.

The recruitment and use of child soldiers are not crimes of desperation or opportunity, but represent a deliberate strategic process to sustain conflict. Child soldiers are often seen as expendable and replenishable, and do not require significant training or investment. And although children in conflict are unlikely to change the tempo of warfare or provide significant strategic advantage to one side or another, they can sustain conflict and fulfill much-needed positions such as porters, spies, cooks and combatants—thus extending the length and lethality of conflicts and sustaining conditions that perpetuate the conflict’s continuation. It is therefore important to frame policy discussions to attend to the perceived strategic incentives (and disincentives) of using children in conflict, and identify effective ways to ultimately end the recruitment and use of child soldiers.

To combat the reliance on children as tools of warfare, governments can train military leaders on the risks and inefficiencies of relying on children to fight their wars. The Dallaire Child Soldiers Initiative, run by former Canadian Lt. Gen. Roméo Dallaire, who served as the force commander for the UN Mission in Rwanda during the 1994 genocide, has taken such an approach to eradicate the use of child soldiers. The initiative works with governments to implement trainings that educate military leaders on the dangers and pitfalls of using child soldiers, as well as inform them of the international legal frameworks that protect children from exploitation in armed conflict. The initiative also aims to adapt military doctrine to better help national armed forces prepare for the possibility of confronting children in combat. In March 2017, Canada became the first country to adopt such a doctrine.

Governments can also leverage military assistance to dissuade foreign militaries from recruiting and using children in combat. To date, very few countries have linked these issues and implemented national legislation that conditions arms sales and military assistance on a country’s record of using or supporting the use of child soldiers. Such initiatives have been undertaken by Belgium, Switzerland and the United States to augment broader efforts to get children off the battlefield. Although the conversation on child soldiers often falls off national-security agendas—or to a lower-tier priority—there are numerous opportunities to enhance efforts to prevent and ultimately end the recruitment and use of children in combat.

In the United States, one such effort is the Child Soldiers Prevention Act (CSPA), which seeks to encourage countries to stop recruiting and using child soldiers by leveraging U.S. security assistance. Under the CSPA, countries identified by the State Department as using or supporting the use of child soldiers are prohibited from receiving U.S. weapons and certain types of military assistance, unless they receive a waiver from the president. The United States has invoked such national-interest waivers more often than not, however, and allowed nearly $1.7 billion in military assistance to flow to thirteen countries known to use/support the use of child soldiers since the CSPA was enacted—thereby effectively giving a pass to governments that routinely exploit children in their national militaries or government-supported armed groups.

What is needed, then, is not only broader application and implementation of the CSPA, but also potential reframing of the broader issues surrounding the recruitment and use of child soldiers so as to better prepare U.S. military personnel for situations in which they may encounter children in combat roles. This includes awareness raising in advance of operations that may encounter child soldiers, as well as post-deployment counseling to deal with the aftermath of engagement with children in conflict.

The United States could also adopt bureaucratic changes to address the use of child soldiers. While the United States is not Canada, and it plays a different role in military operations around the world, an adapted Canada doctrine may be appropriate for the U.S. military. Regardless, the United States needs to expand the range of stakeholders engaged in these discussions and incorporate the issue into engagement and operation planning to deal with the situation of encountering child soldiers on the ground and better address the psychological aftermath of military engagement with young children.

Further, the United States can work with other countries, particularly those that are military-assistance donors, to establish additional protections for children in conflict. This can mean working with governments to implement their own legislation to condition their military relationships on stopping the use of child soldiers. Such an approach can also include awareness of—and support for—groups and organizations working on child soldier reintegration and prevention so that the most vulnerable children are protected from re-recruitment.

The United States and other governments must recognize that the issue of child soldiers is a security concern—not just a moral and ethical dilemma. Changing the way that governments and militaries talk about the issue of child soldiers will allow a wider variety of actors to engage in more creative and effective solutions that could put a stop to this horrific practice while protecting national-security interests.

Rachel Stohl is managing director and directs the Conventional Defense program at the nonpartisan Stimson Center. Shannon Dick is a research associate with Stimson.

Image: A boy, who is a follower of the Houthi movement, carries his weapon during a protest against the Saudi-led air strikes in Sanaa April 10, 2015. REUTERS/Mohamed al-Sayaghi