China and America: Dancing Around the Containment Question 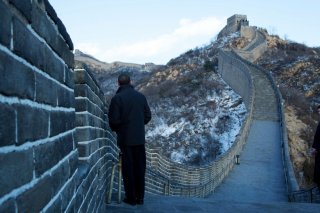 Earlier this year Secretary of State Kerry visited Beijing where he explained that Washington welcomed China's peaceful rise and has no intention to contain Beijing.

Joint Chiefs Chairman Dempsey repeated the theme at the annual meeting of Asian defense ministers in Shangri-La emphasized that recent American moves in the region are not in any way intended to offset or contain China.

Hagel repeated the mantra during his visit to Shangri-La as well:  “This was not a visit to contain China. The rebalance to Asia-Pacific was not a contain China strategy. President Obama has made that point very clear. Secretary Kerry has.  I have.”

Despite Washington’s insistent and coordinated protestation, China’s leaders are not buying it.  As Dempsey put it, “Frankly, I think the Chinese have a different view of that, and I acknowledge that.”  Beijing’s perception derives from a number of different factors.

Washington’s Asia re-focus started in the last two years of the Bush administration and was accelerated and declared as a pivot/rebalancing under Obama. The cumulative effect of its multiple elements over the past eight years undermines America’s not-containing-China assurances.

Components of the strategy include:

--Augmentation of US ground, naval, air, missile defense, and reconnaissance assets in the region;

--Military hardware and technology transfers to both sets of states;

--Encouragement of enhanced security roles by individual states and establishment of bilateral, trilateral, and multilateral security arrangements between and among regional states and with the US.

--Most importantly, America has effectively drawn its own red line in Asia, declaring core US interests in a rules-based regional and international order, peaceful resolution of disputes, and freedom of navigation and over flight.

At each phase of the evolving rebalancing, Washington has strived to mollify Chinese concerns that it is pursuing a China containment policy rather than serving some broader purpose peaceful purpose—unwisely conceding the rhetorical point that the former is separate from, and inconsistent with, the latter.

As the president said in Manila,“Our goal is not to contain China. Our goal is to make sure international rules and norms are respected and that includes in the area of international disputes.”

For years, US officials danced around the dragon in the room, avoiding mention of the powerful state that is violating those rules and norms and posing the second-most serious threat to Asian peace and security after North Korea, China’s dependent ally.  That has finally begun to change.  In recent months they have explicitly called out China for its challenges to the international order.

Going beyond the aspirational euphemisms about welcoming a “strong, prosperous, and peaceful China,” administration officials are more transparent in acknowledging that that is not the China we presently have.  They now sporadically accuse Beijing of acting “provocatively” and “aggressively” even as they continue to pursue the strategy that dares not speak its name.

It is past time for China’s leaders to cease exploiting the century of humiliation. Four modern decades of Western engagement, economic and technical aid, trade, and investment—hardly containment—have helped China achieve its economic success, as well as, perversely, its military power now threatening the region.

Employing its own evasive circumlocutions, Beijing adamantly insists that its territorial and military intentions are entirely normal and purely peaceful.  US officials need to tell their Chinese counterparts in the security realm we will stop not-containing China when they stop not-trying to push the US out of Asia and not-pursuing regional hegemony.

Joseph A. Bosco is a senior associate at the Center for Strategic and International Studies. He served as China country desk officer in the Office of the Secretary of Defense and taught a graduate seminar on US-China-Taiwan relations at Georgetown's School of Foreign Service.