China and America: Raising the Bar on Climate Change 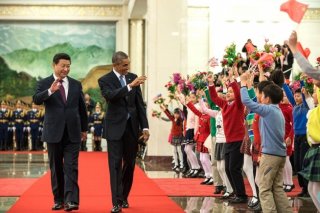 It’s official: the United States and China have reached a mutual agreement on global warming. President Obama and Chinese President Xi Jinping together pledged to take significant steps to reduce their respective countries’ contribution to climate change.  The U.S. agreed to deepen emissions reductions from 17% to 26-28% over 2005 levels by 2025, while China pledged to peak its carbon dioxide emissions by 2030.  Although the agreement was expected, the announcement represents a landmark achievement that promises to transcend the divide between developed and developing countries that has long hamstrung global climate negotiations.  Moreover, the announcement contains a number of creative initiatives that can help deepen U.S.-China cooperation to address climate change.  But neither side can be complacent. To realize the promise of this week’s accord, Washington must strengthen engagement with other major economies, and ensure that measures are in place to make Beijing’s commitments credible.

What makes this week’s agreement so important is that it represents the first time that a major developed country and a large developing country have mutually committed to limiting or reducing carbon dioxide emissions, the principal cause of climate change.  It also effectively buries the hatchet between the United States and China over the climate issue – in 1997, Washington withdrew from negotiations over the Kyoto Protocol, the world’s only binding international agreement to limit carbon emissions, citing China’s refusal to limit its own emissions.  Subsequently, American inaction gave China and other large developing countries a convenient excuse to avoid making commitments on climate change.  With Obama and Xi’s agreement, this Sino-American deadlock has been broken.  But now comes the hard part – Washington must translate this bilateral achievement into a new multilateral agreement to replace the Kyoto Protocol, currently scheduled to expire in 2020.

In order to build on this momentum, both the United States and China must engage other large economies in order to ensure a new agreement covers all major sources of climate change.  Among these, India is a crucial player.  Its emissions are increasing rapidly, and are expected to surpass those of the European Union by 2019.  Despite this, India has long resisted even discussion of limiting its emissions, claiming, and not without reason, that poverty reduction and expanding access to energy must come first.  But China’s agreement to limit its own emissions denies New Delhi its most convenient source of political cover, and puts its own climate policy in the spotlight.  The United States and China should leverage their recent announcement to press India to act aggressively on climate change, and help to conclude a new global climate treaty over the next year.

At the same time that Washington should leverage its agreement with Beijing, it must also ensure that China builds the capacity to make its commitments credible.  Keeping track of emissions, referred to as measurement, reporting, and verification (MRV) is challenging for all large economies, but China has a patchy track record in this area.  Several years ago, a massive, long-running scam was uncovered in which Chinese factories deliberately increased emissions of greenhouse gases, and then charged foreign firms to reduce them under an emissions-offset program.  Other countries will be hesitant to new emissions commitments unless they can be assured such incidents won’t be repeated by others.  Accordingly, the United States must continue to work with China to increase its capacity to accurately track and certify its greenhouse gas emissions.

Indeed, although news headlines focused on emissions targets, the fine print of the U.S. – China joint announcement offers the greatest promise for this kind of strengthened cooperation on climate change. Other areas covered by the agreement include new partnerships linking water scarcity and sustainable energy, a demonstration project for carbon capture and storage (CCS), and a sustainable cities initiative. Integrating energy and water issues promises to expand U.S. – China climate cooperation from an almost exclusive focus on emissions mitigation to one that also helps both countries adapt to climate change. Greater cooperation on CCS, meanwhile, will help develop a technology that is needed to help wean the world off fossil fuels by storing carbon dioxide deep underground instead of releasing it into the atmosphere.  The sustainable cities initiative, finally, builds on dynamic sub-national action on climate change in both the United States and China, with the leaders of places as diverse as New York and Jiangsu Province pledging to work together to reduce emissions.  Washington must devote serious resources to ensure that these initiatives fulfill their promise.

This week’s agreement is the most hopeful sign in years for global efforts to address climate change.  But standing before the cameras was the easy part.  Having set the bar a bit higher, Washington and Beijing must now lead the rest of the world over it.