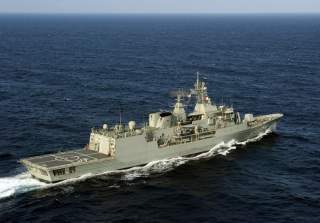 As the ‘war of words’ between China and the U.S. in the South China Sea escalates, questions arise as to exactly what are Australia’s interests in this contested maritime zone. Bonnie Glaser has recently claimed that approximately 60 per cent of Australia’s seaborne trade passes through the South China Sea, and Peter Jennings has suggested that Australia should join the U.S. in conducting freedom of navigation (FON) operations in the area .

These appreciations raise issues about the importance of this region to Australia, economically, politically and strategically. We need to have answers to these questions before determining our future actions.

When measured by value, the figure of 60% of our seaborne trade passing through the South China Sea is way off the mark. Based on the latest data for Australia’s overseas trade, it mightn’t even be half that—and about three-quarters of it would be trade to and from China. Thus the notion of a threat to our seaborne trade from China is rather a non-sequitur.

Our overseas trade crossing the South China Sea includes that with China (with a total of 23.9 per cent of our two-way overseas trade), Thailand (2.8%), Taiwan (1.9%), Vietnam (1.4%) and Hong Kong (1.2%). And even these figures overstate our dependence on the South China Sea, as it’s only trade with southern China that crosses the sea. These figures are based on overseas trade by value. Trade by volume could provide a different result recognizing the high volume of our exports (coal, iron ore, LNG, and other minerals) carried by sea, but it would still be nothing like 60%.

Politically, we have two treaty arrangements that could involve us in the South China Sea. The first and the one receiving most attention is the U.S. alliance, which could lead to Australia bolstering U.S. efforts to counter China in the area. However, Canberra has denied that it agreed to U.S. military plans to rotate B-1 strategic bombers and surveillance aircraft through Australia as part of efforts to deter Chinese regional ambitions.

The Five Power Defense Arrangement (FPDA) is the second treaty that could see us become involved in the South China Sea. Malaysia and Singapore, our regional partners in FPDA, are both littoral to the sea, but while Malaysia is a claimant to several island features, both countries have been relatively mild in their anti-China rhetoric. Also, Singapore recently concluded a four-day bilateral naval exercise with China.

Strategically, freedom of navigation is an important interest for Australia, particularly through the archipelagos to our north, but as I cautioned in an earlier post , it would be unwise of Australia to become associated with the currently unilateral, and legally questionable, assertions by the U.S. Such an involvement would do nothing for our image as an independent player in the region.

Australia has a clear strategic interest in the situation in the South China Sea not deteriorating further. However, the situation there is messy, and we should have our eye on our broader regional relations. As Peter Drysdale recently pointed out Asia takes Australia seriously as a “crucial element in Asia’s security in terms of strategic resource and energy supply.” That’s where the bigger picture and our interests in the South China Sea lie. The sea itself isn’t that important to Australia. Rather, it’s our broader regional role.

Rather than contemplating direct involvement, Australia should be using our good offices to play a role in de-escalating the situation in the South China Sea. We should be concerned about regional naval capabilities expanding in ways which, as Richard Bitzinger has suggested, will render future conflict in the region “faster, more intense, and more lethal, and therefore perhaps more devastating.” Like Singapore’s Naval Chief, we should also be concerned about the risks of submarine proliferation in the region.

The overall objective of all stakeholders in regional stability should be to de-militarize the South China Sea to reduce the risks of an unfortunate incident. We could help by expressing our concern to China about using its reclaimed islands for military purposes, and to the U.S. about an overly aggressive military response to China.

We might also promote the notion of an operational and strategic level agreement to cover issues such as safety zones around disputed features, restrictions on particular types of operation in particular areas, such as submarine ‘no go’ areas (or even not to conduct FON operations in disputed waters), hot lines, operational transparency, and prior notices of operations.

All this might sound idealistic, but it’s what would best serve our national interest.