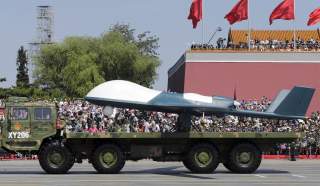 China appears to have secretly sold Pakistan a large combat drone, according to new satellite images.

This was first pointed out by the Center for the Study of the Drone at Bard College. Citing satellite images from November 2017, the Center reported on January 5th that there was a medium-altitude long-endurance drone spotted at the Alam Air Base in Mianwali, Pakistan. “The drone in the image appears to be a Wing Loong I. This assessment is based on its wingspan—which we believe to be around 14 meters— and its V-tail, as well as a comparison with other satellite images of the Wing Loong I elsewhere in the world,” the Center noted in its report. The report was later confirmed by IHS Jane’s, which cited different satellite images taken from the same time.

The Wing Loong I is a strike-capable medium-altitude long-endurance drone built by the Chinese firm Aviation Industry Corporation of China (AVIC). It has a length of nine meters and a wingspan of fourteen meters. It can fly at heights of nearly 25,000 feet with a maximum speed of around 280 km/h and a range of 5,000 kilometers. According to IHS Jane's, it has a maximum take-off weight of 1,150 kilograms with a maximum payload capacity of 200 kg. The payload is split fifty-fifty between internal and external weapon stores. It is considered to be China’s version of America’s Predator drone.

The drone in Pakistan appears to have been deployed for testing purposes. As the Center for the Study of the Drone’s analysis pointed out: “No drones or supporting equipment are visible in earlier satellite images of the base, suggesting that this drone may have arrived at Alam Air Base sometime in late November. The fact that there is no evidence of additional drones at the base, along with the fact that it is painted white—not the battlefield gray like other, deployed Wing Loong drones—might suggest that it is a test platform, not an operational airframe.” If so, this is probably not the first time that the Pakistan Air Force has been testing the Wing Loong I. In June 2016, a drone that appeared to be the Wing Loong I crashed near Alam Air Base apparently during a test run.

Pakistan has been operating armed drones for a number of years now, likely with the assistance of China. Islamabad first acknowledged its strike drones in 2013, when the military released a statement saying it had developed two drones that it referred to as the Burraq and the Shahpar. Foreign experts immediately cast doubt on Pakistan’s ability to indigenously produce armed drones. For instance, Pieter Wezeman, a senior researcher at the Stockholm International Peace Research Institute (SIPRI), told the Financial Times: “Developing a drone with armed capability is much more difficult than just a reconnaissance one because the reconnaissance one can be built with very basic technology, but integrating weapons is a different level.” He added: “Either it is a Chinese UAV or based on Chinese technology.”

Indeed both the Shapar and the Burraq look a lot like the Chinese CH-3 UAV despite Pakistan’s claim that they were built by the local firms Global Industrial & Defence Solutions (GIDS) and National Engineering and Scientific Commission (NESCOM). Neil Gibson, an analyst at IHS Jane's, told FT that a "close analysis of the imagery released by Pakistan suggests at least a heavy debt to Chinese systems.” Regardless of their origin, Pakistan began using the UAVs to carry out strikes against militant groups located in the country's tribal areas in 2015.

Still deploying the Wing Loong I would be a significant upgrade over Pakistan’s current drone force. As the Center for the Study of the Drone noted in its analysis: “The acquisition of a heavier multi-role drone like the Wing Loong I would allow Pakistan to carry out longer and more complex missions than it can with its current fleet of unmanned systems.” It is quite possibly, however, that Islamabad ultimately opts for an “indigenous” drone that looks remarkably similar to the Wing Loong I. Indeed, in July 2017, Pakistan’s air force announced that it was developing a domestically built fifth-generation fighter, medium altitude long-endurance (MALE) unmanned aerial vehicle (UAV) and munitions under a new program it called Project Azm. While Pakistan’s weapon designers work on building up this fleet—likely with the assistance of China, of course—Islamabad could be training its forces in operating the systems by relying on the prototype Wing Loong I seen in the satellite images.

For it’s part, China has quickly become a major drone exporter especially for nations that do not have access to American drones. Along with China’s own military and Pakistan, Beijing has exported the Wing Loong I to Kazakhstan, Saudi Arabia and the United Arab Emirates. Last year it also announced its largest drone sale ever to a country it refused to disclose. That sale was of the more advanced Wing Loong II.