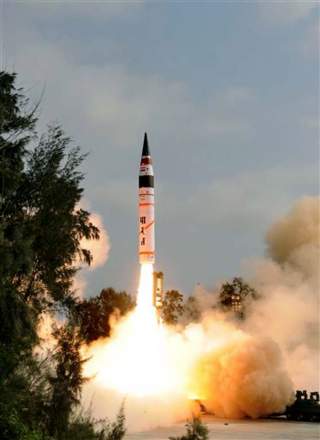 As expected, India conducted the first canister test launch of its Agni-V nuclear-capable ballistic missile on Wheeler's Island in the Bay of Bengal. The test was a complete success, the government said in a press release.

The Agni-V is a three-stage solid-fueled intermediate-range ballistic missile (IRBM) with a range of about 5,000 km while carrying a 1.1 ton payload. When inducted into India’s Strategic Forces Command, it will give India the ability to threaten all of China’s major cities with nuclear weapons, a capability that Delhi currently lacks. China has long boasted ICBMs capable of reaching all of India.

This was the third test of the Agni-V following ones in 2012 and 2013. However, the test on Saturday was the first time that India tested the Agni-V from a mobile launcher mounted on top of a truck. A canister launched missile has greatly survivability and can be launched much more quickly than ones at a fixed launch site.

As the press release explained:

“The earlier two flights of Agni 5… were in open configuration and had already proved the missile. Today’s launch from a canister integrated with a mobile sophisticated launcher, was in its deliverable configuration that enables launch of the missile with a very short preparation time as compared to an open launch. It also has advantages of higher reliability, longer shelf life, less maintenance and enhanced mobility.”

Avinash Chander, the outgoing chief of India’s defense technology agency, the Defence Research and Development Organisation, which designed the Agni-V, underscored the importance of the canister launch. “This is a momentous occasion. It is India’s first ever ICBM launch from a canister and is a giant leap in country’s deterrence capability.” Chander, who left office following the test on Saturday, said that the launch was the “best farewell gift.”

Indian Prime Minister Narendra Modi also praised the successful launch on Twitter. “Successful test-firing of Agni V from a canister makes the missile a prized asset for our forces. I salute our scientists for their efforts,” the Indian leader tweeted.

Indian media outlets reported that DRDO will conduct a few more tests of the Agni-V before it will be officially inducted into India’s Strategic Forces Command.