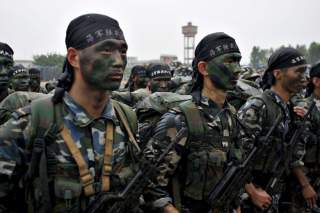 China may be building an army of almost 42,000 unmanned aerial vehicles (UAVs), according to the U.S. Department of Defense.

On Friday, the Pentagon released its annual report to Congress on Chinese military power. The Pentagon’s assessment is that China has incredibly ambitious plans for building up a fleet of both sea and land-based UAVs in the coming years.

“China is advancing its development and employment of UAVs,” the report— entitled Military and Security Developments Involving the People’s Republic of China 2015— said. “Some estimates indicate China plans to produce upwards of 41,800 land- and sea-based unmanned systems, worth about $10.5 billion, between 2014 and 2023.”

This would be an astronomical rate of growth. Indeed, by way of comparison, the Pentagon itself only operates 7,000 aerial drones, according to the Friends Committee on National Legislation, although others have estimated it has more. The estimate of 7,000 drones also doesn’t include underwater UAVs.

The new Pentagon report highlights four Chinese drones in particular— the Xianglong, Yilong, Sky Saber, and Lijian— that were all unveiled in 2013. The Yilong, Sky Saber, and Lijian are all designed to carry carry precision-strike weapons, the report said, and the Lijian is a stealth drone. The Pentagon also noted that China has been incorporating UAVs into military exercises in recent years, including one drill in the East China Sea in 2013. That move irked Japan, which quickly announced that it had plans to shoot down foreign drones.

The new report indicates growing alarm among the U.S. military over China’s UAV arsenal. Indeed, in its 2014 report on Chinese military power, the Pentagon merely stated: “China is incrementally advancing its development and employment of UAVs. Last year’s report also highlighted a 2013 report from the Defense Science Board that said that China’s UAV spending might match or exceed America’s in the future.

Nonetheless, the Pentagon’s assessment is consistent with other non-government reports, which have highlighted China’s burgeoning drone manufacturing capabilities. Back in May 2014, Forecast International, a private market researcher, released a forecast of the global UAV market over the next decade. The report estimated that the Aviation Industry Corporation of China (AVIC), a state-owned Chinese defense company, will lead the world in UAV production. According to Forecast International, AVIC will produce about $5.76 billion worth of UAVs through 2023. That is more than half of the UAVs by value that will be produced during this time period. Most of those UAVs will go to Chinese consumers, the report said, with the largest consumer almost certainly being the Chinese military. China has also expressed an interest in exporting UAVs, including to Saudi Arabia.

The 2015 Pentagon report also continued to express alarm over the scale of the People’s Liberation Army Air Force’s modernization campaign. “The PLA Air Force is rapidly closing the gap with western air forces across a broad spectrum of capabilities from aircraft, C2, to jammers, to electronic warfare (EW), to datalinks,” the report said. Last year’s report used similar language, although it also said that “the PLAAF is pursuing modernization on a scale unprecedented in its history.”