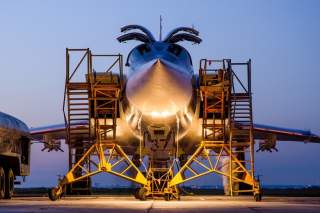 The Chinese People’s Liberation Army Air Force (PLAAF) is working on developing a new long-range strategic bomber, but there are scant details available about the project. Beijing currently relies on the Xian H-6K cruise missile carrier—which is a highly modernized derivative of the 1950s-era Soviet Tupolev Tu-16 Badger—for long-range strike capability, but the aircraft does not have the ability to penetrate enemy airspace nor does it have the range to attack the U.S. mainland.

“We are now developing a new generation of long-range bomber, and you'll see it in the future,” PLAAF chief Gen. Ma Xiaotian said on Sept. 1 at the PLAAF Aviation University in Changchun according to China’s Global Times. But Ma offered no further details about the Chinese bomber project.

The fact that Beijing is developing a new bomber should not come as a surprise. A platform that would be capable of carrying a significant payload over great distances would be very useful over the vast reaches of the Pacific theatre because there are few land bases available. Outside the Chinese mainland, Beijing only has a handful of vulnerable artificial island airstrips from which it could try to project its airpower forward. Thus a new long-range bomber with intercontinental range and a large payload would enable China to threaten U.S. forces at longer ranges.

That could mean using massed bomber formations armed with cruise missiles to attack U.S. carrier strike groups further out to sea than is currently possible with the H-6K—similar to how the Soviet Union planned to attack those vessels using the Tupolev Tu-22M3 Backfire during the Cold War. Alternatively, China could use such an aircraft to strike more distant potential U.S. staging areas such as bases in Hawaii.

Indeed, with sufficient range, payload capability and an appropriate load-out of land-attack cruise missiles, a next-generation Chinese bomber could possibly hold targets within the continental United States at risk. Right now, China has no conventional capability to strike at targets with the continental United States save for cyber-attacks—as the RAND Corporation posited in a recent study. Meanwhile, the United States is unlikely to hold back from strikes against the Chinese mainland in the event of a war.

While there are no details available about the Chinese bomber project, Beijing could opt for long-range subsonic cruise missile carrier similar to the Boeing B-52 or Tu-95 Bear; a long-range supersonic design similar in concept to the Tupolev Tu-160 Blackjack; or some kind of stealth design similar to the Northrop Grumman B-2 Spirit. Given that China has demonstrated some ability to develop stealth aircraft in the guise of the Chengdu J-20 and Shenyang J-31, it is possible that Beijing will opt for a low observable aircraft design.

However, the problem for China is that its industry has not yet mastered developing and producing reliable jet engines. Beijing seems to be aware of this Achilles’ Heel and seems to be intent on rectifying the problem. Indeed, late last month President Xi Jinping established the Aero Engine Corporation of China (AECC) in order to position the rising superpower as a premier developer and manufacturer of gas turbine engines. As the Global Times reported, Chinese premier Li Keqiang has issued written instructions suggesting that breakthroughs in developing advanced turbines engines is a high priority necessary to enhance overall Chinese economic and military power.

While China has not been successful in innovating decent jet propulsion technology just yet, it is only a matter of time before Beijing discovers the secret to developing a producible and reliable jet engine. Once that problem is solved, the Chinese aviation industry—and with it Beijing’s military prowess—will grow in leaps and bounds.