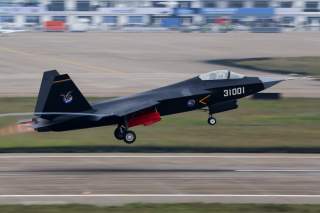 China has built the world’s largest aircraft carrier dock in its naval base in the South China Sea.

This week the Canadian-based Asian security magazine, Kanwa Asian Defence, reported that China had completed work on a 700 meter-long dock at its sprawling Sanya naval complex in Hainan province in the South China Sea. According to the report, the dock is able to service ships on both sides, allowing it to accommodate two aircraft carriers or other large ships at the same time.

That would make the new dock the longest in the world. Indeed, the report noted that America’s aircraft carrier docks in Norfolk, Virginia, as well as its carrier base in Japan, were between 400 and 430 meters long.

A Chinese defense official confirmed the reports during a press briefing on Friday. In response to a question about the Western report, Yang Yujun, a spokesperson for China’s Defense Ministry, said that “The onshore support facilities includes docking ports for the aircraft carriers, airports, training facilities and so on.”

Other reports in China’s state-run media said that the aircraft carrier dock had been completed in November 2014. They went on to say that “the base incorporates a pier which can dock large ships on both sides, suggesting that two carriers can dock at the PLA Navy's carrier bases at the same time.”

Chinese officials had previously said that construction on the aircraft carrier base began in 2012, and China’s sole aircraft carrier, the Liaoning, docked at the Hainian base briefly in September 2013. The Liaoning’s home port is at the Dalian naval base in northern Liaoning province.

According to the Kanwa report, the new dock is connected to the PLA Navy’s Yulin nuclear submarine base, making the Sanya complex the largest naval base in all of Asia. It is also strategically located in the South China Sea.

"There might need to be more construction work at the Sanya carrier base to develop it further [to cater to other vessels]. So far it is just able to accommodate two-way rapid replenishment for two aircraft carriers," Li said, SCMP reported.

He added: “China will finish two home-built aircraft carriers, and more large vessels will join those two to form fighting flotillas. That means that more docks and ports need to be ready not only in the south but also in the north."

China claims nearly the entire South China Sea, parts of which are also claimed by the Philippines, Vietnam, Malaysia and Brunei. China also has overlapping claims with Indonesia but Jakarta does not officially consider itself to be a claimant to the South China Sea dispute.

Incidentally, in his press conference on Friday, Yang Yujun, the Defense Ministry spokesperson, also accused the United States of trying to militarize the South China Sea.

"China is extremely concerned at the United States' pushing of the militarization of the South China Sea region," Yang said, adding: "What they are doing can't help but make people wonder whether they want nothing better than chaos."

Zachary Keck is the managing editor of The National Interest. You can find him on Twitter: @Zachary Keck.