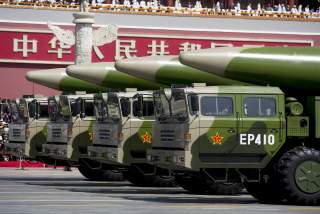 This week, China's Ministry of Defense posted a terse statement announcing a test. “China carried out a land-based mid-course missile interception test within its territory on Feb. 5, 2018 and achieved the desired test objective,” the statement said. It concluded by saying,“The test is defensive in nature and not targeted against any country.”

No other details were included in the statement, including what system was used in the test, leaving analysts to speculate. Many believe China was testing its SC-19 missile. The SC-19 was most famously used as the payload booster in 2007 when Beijing destroyed a weather satellite in orbit, sparking an international firestorm over the resulting space debris. Since then the system has repeatedly been tested for what China claims is ballistic-missile defense purposes. For instance, China was believed to have used the SC-19 during missile-defense tests in 2010 and 2013.

As some analysts were quick to point out following the test this week, the SC-19 is only useful against medium-range ballistic missiles. Under the terms of the Intermediate-Range Nuclear Forces (INF) Treaty, neither the United States nor Russia is supposed to field ground-based medium-range missiles, although Washington accuses Moscow of currently being in violation of the INF.

This fact led many to conclude that the recent antiballistic-missile test wasn’t done with the United States in mind, but rather regional nations. “This missile system is designed to intercept medium-range ballistic missiles, and Washington does not deploy those in the Asia-Pacific,” Sam Roggeveen, a senior fellow at the Lowy Institute in Australia, told the Associated Press. “On the other hand, both North Korea and India do have such missiles, so this test is more about them.”

Zhao Tong, a fellow at the Carnegie–Tsinghua Center for Global Policy, also said the system had countries like India and North Korea in mind, while one Chinese military analyst suggested it could be deployed opposite of Taiwan. The United States and South Korea also recently agreed to loosen restrictions on the size of Seoul’s missile payloads, which theoretically gives the country the ability to reach many parts of China with missiles carrying lighter payloads.

It is also possible that China was testing its HQ-19 missile-defense system. Most analysts depict the HQ-19 as being similar to America’s Terminal High Altitude Area Defense (THAAD) system, which intercepts missiles during their terminal phase rather than during their midcourse phase. Based on the limited imagery of the HQ-19 available, this comparison seems valid. Still, in its latest report to Congress on China’s military modernization, the Pentagon stated, “When operational, the HQ-19 may fill the midtier of China’s BMD network. China has tested the HQ-19 interceptor missile specifically used for intercepting a ballistic missile at mid-course, according to regional media.” The report went on to say “The HQ-19 is still undergoing PLAAF-organized testing; as of May 2016, China was focused mainly on testing the HQ-19’s capability to intercept 3,000 km ranged ballistic missiles.”

The HQ-19 and SC-19 are believed to be extremely similar. According to Joseph Trevithick at The Drive, the SC-19 is a derivative of the HQ-19 that combines portions of the latter missile “with [the] significantly larger rocket motor from the Kaituozhe-1 space launch vehicle.” Past tests have seen conflicting reports about whether an SC-19 or HQ-19 was tested. China seems to be fine with the ambiguity.

This confusion points to a larger question of whether China is actually testing a ground-based ballistic-missile defense system or rather an antisatellite (ASAT) weapon. China and America have often disagreed publicly about what Beijing was up to in similar circumstances. After the international condemnation of its 2007 ASAT test, Beijing has shied away from overtly testing ASAT capabilities (i.e., destroying satellites in orbit, which creates debris). However, the United States has accused it of continuing to test ASAT weapons under the guise of missile defense.

For instance, in July 2014, China announced that it had conducted a ballistic-missile defense system, issuing a similar statement to the one this week. U.S. officials disagreed. “Despite China’s claims that this was not an ASAT test; let me assure you the United States has high confidence in its assessment, that the event was indeed an ASAT test,” Frank Rose, then the assistant secretary of state for arms control, verification and compliance, later claimed in a speech. “The continued development and testing of destructive ASAT systems is both destabilizing and threatens the long-term security and sustainability of the outer space environment.”

The same dynamic was evident in a similar 2010 test. A State Department memo later published by Wikileaks shows that the United States believed an SC-19 was used in that test, and questioned China about whether it was actually being used to further its ASAT capabilities. In reality, both missile defense and ASAT capabilities could be furthered by the test, although the technological requirements are not identical. As the cable published by Wikileaks stated: “This test is assessed to have furthered both Chinese ASAT and ballistic missile defense (BMD) technologies.”

There are other questions surrounding the test this week. For instance, it isn’t clear if it actually involved the interception of a missile. Regardless, Chinese analysts continue to maintain that Beijing intends to build both ground-based and sea-based ballistic-missile defense systems in the years ahead. Currently, however, it is believed to be substantially behind the United States in acquiring the necessary technology.