"China is Competing Today with the United States" 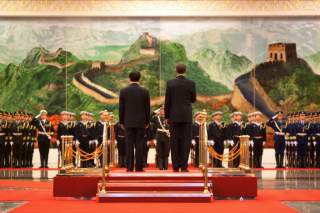 In June 2012 I wrote an article for CSIS:PacNet titled "China. There, I said it" in an effort to generate a conversation about how the United States was publicly discussing the competitive elements of its relationship with the People's Republic of China (PRC). At the time, I felt like there was an unnecessarily tight muzzle on our civilian and military leadership that prevented the US from having a frank and honest conversation about the subject. If Congress is going to be asked to marshal the resources to sustain its enduring interests in the Asia-Pacific region--including a balance of military power that favors the US and its allies--I contended that the administration and specifically the Pentagon would only be successful if they were comfortable publicly making the case why these investments were required.

Two years on, I have observed occasional improvements in the discourse. Between President Obama's strong position on the Senkaku/Diaoyu islands before his recent trip to Asia, Secretary of Defense Chuck Hagel's forceful speech at the Shangri-La Dialogue, or Assistant Secretary of State Danny Russel's stern testimony on maritime disputes in the region, the statements and testimony from administration officials and the president himself in the past two years have taken on a new level of seriousness toward China.

However, in military and security terms we still struggle to communicate how the defense budget is being built to manage the security competition with China. For instance, our military's capabilities for anti-surface and anti-air warfare, counter-mine operations, missile defense, long-range strike, and base resiliency are increasingly discussed in public briefings and strategy documents. Unfortunately, there is a tendency to justify these missions as an end in themselves rather than explain why they have taken on a newfound importance. Classified briefings will continue to be used to translate this information to the Congressional defense committees, but if the Pentagon aims to justify its budget to Congress as a whole and avoid further rounds of sequestration cuts, for instance, it will need to move beyond discussing missions and programs to identify the actual risks associated with failing to counter China's emerging military capabilities.

Despite this shortfall, the War Colleges should be given credit for the public work their academics have produced. Specifically, the China Maritime Studies Institute (CMSI) and a number of professors at the Naval War College have generated large volumes of open-source analysis of Chinese military developments. Their work has been so successful that I understand the Air Force is eager to replicate it by setting up a similar institution to study the People's Liberation Army Air Force (PLAAF). I applaud the War Colleges and the services more generally for taking a lead in this area.

But while there have been some positive developments, I was reminded last week of the persistence of this problem when the Chief of Naval Operations, Adm. Jonathan Greenert, responded to a question from a Naval War College student at the Navy's Current Strategy Forum about how US naval professionals should discuss "tactics, techniques and procedures [on] how to counter Chinese ships and aircraft." Greenert replied without hesitation: "If you talk about it openly, you cross the line and unnecessarily antagonize..You probably have a sense about how much we trade with that country, it's astounding." Following the panel, he doubled-down on his position with reporters, contending that "it would be antagonistic to any country to openly say that we are preparing [for conflict]."

Let me be clear: I have tremendous respect for the CNO and the work he is doing. But I have to respectfully disagree with him on this issue. The perspective that we cannot talk about China's military or strategic goals and what we are doing to offset them because we will antagonize Beijing is exactly the wrong policy for the Navy and for our nation.

Several brief points on this topic are worth reviewing. First, as I wrote two years ago, our military and civilian leaders need to speak clearly about the PRC and the military and security competition now ongoing in the western Pacific Ocean and beyond. I am not implying we need to be abrasive or obstinate in how we discuss this policy issue. Instead, our leaders should speak with clarity when China bullies its neighbors, seeks to unilaterally revise the status quo, challenges freedom of navigation, directs economic espionage, and as it continues to build military capabilities that undermine the US security guarantee in the region, among other issues. If the US expects to remain the leader of a rules-based international system and welcome China as a responsible international stakeholder, Washington will need to clearly articulate its interests, describe when and how China is impinging on those interests, and develop strategies for mitigating Beijing's actions.

Second, if we resign ourselves to a policy of self-censorship about China's assertive actions and growing military power for fear it will antagonize them, we will be granting Beijing a veto over what we can and cannot say. Instead of stabilizing the relationship as some argue, China will gain control over the conversation and could move the "goalposts" as they please. As some astute observers have reminded me, such behavior could result in a sort of "Finlandization" of public discourse in the US.

Third, the real foundation and strength of our democracy is that we believe in and cultivate a marketplace of ideas. To let Beijing dictate to us the parameters of our domestic conversation about their rise and role in Asia out of a fear for how they might react would limit the transparent process by which our nation generates sound foreign policy. In short, we would be doing ourselves a disservice if frank conversations about China and US policy are only being generated within our academic and think tank communities.

Fourth, great powers need to have thick skin. The US is criticized domestically and across the globe, but while our government will seek to shape perceptions of its actions and respond to criticisms, it does not assert that such critiques are off limits or seek to punish the perpetrators. If China is indeed ascending to the position of a great power--which I believe they are--they too need to be able to listen to criticism and assess their actions without simply resorting to retaliation. The sooner China understands this, the better it will be for Beijing, Washington, and the rest of the Asia-Pacific region.

Finally, despite my concern with the CNO's recent comments, I look forward to the release of a new Maritime Strategy (Navy-Marine Corps-Coast Guard) this fall that takes a clear perspective on China's military modernization and the role US seapower needs to play in balancing (not containing) against it. The previous maritime strategy from 2007 was deficient in that it failed to even mention China. Build a 313-ship fleet, it implored, but then failed to offer justification for this fleet design short of vague references to preventing war. If the Navy desires new capabilities to retain its competency to conduct sea control, power projection, and cross-domain access, it will need to explain why, after two decades of maritime dominance, these missions are again being challenged. The Navy must explain why it needs a fleet of a specific size, munitions of a certain range and quantity, aviation assets outfitted with electronic attack or stealth capabilities, and sailors trained for traditional warfighting missions we once determined would no longer be required.

China is competing today with the United States. We cannot afford to abide by the axiom that if we treat Beijing like a competitor they will become one or if we are critical of their behavior it will antagonize them and upset our best laid plans. With all of the challenges the US is facing in Asia and around the globe, now is the time for elected officials, military leaders, and policymakers to lead a thoughtful, respectful, and frank discussion about the nature of our relationship with China. Preparing our democracy for what will be an extended peacetime competition in the Asia-Pacific demands no less.

Rep. J. Randy Forbes (R-VA) is the Chairman of the House Armed Services Seapower and Projection Forces Subcommittee and co-chair of the Congressional China Caucus. This article was original published by CSIS: PACNET here.