China and El Niño Are Killing the Mekong River 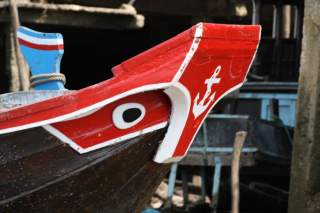 While this year’s El Niño pattern has brought long overdue rain to my home state of California, it has created a devastating drought in Southeast Asia. It’s the worst crisis in 60 years, and it is triggering everything from fires to feuding farmers in a region of the world heavily dependent on both fish and rice. The canary in the proverbial coal mine that most stands out in this crisis is the beleaguered Mekong River. Its source is high up on the Tibetan plateau—which China has controlled since invading Tibet in the 1950s.

Along the Mekong’s more than 2,700 mile-journey, this river wends its way first through China’s Yunnan Province and then progressively through Myanmar, Thailand, Laos, Cambodia and Vietnam before pouring—but is now trickling—into the South China Sea. Along this way, the this rice paddy-sustaining river serves as a key transportation artery, major food source, and critical water supply for fully sixty million people.

What this year’s El Niño drought has done is to put an exclamation point to the slow, twisting death of the Mekong River that is being administered by a China that is water and electricity hungry. The underlying problem is China’s massive dam building upriver that, in this year’s drought, has helped pushed part of the Mekong to their lowest levels in almost one hundred years.

It’s not just the threat to the fish population these low river levels are leading to. In Vietnam, for example, saltwater has washed almost forty miles into the interior. This is having a devastating impact on prime rice growing areas: 1,500 square miles of paddies have been affected while 640 square miles have already been rendered infertile.

In Thailand, the situation is equally acute. For example, the Ubol Ratana reservoir, which is fed by a tributary of the Mekong, ran completely dry in April. This means no irrigation water, no electricity generation, and a massive fish kill. (On a personal note: this crisis hits very close to where I once called home. As a Peace Corps volunteer working in aquaculture a few hundred miles from this reservoir, I spent many hours with villagers building and upgrading fishponds as part of the Monsoon ritual.)

China’s massive dam building is a powder keg waiting to explode. The problem here besides China’s favorable upstream position is that its overwhelming size and military strength has allowed an Imperial China to have its way with its new downstream vassals—and now the bill is coming due in the form of hunger, poverty, and slower growth for China’s neighbors. As for the megadams themselves, the scale is breathtaking. As I warned a decade ago about these “damnable dams”, China’s grand Mekong River design will eventually include fifteen large dams capable of controlling the entire headwaters of the Tibetan Plateau. The first two dams, the Manwan and Dachaoshan, were completed in 1993 and 2002, respectively. Together, they generate close to 3,000 megawatts of electricity—equivalent in output to about three large nuclear reactors. The third, Xiaowan Dam, was completed in 2010, and at sixty-six stories, it is as one of the largest dams on the planet.

Even before El Niño, China’s megadams on the Mekong had begun to severely affect the seasonal flow of the river. From Beijing’s perspective, this is a good thing because it allows them to run large ships along the Mekong year round while at the same time preventing seasonal flooding. However, the downstream perspective differs decidedly.

To understand why, consider the impacts of China’s dams on one of the world’s most fascinating ecological treasures, the legendary Lake Tonle Sap in Cambodia. For much of the year, the lake is only a yard deep with an area of only a bit more than 1,000 square miles. During the rainy season, however, flow from the Mekong River helps deepen the lake to roughly thirty feet and increases the area of the lake more than fivefold. This turns Lake Tonle Sap into one of the best breeding grounds for fish in the world. The obvious problem facing the Tonle Sap is that the China’s megadams will even out the flow of water and thereby prevent the world’s most fertile natural fishery from realizing its full depth and breadth in the critical fish breeding season. Already, fish catches have declined dramatically. In addition, the Mekong is now much more prone to rapid rises and falls as an upstream China regulates its own rivers, seemingly oblivious to the natural habitat and concerns of its downstream neighbors.

The nation most at risk from China’s Mekong River dams may well not be Cambodia but rather Vietnam—the “last stop” of the Mekong on its way to the South China Sea. If anyone thinks that the mighty Mekong cannot go dry during certain periods of the year as it approaches Vietnam, remember that the once-mighty Yellow River in northern China now runs dry more than two hundred days a year. In an age of El Niño, the death knell for the Mekong has already begun to sound. The only question is whether China will continue its turn of its damnable dam screw on the water-deprived countries not just of Southeast Asia but India and Bangladesh as well, which China is affecting as well. Here, Beijing may well wish to heed the warning that desperate countries may wind up doing very desperate things and share the water resources it controls at the spigot in a far more responsible way.

Peter Navarro is a professor at the University of California-Irvine, director of the documentary film Death By China, and author of Crouching Tiger: What China’s Militarism Means for the World (Prometheus Books). His website is www.crouchingtiger.net