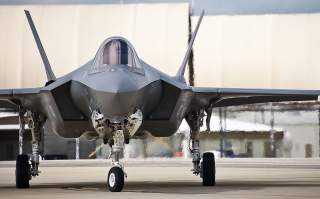 According to CCTV—China’s state television network—the J-20 participated in exercises with other People’s Liberation Army (PLA) assets including ground, air, naval and rocketry forces. However, the J-20 is only in service in very limited numbers because China is unable to mass-produce the aircraft’s indigenous WS-15 engines. Indeed, most western analysts had believed the J-20 was powered by Russian-made Salyut AL-31FN motors, but sources told the South China Morning Post (SCMP) that was not the case for production aircraft.

“There are still a series of technical problems that need to be tackled [on the J-20], including the reliability of its WS-15 engines, [and the plane’s] control system, stealth coat and hull materials and infrared sensor,” a Chinese source close to the PLA told SCMP.

China made the decision to operationally deploy the J-20 despite its technical problems because of the threat posed the by Lockheed Martin F-35, according to the SCMP’s source. Indeed, more of the stealth fighters are scheduled to join the PLAAF later this year. “It’s urgent for China to show off its achievements as soon as possible,” the source said.

However, while Beijing is trying to rush the J-20 into service to counter the F-35, the Chinese machine is not likely to be a directly analogue to the American jet or its stablemate, the Lockheed Martin F-22 Raptor. The J-20—which appears to be larger than Raptor—is more likely designed to attack the support elements that hold American air operations together such as tankers, AWACS and JSTARs radar planes. Over the vast reaches of the Pacific, where fuel is at a premium, destroying a tanker could achieve the same result as shooting down an enemy fighter.

China is developing the ramjet-powered PL-15 that could have a range as great as 120 miles. The PL-15 weapon has caused consternation within the top-ranks of the U.S. Air Force with Air Combat Command commander Gen. Herbert “Hawk” Carlisle citing the Chinese weapon as one of the pressing reasons for the United States to develop a next-generation replacement for the decades-old AIM-120 AMRAAM.

“How do we counter that and what are we going to do to continue to meet that threat?” Carlisle asked during a speech at the Center for Strategic and International Studies in 2015. Later, during an interview with Flightglobal, Carlisle said that countering the new Chinese missile was an “exceedingly high priority” for the U.S. Air Force. “The PL-15 and the range of that missile, we’ve got to be able to out-stick that missile,” Carlisle said.

Air Combat Command acknowledges the problem and is designing  its forthcoming Penetrating Counter Air sixth-generation replacement for the F-22 to operate at extreme long ranges. “That is a strategy others have advertised and we’re familiar with,” Col. Tom Coglitore, chief of Air Combat Command’s Air Superiority Core Function, told me last year. “We’re analyzing what potential adversaries have indicated they would do and then we obviously have to come up with our own capability to make sure we can still conduct the mission and create the effects desired. So, we’re aware is the short answer and we will be prepared to counter it.”