China to Get Russia's Lethal Su-35 Fighter This Year 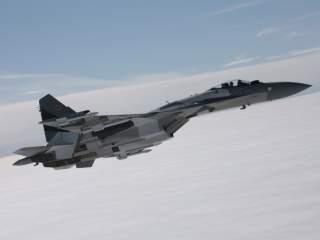 "Supplies of fighter jets will start in the 4th quarter of this year. For now, everything goes according to plan," a Russian military-diplomatic source told the TASS late last week.

Russia signed a contract to deliver twenty-four Su-35 fighters worth more than $2 billion to China late last year. The contract will be filled within three years according to TASS’s source. Production of a modernized S-108 communications system—which was part of Beijing’s requirements—has already started.

While the addition of the Su-35 will boost Chinese capabilities while the PLAAF waits for its fifth-generation J-20 to enter service. The Su-35S is the most potent version of the Flanker built to date. The powerful twin-engine fighter is high flying, fast and carries an enormous payload. Combined with its advanced suite of avionics, that makes the Su-35 an extremely dangerous foe to any Western fighter with the sole exception of the stealthy Lockheed Martin F-22 Raptor.

“It’s a great airplane and very dangerous, especially if they make a lot of them,” one senior U.S. military official with extensive experience on fifth-generation fighters told me some time ago. “I think even an AESA [active electronically scanned array-radar equipped F-15C] Eagle and [Boeing F/A-18E/F] Super Hornet would both have their hands full.”

One Air Force official with experience on the Lockheed Martin F-35 Joint Strike Fighter has told me that the Su-35 would also pose a serious challenge for the stealthy new American jet. The F-35 was built primarily as a strike fighter and does not have the sheer speed or altitude capability of the Su-35 or F-22. “The Su's ability to go high and fast is a big concern, including for F-35,” the Air Force official explained me.

The sale of the Su-35 to China is in many ways a reflection of Russia’s weakened bargaining position. The Russians had initially insisted that the Chinese buy a minimum of forty-eight jets because of fears that Beijing simply wanted to harvest the Su-35 for its technology—particularly, the radar, electronic warfare systems and engines.

The new deal does not allow for China to license build the Su-35—but that shouldn't stop Beijing from mining the Su-35 for its technology. With access to a working aircraft, Chinese engineers will be able to learn more about the jet’s AL-41F1S engine, Ibris-E radar and electronic warfare suite. While in recent years China has have made huge technological advances of its own, Russian military technology—particularly for jet engines—is light-years ahead. Once the Su-35 is delivered, the jets are almost certainly to be reverse engineered and copied. One can initially expect advanced derivatives of the J-11 Flanker clone, but an entirely new Su-35 clone might follow as well.