Is China Getting Ready to Build Its Own Lethal Tomahawk Cruise Missiles? 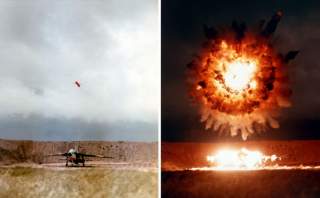 While the Russian Kalibr cruise missile continues to capture the spotlight in Syria, on the other side of the globe, the Chinese People’s Liberation Army is also developing advanced long-range precision strike weapons. Indeed, Chinese designers are hoping to develop a family of modular cruise missiles that could match many of the capabilities found onboard the U.S. Navy’s Block IV Tomahawks—including the ability to retarget in-flight.

“Our future cruise missiles will have a very high level of artificial intelligence and automation," Wang Changqing, director of the General Design Department of the Third Academy of the China Aerospace Science and Industry Corp told China Daily. “They will allow commanders to control them in a real-time manner, or to use a fire-and-forget mode, or even to add more tasks to in-flight missiles.”

But China is not content with developing a single variant of its next-generation cruise missile. The new missile will be developed as a modular weapon that could be tailored for specific applications—similar in concept to the Russian Kalibr, which is made in multiple variants for different types of missions. “We plan to adopt a 'plug and play' approach in the development of new cruise missiles, which will enable our military commanders to tailor-make missiles in accordance with combat conditions and their specific requirements,” Wang told the Chinese publication on the sidelines of the 2016 Hiwing Forum in Beijing.

According to a senior Chinese researcher cited by China Daily, the Chinese hope that the new approach will help reduce the weapon’s research and development costs as well as reduce sustainment costs. It should also afford the People’s Liberation Army more flexibility for employing the weapon. “It is a promising approach in terms of the design of next-generation missiles, but we should also consider its technological complexity and production costs,” the Chinese research said.

The fact that Beijing is pursuing very advanced precision-guided long-range strike capabilities that are at least on par with American developments should come as no surprise. The People’s Liberation Army already has a host of advanced cruise and ballistic missiles that have either already been fielded or are currently under development—the most prominent of those being the DF-21D, DF-26 and the DH-10. Indeed, while ballistic missiles such as the DF-26 often capture the lion’s share of the attention, cruise missiles afford Beijing a potent and effective long-range punch.

“Its cruise missiles are some of the most flexible, stealthy and deadly weapons that the PLA has at its disposal,” write analysts Peter Singer and Jeffrey Lin in Popular Mechanics’ Eastern Arsenal. “Cruise missiles have several advantages over ballistic missiles; they can be updated during flight on battlefield changes, their low flight altitude makes them very stealthy against air defense radars, and fuel efficient turbofan engines allow cruise missiles to be lighter and cheaper than their ballistic counterparts.”

While the DH-10 was thought to have offered similar capabilities as earlier versions of the Tomahawk or the U.S. Air Force’s AGM-86C/D CALCM, China’s next-generation missile seems likely to match or exceed the capabilities of even the latest Tomahawk Block IVs. Thus, the Pentagon will have to invest in defensive capabilities to counter such weapons and continue to work on developing a successor to the Tomahawk and CALCM.

More importantly, Chinese advances demonstrate why the Pentagon must press ahead with its Third Offset strategy to maintain America’s lead over potential adversaries. It’s clear that America’s potential great power challengers are rapidly closing the technological gap that has afforded U.S. forces nearly total dominance on the modern battlefield since the end of the Cold War.