Is China Getting Ready to Develop the World's Fastest Plane? 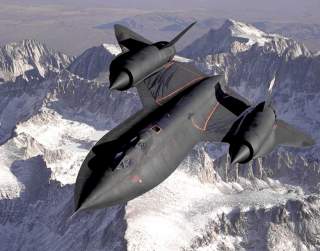 China’s military over the last twenty years has worked at breakneck speed to develop weapons platforms that have created a certain amount of concern in capitals all over Asia and in Washington. And if reports prove correct, Beijing might be able to add one more military marvel to its list of accomplishments—the world’s fastest plane.

According to various reports, China is planning to develop a domestically crafted turbofan ramjet engine. Such an engine—at least in theory—could be the foundation for a jet faster than the legendary U.S. SR-71 spyplane, the fastest air-breathing manned aircraft, retired in the late 1990s.

The WantChinaTimes reports that:

“An Aug. 25 report in Beijing-based newspaper China Aviation News praised the engine division of Xi'an-based aeronautic and aerospace firm AVIC Qingan Group for its achievements in several projects, raising speculation that China may be preparing to develop an aircraft with a higher speed than the US Lockheed SR-71 Blackbird strategic reconnaissance aircraft, according to Shanghai-based news web portal New Outlook.

The report mentions a planned project which would see the development of China's first domestically-made turbofan-ramjet combined cycle engine, designed for an unnamed aircraft. The description of this engine suggests something resembling the Pratt & Whitney J58 variable cycle engine used by the SR-71 Blackbird, which is also often described as a turbofan-ramjet engine, due to its unique bleed from the compressor to the afterburner which allows for increased thrust at high speeds.”

Indeed, the report goes on to note:

“A source close to the PLA Air Force was cited by New Outlook as stating that this is part of a project to develop a manned supersonic aircraft, currently in the preparation stages at a domestic research institute. The aircraft is expected to have a top speed faster than the Blackbird on completion, according to the source, although the project is yet to be formally launched.”

While China is likely years away from developing its own SR-71 style spyplane, and other types of intelligence gathering (think modern satellites, drones, etc.) have largely removed the need for such an aircraft, the “blackbird” still holds a special place in many aviators’ hearts around the globe—especially those who flew it. And in fact, America might be developing its successor.

“The SR-71 served six presidents, protecting America for a quarter of a century. Unbeknownst to most of the country, the plane flew over North Vietnam, Red China, North Korea, the Middle East, South Africa, Cuba, Nicaragua, Iran, Libya, and the Falkland Islands,” explained Brian Shaul, a former SR-71 pilot in a recent article for Gizmodo.

“On a weekly basis, the SR-71 kept watch over every Soviet nuclear submarine and mobile missile site, and all of their troop movements. It was a key factor in winning the Cold War.”  notes Shaul.

“I am proud to say I flew about 500 hours in this aircraft. I knew her well. She gave way to no plane, proudly dragging her sonic boom through enemy backyards with great impunity. She defeated every missile, outran every MiG, and always brought us home. In the first 100 years of manned flight, no aircraft was more remarkable.”

While America’s SR-71 is long since retired—in fact, I have been able to see the mighty Cold War plane up close right outside of Washington—the development of such a capability for China might serve a number of functions.

For starters, any developments in the domestic production of more-sophisticated and reliable jet engines would be a boon for Beijing. At the moment, China is highly reliant on Russia for fighter engines, and in fact, reports indicate its J-20 fifth-generation fighter is powered by Moscow’s advanced engines. Being able to develop top-tier engines for for a SR-71-style plane would be a major step up for China’s engine manufacturers.

One must also factor in the prestige of developing a plane that could very well take the speed crown away from America. Imagine the plane being used in all sorts of propaganda-style footage for the People’s Liberation Army or flying over Beijing during military parades in the future—a sure sign of China taking its place among the great powers.

Now if the Chinese economy would just cooperate.